High Arctic’s technicians are no strangers to bad weather and use a risk matrix to make decisions around travelling when the roads get bad.

To stay ahead of the competition, rental companies do their best to go above and beyond for their customers every single day. But for those that deal with Canada’s northern climate – and service a cyclical, vulnerable, primary industry to boot – good service needs a little extra attention.

For the rental division of High Arctic Energy Services (officially HAES Rentals but known as High Arctic), it’s all about maintaining excellent relationships with their roughly 30 core customers and maximizing their ability to package their offerings.

High Arctic, now a publicly-traded firm, was founded in 1993. It started out offering drilling and specialized well completion services in the oil and gas industry, doing a lot of what’s called ‘snubbing,’ which is moving pipe in and out of pressurized wells.

Then, around 2012, company leadership looked to expand into rentals. “We were renting a lot of equipment to do our own work and, by 2016, we’d purchased the assets of Tervita Rentals, including its Whitecourt and Cold Lake locations,” explains Rentals manager, Trevor Barker. “I joined the company in mid-2017, taking over for my boss, Dan, who retired, and we rebranded late that year.”

The company services all of Alberta and sometimes into the Northwest Territories, with regional offices across Western Canada, the U.S. Rocky Mountain region and in Papua, New Guinea. The Canadian headquarters are just outside Edmonton.

High Arctic Rentals’ main outlet is in Cold Lake, about three and half hours’ drive northeast of Edmonton along Highway 28, not far from the Saskatchewan border. The other two locations are located northwest along Hwy 43, the main oil sector highway. Whitecourt is about two hours’ drive from Edmonton, and Grande Prairie is about four and half hours out from the city.

The High Arctic rental team is small but mighty. Barker oversees six rental technicians at the three outlets who deliver, pick up and maintain close to 1,600 pieces of equipment as needed – and in all kinds of weather.

“The winter can be a problem,” says Barker. “When the roads get bad, the techs have a risk matrix to refer to for decision making and we also use a ‘journey management’ company. If needed, if it’s really snowy for example, my guys will call its 800 number and the company connects with them at various check-in points. If a truck needs to be located, we use our GPS system.” But the pressure to get equipment delivered today is not nearly as intense as it was in the ‘90s, Barker notes. “The conversation with customers is different nowadays and people are more understanding of the risks to workers and equipment.”

Barker’s six rental technicians have all been with the company for years, and Barker credits two factors for the low turnover. First, a Rentals job is more stable compared to more cyclical oilfield work. Second, Barker believes every member of his team enjoys providing excellent service to long-standing customers. “It comes down to how fast we answer the phone, how fast can we deliver, how we speak to our customers and make sure we get their needs met,” he says.

While the rental technicians do general maintenance and small repairs, for big repairs as needed Barker calls on a roster of licenced heavy equipment mechanics, some of whom might work for the very customers renting the High Arctic equipment needing repair.

Besides great customer service, the other way that High Arctic stands out is through its ability to bundle. For example, it can combine rental of a hydraulic catwalk (more on them later) and an office trailer with a service rig. Barker explains, “We used to be like our current service competitors, only providing services and having to go to a rental firm to get what was needed. Or the customer would have to do that. But we offer it all, so it’s easy. The more we can offer, the better.” 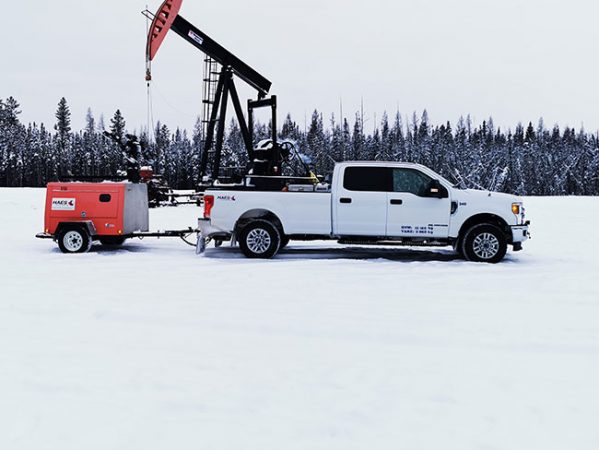 High Arctic has already begun retrofitting for efficiency and sustainability by installing LED’s in place of older halogen fixtures.

“Since rentals started in 2016, we haven’t purchased a ton of new things,” says Barker. “I’d say, at the most, probably 60 new items. The catwalks, some pressure control equipment and some power generation such as light plants. The focus has been on retrofitting and recertification of our current fleet to maximise utilization. We are open to future equipment purchases, especially anything that can improve fuel efficiency and environmental sustainability of the oil and gas industry. It’s a necessity. And it’s also important in retrofits.”

For example, High Arctic has already retrofitted some of its light towers by swapping the old energy-intensive halogen fixtures for LEDs, enabling the generators to power much more than lights. Barker is pleased that a lot of the new catwalks are electrically powered (instead of diesel).

Catwalk purchase
In July, High Arctic began acquiring 17 hydraulic catwalks from a company in the Cold Lake area for $1.1 million (previously, High Arctic had only one.) “Catwalks allow remote handling of pipes so it’s much safer,” says Barker. “They’ve been around for a while, and have improved in design over time. In certain areas they’re more in demand. There’s more value in using catwalks when the pipe size is larger, and certainly not every service rig uses them.”

Most of the catwalks are currently deployed with an existing High Arctic customer and as High Arctic incrementally takes possession of them all by the end of the year, assessments and upgrades will get underway. Most of them are ‘skidded’ (moved on a truck) and wheels are being added, for example. The controls are also being upgraded for greater user-friendliness. 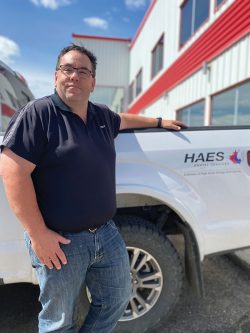 According to Trevor Baker, Rentals manager for High Arctic, all seven of the company’s rental delivery trucks are equipped with GPS tracking for safety.

Covid impact
Before COVID, the High Arctic rental team numbered 11, including Barker. “When Covid hit, the prices of oil dropped and we had to lay five people off,” he says. “I was able to hire one back last year, but the location managers at the other two locations will not be coming back unless there’s something like a massive upswing in the oil patch. Having Teams on everyone’s cellphones and the current activity level in oil and gas means that the seven of us can handle things. I think COVID made businesses across the world look at how they can be leaner and this has resulted in some changes that are now permanent.”

Besides COVID, the only other major recent challenge for High Arctic Rentals has been the general state of the oil and gas industry. “The pressures on the operators have increased,” says Barker, “which puts pressure on us in terms of our rates.”

GPS project
High Arctic’s seven rental delivery trucks all have GPS, and at about $35 per month, per truck, Barker says it’s a good bargain to ensure the safety of his technicians.

However, before COVID, he’d started a project to evaluate whether having GPS on some pieces of rental equipment – basically anything with a motor – would be worthwhile. Monitoring usage means that maintenance can be more efficiently scheduled.

“I think $200 to $400 a year is prettyminimal to monitor usage on a $50,000 piece of equipment, but there are costs that come into play in the field due to lack of cell coverage, having to use satellite phone tech,” Barker explains. “The costs vary too depending how often you want to communicate with the machine. It’s fairly intensive to do the cost-benefit analysis and it will be a while before I have any conclusions. I started before COVID and took a break with COVID, and we’ve also switched GPS companies.”

Barker credits past mentors and his current supervisors for cementing his understanding of the three ingredients for success: safety, customer service and profitability. “They’ve also all encouraged me to broaden your horizons,” he says. “My supervisors are very supportive with that. I’m only three or four courses away from my business management degree and have also taken many personal development courses.”

NOT YOUR REGULAR RENTAL FLEET
Oilfield service requires some stuff you may not have seen before. Here’s a primer on some of the unique items High Arctic stocks.

Hydraulic catwalks
Used to move tubing between the rig floor and the pipe racks. Push/pull catwalks use a ramp and a “skate” that runs on a cable-drive system mounted inside the catwalk deck.

Elevators
Handling tools that close around the “collar” of a tube, allowing it to be pulled out of a well.

Tubing spiders
Similar to elevators and hold the pipe to prevent it from falling down into a well.

Bails
Large hooks that attach to the block (the part that moves up and down) of a drilling or service rig.

Power swivels
Hook onto and rotate pipes in a drilling hole or are used to turn drills that remove obstructions in a drill hole.

Power tongs
Very large, self-locking wrenches that turn pneumatically or hydraulically. They are used to make or “break out” drill pipe, casing or other types of pipe.

Adapter spools
Used to connect two pieces of equipment that have oil or gas running through them at different pressure levels.