It’s the annual rite of spring for the equipment and event rental industries. Once again, thousands of rental store owners, managers and workers got together to look over the latest technology, make valuable connections, meet friends and pick up business tips. 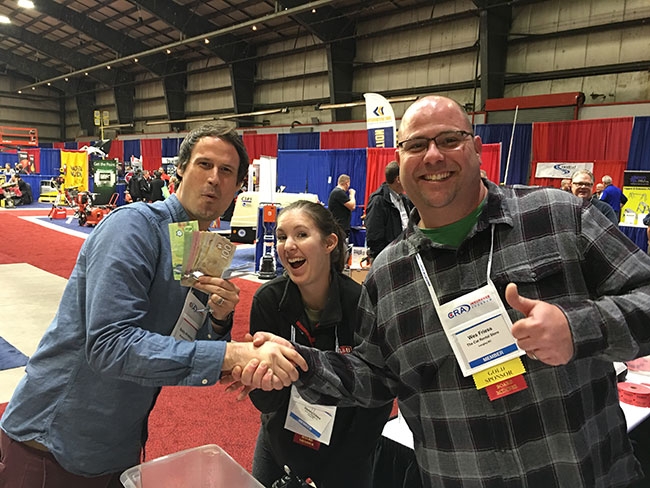 People do love to win stuff. Shows across the country offer door prizes It’s the annual rite of spring for the equipment and event rental industries.

These are the events that bind us together as more than a collection of businesses – they define us as an industry.

Canadian Rental Mart
The Canadian Rental Mart saw its move to the International Centre in Mississauga attract about 200 attendees from 79 different rental stores. While not as large as some past crowds, exhibitors noted the quality of attendees was excellent, with visitors typically being owners or senior managers with buying authority. These influential industry leaders toured a 40,000-square-foot show floor featuring a full selection of rental-ready equipment from Canada’s top suppliers.

“The comment I’m hearing is that this is the place you need to be to meet the people who make decisions,” said Ken Mallott of Kensal Rental in London, Ont. “I think that’s a strong message about the show.”

Two training sessions attracted about a dozen students each. Lucie Giroux of Sunbelt Rentals trained her group to act as their company’s safety inspector, and Genie’s Scott Owyen conducted mobile elevated work platform operation training. The Ontario banquet looked to have about 100 diners enjoying a delicious dinner served by the Delta hotel. Attendees voted for the winner of two tables decorated by party store members, with Higgins Event Rentals taking the contest. The main event of the banquet was the presentation of the Ontario Canadian Rental Association awards. Honours went to Cavalier Industries for Supplier of the Year and Michelle Nichols of Higgins Event Rentals for Rental Professional of the Year. The CRA Ontario Regional Award was given to Gord Ellis of Cavalier. The General Tool Image Award went to GAL Power and Higgins Event Rentals took the podium yet again for the Party and Event Image Award.

The ARA Rental Show
New Orleans was home to the 62nd edition of The Rental Show, which ran from February 19 to 21. For Canadians, the event started on the Sunday night with the very popular Canadian Rental Association hospitality night. Almost 400 people crowded into the Generations Hall to exchange rental tales and enjoy beverages, finger foods and renew acquaintances.

The following day, the rental show was officially opened by a keynote presentation by Canadian-born Jonathan and Drew Scott, hosts of multiple HGTV series including the Emmy-nominated “Property Brothers,” “Brother vs. Brother” and “Property Brothers at Home.” They mixed humour with some of their life experiences as they told the story of their start and rise to fame in business.

Following the keynote session the show floor, featuring over 700 exhibitors, opened to a steady stream of rental operators looking to upgrade and re-stock their rental fleets. Canadian Rental Service caught up with Jeremy Andrew of Prairieland Rentals and Sales from Regina, Sask., on the floor and he mentioned he attends the show each year for the socializing and networking opportunity that the show presents. He also compared notes with salesmen from the different companies that he does business with.

On Monday afternoon, the CRA held their annual AGM. Tim Ranson led the meeting, which started with Hank McInnis reviewing the past year’s significant activities. John Gillespie from Western Financial Group gave an overview of the CRA self-protected insurance program. He reported that 291 locations are presently using the program and an anticipated 21 per cent return on premiums will be paid back to the members based on the excellent results that the program had in 2017. Mike Maltby of Ingersoll Rent-All was then introduced as the CRA president for the coming year. A number of awards were presented as follows:

The trade show continued both Tuesday and Wednesday with brisk buying activity reported on the show floor by exhibitors across the hall. Attendance was reported as 6,047 rental store owners and staff representing 2,657 separate stores. Total attendance for the event (including suppliers) was 12,066. Plans are already underway for the 2019 edition, which will be held in Anaheim, Calif., from February 17 to 20.

B.C. Regional Trade Show
The Canadian Rental Association’s B.C. trade show took place Jan. 20, featuring some good energy and an uptick in attendance from local rental stores. The CRA reports a 12 per cent increase in attendees over the year before, with 45 per cent of local member houses coming to the event. Absolute numbers were not available, but there were 16 tables at the banquet, which translates to around 130 guests including vendors.

The show followed its usual format running Friday evening and Saturday at the Agriplex barn at the Cloverdale Exhibition grounds in Langley, B.C. Vendors reported some good activity fuelled by the ongoing strong B.C. economy. Draws were held for Show Bucks valid at any exhibiting vendor, a 50/50 prize and a table full of other prizes throughout the day.

Banquet attendees heard from Colin Wilson of A World of Rentals in Kingston, Ont., who was there representing the national CRA board. Wilson is the national Ontario director. Wilson complimented B.C. on the lively event and reminded attendees about the many benefits CRA membership brings. Wes Friess of the Cat Rental Store, a B.C. director, MCed the night.

Rentquip won B.C. Supplier of the Year and Star Rentals was honoured with B.C. Rental Store of the Year. Mike Faulkner accepted on behalf of Rentquip and Rob Potter took the stage to accept for Star.

People do love to win stuff. Shows across the country offer door prizes

Prairie Regional Trade Show
The sun shone brightly as the Canadian Rental Association hosted its annual Prairie Regional Trade Show in Edmonton, Alta., on March 9 and 10. The event started on Friday evening with a hospitality function that included an ample selection of finger foods and adult beverages. A casino night, along with prizes and a silent auction, entertained the crowd that evening. $1,645 was raised for the Doug Mitchell foundation.

The actual trade show was on Saturday at the Edmonton Expo Centre. Forty-nine exhibiting companies filled 120 booth spaces and provided plenty to see for the rental store attendees from across the prairies that attended the event. The $1,000 Show Bucks prize that was offered by the CRA was won by Jennifer Myers from Stettler Sales and Rentals from Stettler, Alta. The other large prize, a Snorkel S3008P scissor lift provided by Ahern Canada, was won by Brent Fillmore from Legacy Equipment in Edmonton, Alta. .

That evening 120 gathered for the dinner banquet back at the DoubleTree hotel. During the business portion of the evening the following awards were presented:

Lastly, the prestigious Dickie-Doo award was won by Trevor Barnes from Rental Experts.

Friday evening began with a meet-and-greet function followed by a warm welcome from the new Atlantic board president, Matt Brun. The record number of attendees enjoyed the delicious group meal that took place in the very hub of the show floor. Sales of the paper bag auction tickets were brisk before, during and after the meal, which made for an exciting auction later.

The entertainment for the night was a very talented
singer and musician, who was able to create a fun and relaxed mood for the remainder of the evening. Our golf game challenge was again a popular activity, with a record amount of money being raised and donated to the Crohn’s and Colitis Foundation.

Saturday began with a hearty breakfast and the AGM, which ran like clockwork, thanks to the Atlantic board. The trade show floor opened soon after and saw lots of deals and demos, right up until the conclusion of the show. There were Show Bucks draws and door prize draws to finish off the event.

QUEBEXPO
by Jasmine Lacoste-McCormick
Back in Drummondville for the second year in a row, 49 companies hailing from Canadian locales such as Gatineau, Rouyn-Noranda, Montreal and Edmonton, and as far away as Europe, China and the United States, attended the Canadian Rental Association’s Quebexpo 2018. More than just an equipment show, the exposition generated valuable networking opportunities for newcomers and regulars with its lunches and ever-popular cocktail hour on opening night.

Returning exhibitors included Skyjack, Contrax Equipment, Kubota, Inteq Distributors and Genie. Dominique Méthot from Rentquip Canada, and associate director on the CRA board, observed that the exposition was enjoying an increased attendance in visitors this year. “Quebexpo is an opportunity for us to meet clients face-to-face who are based far away,” commented Paul Astudillo, market development specialist for Wacker Neuson. One of this year’s newcomers was Pierre Benetreau, CEO and “ringmaster” of LP Tent. The company’s roots as a touring European circus were evident in its patented, steel-framed pop-up tents and inflatables, designed for intuitive set-up. Marie-Pier Vachon, controller for SOSLocation.ca, attended Quebexpo many times as a buyer before setting up her own booth this year to showcase the business’ electric and diesel boom lifts. Wallenstein displayed its signature log splitters and wood chippers, handmade in Ontario for over 25 years. Several vendors highlighted the visibility and partnership possibilities with rental centres offered by the show.