According to Warren Carriere, once you get rentals in your blood, it’s really tough to change industries. Despite starting out on a career path in social work, Carriere found himself bitten by the rental bug more than 14 years ago. 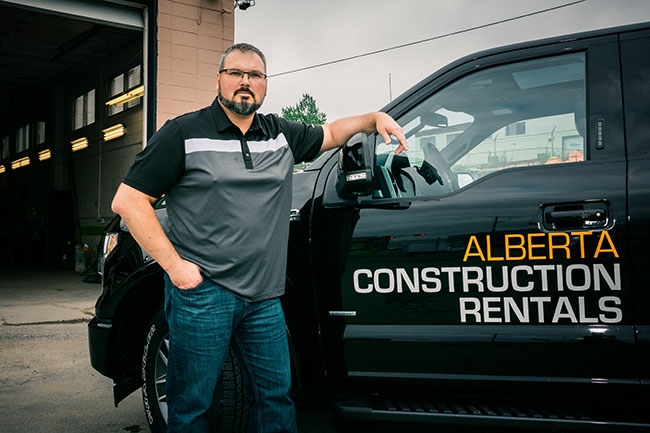 “I was a trucker and dispatcher for the party rental business with four days on, four days off,” he recalls. “Then, I left it all and went into sales…but I got drawn back into construction rentals later on, and later ran an independent rentals shop for almost nine years.”

More than a decade later, Carriere is now president of Alberta Construction Rentals (which he opened in January, 2015), as well as president of the Alberta chapter of the Canadian Rental Association. And he’s loving every minute of it.

“This industry kind of traps you, but in a good way,” he explains. “For the most part, if you do rentals right and run your business efficiently, it’s profitable and you can make a good living out of it. No two days are alike. There is no redundancy because things are changing every day, like new equipment, new issues or new challenges. It really keeps the heart pumping.”

Establishing a new business
Three years ago, Carriere decided to start up his own construction rental company. He partnered with a local residential developer who also happened to be looking to do the same thing.

“I already had a business proposal put together and here he was,” Carriere explains. “It was like ‘You’re looking for me just as I was looking for you.’ It turned out to be a really neat coincidence.”

From there, Alberta Construction Rentals (ACR) was formed. Headquartered in Calgary, the company started off supporting Carriere’s partner’s project. “It was a great customer to start with because it was a very strong account. We were supplying heat and lights to a large residential tower being built in downtown Calgary and we’ve been growing ever since.”

The creation of ACR occurred at the beginning of the provincial economic downturn, this one coming on the heels of the 2008-09 recession.

“Starting the company at the start of the downturn was a double-edged sword,” says Carriere. “We were really, really cautious at the time. We didn’t over-purchase inventory, and we made and still continue to make sure that what we buy is going out. We had projected some pretty good numbers but haven’t met any of our initial budgetary forecasts.”

Despite this, adds Carriere, “We’ve been able to acquire some customers from my history who are really strong and loyal, and I’ve got a great team that hasn’t had to stress as much as other people with regards to their security in their workplace.”

“Basically, we bring in temporary power so construction workers can run things like fans and lights as they’re getting their work done,” he says. “We’ll even put a diesel generator in front of a site so workers can use their tools with help from it. And we can also help heat up a building in the colder winter months.”

While many rental companies provide heat and power support, one major differentiator of ACR is that it also does its own refuelling. “All rental companies have pretty much the same equipment, but this is the one thing that makes us stand out,” Carriere explains.

ACR has a wide range of equipment to support heat and power including small electric space heaters all the way up to units producing 2 million BTUs. The generator fleet starts from 3,000 watts and runs up to 235 kilowatts. Pumps and dehumidifiers are also a big part of the business.

While Carriere refers to heat and power as ACR’s “meat and potatoes,” the company also rents out equipment including Bobcats and mini Bobcats, as well as lawn and garden supplies such as rotor tillers, aerators, power rakes, augers and jackhammers.

“That’s my favourite thing to rent out: the lawn and garden stuff,” says Carriere. “You get to talk to homeowners about their projects and you get to see what they’re really excited about. That’s the fun part for me. They may not quite know what they want and our team can assist and troubleshoot with them to give them what they need. And customers are always pretty appreciative of that.”

Customer service philosophy
When it comes to customer service, ACR abides by two unofficial mottos. First, they are committed to supporting other rental companies in the area. “Even though many of us are competitors, we also have a friendship with many other rental companies,” says Carriere. “We compete like cats and dogs for projects, but if someone is awarded a site or project and they don’t have all the equipment they need, we will rent to and from each other at a competitive price. Even the national companies rent to us independents and independents rent to other independents. Basically, we all support each other.”

Secondly, ACR strives to stand out to customers by being a little bit different. “In this industry, providing good customer service is all about the little things — the intangibles —and trying to be the best at them,” Carriere says. “For example, we always strive to go above and beyond to ensure our invoicing is on time and accurate and that we achieve our delivery times with products that work. We also have appreciation events for customers, to make them aware of how much we value their business.”

Ultimately, says Carriere, a lot of it comes down to his employees. “The business couldn’t be what it is without the team we have here. I can’t say enough about how good of a culture it is. There’s a lot of laughs. It’s like a little family. Culturally, it’s a great atmosphere and that translates into the customer service experience.”

Thoughts on the industry
In addition to being president of ACR, Carriere is also president of the Canadian Rental Association’s Alberta chapter.

“I just took on the role earlier this year, so I have another two years on my term, but it’s been a great experience so far,” he says. Already, he’s travelled to many cities across the province, introducing himself to others in the rental industry and working to create energy and interest in the association.

Carriere sees many benefits in holding the volunteer position. “Being the president of an association like this builds you some credibility in the industry,” he says. “People will listen. And they want to talk to you about issues they have in the rental industry and suggest ways to do things differently. I love all the communication involved in this role. I’ve volunteered for other different committees and boards of directors and I really enjoy being right in the heart of things.”

Opening in Fort McMurray
Just this summer, ACR opened up a second location in Fort McMurray. Only a bit more than one year ago, the community of “Fort Mac” was ravaged by wildfires, forcing more than 88,000 people from their homes and destroying approximately 2,400 homes and buildings. According to Wikipedia, the fire spread across more than 1.5 million acres before it was declared under control in early July, 2016.

“We chose to open up a location in Fort McMurray for a couple of reasons,” says Carriere. “Right now, the city has a very large need for rebuilding in regards to the residential areas, and that’s what we specialize in. They’re going to have some nice growth in the upcoming years, and we want to participate in that. Plus, the properties have become a bit more affordable at the moment and so has equipment, mainly because of the economic downturn the province has been experiencing.”

Opening up in Fort McMurray was not part of ACR’s original plan. “We weren’t going to look at expansion until we’d been in business for about five years,” says Carriere. “However, it just seemed like the right time to do it. And opening up there hasn’t really been difficult because there are many people looking for work with equipment to be had and lots of work to get done.”

At the moment, the new location has two employees on site and is geared primarily toward a customer base that includes homeowners and homebuilders.

Future plans
As for the future, ACR is in the process of becoming core-safety certified. Carriere says he is also looking at more opportunities for expansion.

“We named this business Alberta Construction Rentals for a reason. We never expected to be restricted to just one part of the province. And we’ve got some great partnerships with some companies that allow us to have equipment throughout the province. So keep your eyes out for us because we plan to keep growing.”