The Art of (Rental) War 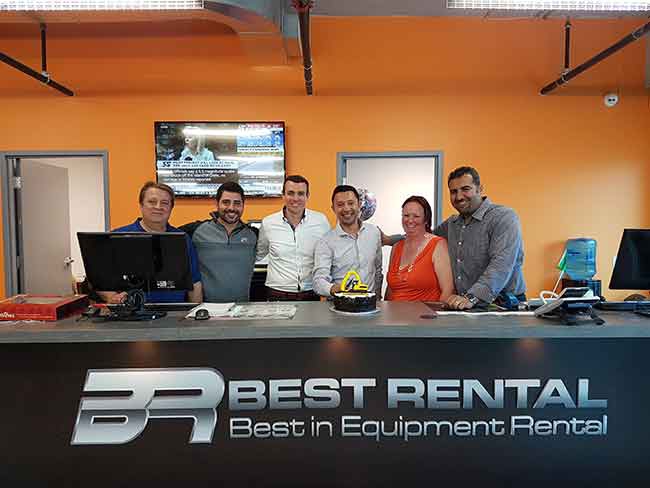 Best Rentals has put a lot of work and thought into its presentation to the customer. Standing at the brand new counter are Tony Iaccino It’s hard-nosed military training and mission-focused tactics that John Abraham brings to his start-up rental operation.

“For one thing, officer training in the Canadian military gives one a breadth of mental discipline, management and leadership capabilities,” says Abraham as we tour his new 14,000-square-foot showroom and warehouse in Maple, Ont., in northwest Toronto. “It’s a big plus in this industry.”

A native of Cairo, Egypt, Abraham’s family came to Canada in 1986 for “a better life and a better education,” he says with pride. He worked for the Department of National Defense for seven years after graduating from the University of Toronto in 1996 with a degree in psychology. “My studies taught me to understand people, their motivations, and applying the crucial one-on-one, personal touch. Everyone is different, everyone wants to be treated as an individual, that their particular needs can be met. These embody the fundamental principles of rental service as I see it and practice it.”

Prior to founding Best Rental last November (the company’s official launch in late May drew local dignitaries and seven brand-name suppliers), Abraham soldiered as a star trooper for 17 years with Stephenson’s Rental (a six-decade-long success story in rental service) based in Toronto. “If you want to do it right in the challenging rental business, it pays to associate yourself with the best,” he opines. “It was with Stephenson’s that I learned the importance of integrity, respect for the customer and leading by example. They provide their people with good grounding for understanding the intricacies of this business.”

Abraham is amassing his arsenal to meet the multifaceted shopping list of his clientele, most of which are the big wheels of the Toronto construction sector. Best Rental’s location is a newly built industrial district within the city of Vaughan, geographically encompassing the amalgamated towns of Maple, Woodbridge, Concord, and Kleinburg. It was a strategic choice: a hub of big wheel construction companies, including concrete sidewalk specialist, Curbside Construction, roadwork professionals Tectonic Infrastructure, and the giant Ashland Paving and Construction.

Best Rental carries a range of scaffolding, hoists, ladders and pullers, air compressors, aerial equipment (Lift Man, Lift Scissor and Lift Boom), as well as a veritable battalion of heaters, notably one of the largest in-house selections in the city. “That pleased many of our contractor clients over the winter months,” notes Abraham, who adds that his goal is to cover the full needs of the construction industry from small power to big power, small compaction to big compaction. “We have two expert mechanics on staff, tasked to service and repair our customer’s equipment. I’m fortunate to have some of the best people in the business surrounding me.” That includes a number of private investors who are excited by the can-do attitude of this new kid on the block, including Abraham’s business partner, David Allegranza, the president of Prostar Excavating and Grading, a family-run excavation service firm providing earthwork, grading, and site preparation. Prostar is also a co-tenant of the building that also houses Best Rental.

The general public will be a big part of the Best Rental action plan as it expands its foothold across the community. For the residential customer and devoted DIYers, the company carries True Temper’s line of rakes, digging shovels, scoops and spades, in addition to saw chains, gas log splitters, gas weed eaters, two-sided hedge trimmers, and Erie brand wheelbarrows.

Asked why he decided to strike out on his own – and why now – Abraham says the time was right for him to make the move. “I was eager to develop as an individual and achieve a sense of control over the outcome of my work, and to be the best I could be, to do the best I could for my customers and clients. Where there is no risk, there can be no reward. And of course, there are many rewards of retailing — the best of which is the feeling of satisfaction of a job well done and earning the trust of a customer.”

At 42, and at the top of his game, Abraham believes his military experience will stand him in good stead as he rallies his forces to ready Best Rental for the battles ahead. “There’s a big difference between being a boss and being a leader,” he nods. “Leaders are hard to find. The main difference between bosses and leaders is how they view themselves in relation to their team — they either lead the team or they’re part of it. Being part of the team is part of being the leader, and I feel it’s an area where veterans can really shine.” It’s known that those in the military have some of the most stressful jobs one can have. They tend to be able to keep their heads when dealing with high-pressure situations, like negotiations with suppliers and customers. “Keeping your cool is vital in touchy situations, since it can help you get the edge,” says Abraham.

Then there is the dedication, discipline and adaptability of the luminaries who have most inspired Abraham to carve his out his own entrepreneurial path. He cites Steve Jobs as number one. “I admire his creativity, star quality and astonishing ideas about the future, a renowned innovator who used his strong vision and will-power to create a successful company.” Another extraordinary icon, who is also a fellow military man, Carl Buchan, Lowe’s Hardware founder and a World War II veteran under whose helm he transformed a small hardware store in 1946 in North Wilkesboro, N.C., into an international Fortune 50 company. Abraham marvels at their accomplishments and whose business savvy he’s determined to mirror.

Though a young company, Best Rental is relentlessly working to outflank the competition in a number of theatres of operation. First and foremost, by inking alliances with major construction clients in the north and central parts of the Greater Toronto Area. According to Abraham, his plan of attack over the next five years is to parachute into Toronto’s eastern and western industrial perimeters by opening new stores and capturing the construction markets in those growing, suburban regions. “We can do it because we have the trucks, logistics expertise, and the marketing, team spirit, and product know-how to make it happen,” he affirms.

To reinforce Best Rental’s message, Abraham is aggressively marketing his products and services far and wide through his interactive website (bestrental.ca) listing the company’s products and services, prices, quotations, equipment availability, and invoicing. “We will also create a presence on Google, and our sales force is out there every day pounding the pavement, knocking on doors, getting up close telling our story and giving personalized service to customers one by one,” says Abraham. Best Rental will also have a booth at the next Canadian Rental Mart show at the Toronto Congress Centre. “The show is great for providing exhibitors and attendees with a terrific opportunity to shop, learn and build relationships,” he says.

In a salute to the book called The Art of War, an ancient Chinese military treatise giving tips on how to outsmart one’s opponent, Abraham believes the key to success is to play to your strengths. “Be prepared for things that could go wrong,” he advises. “We may shut our doors at six, but that’s not when we are closed for business. Customers can reach us 24/7 by phone. We know how to sell, but we’re also there for our customers when they need us. Because the bottom line of this business depends on how well our people help people.”