In the late 1980s, André Blais was at a career crossroads. However, as you might have already guessed, he decided to go into the rental industry. His careful planning and skilled management has led to the strong ongoing success of this independent business, which is now being guarded and guided by his daughter, Chantal. 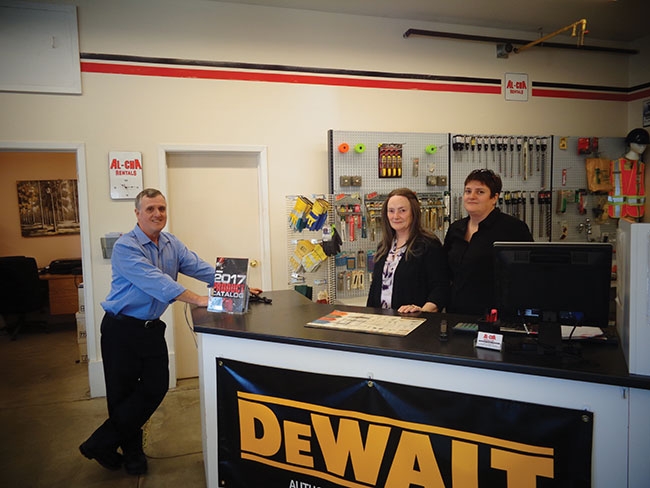 The Blais family has been drawn into rental from all different directions: André from mining In the late 1980s

“The decision to get into rentals started with a desire for a change in lifestyle,” André explains. “After 15 years of working for the mining industry in various regions of Canada, my wife, Catherine, and I decided to settle down and raise our family in a farming community near Pembroke, [Ont.] Catherine had already been taking temporary nursing assignments in Pembroke and had no difficulty in finding work, but I needed to find a new career.”

André’s uncle, the late Merrill Blais, introduced him to the rental industry, having been the successful owner of Sturgeon Rent-All Sell-All in Sturgeon Falls, Ont., for many years. “This type of business was appealing to me and I felt it was something I’d be good at,” André explains. “I already had experience in sales, managing employees and planning tool and equipment maintenance, as well as preparing and controlling operating budgets.”

Merrill suggested that, because of his lack of experience in small business, André should consider buying into a franchise rather than starting an independent business. He agreed that would be for the best and went with Joe Rent-All until 2003 (more on that later).

At the time of start-up, André faced three main challenges: obtaining financing, finding an affordable building in a suitable location and finding the right employees. Financing was hard to come by, says André, “mostly because I was unknown to the local banks and because I had no real experience in small business. I presented my case to a half a dozen lending institutions before finding someone who would entertain my business plan.”

In terms of the right location, André spent months researching in order to get it right. He studied traffic patterns, mapped out potential customers, viewed buildings for rent and looked at land for purchase as well. The ideal location appeared to be along the main corridor between Pembroke and Petawawa, Ont., (Petawawa is the site of an historic Canadian Army base, now called Garrison Petawawa, and its population has grown to rival Pembroke’s in recent years). In addition, this area was distant from the only other competitor in the area, a Rentalex outlet at the other end of town.

“The cost of renting any of the few available commercial rental spaces along this corridor seemed way out of line,” André recalls. “By this time, we were already mid-way through the rental season and we still had no building or equipment. We made the decision to construct our own building and start up early in the spring. I was fortunate in that my father, Clarence, was retired, had some building experience and was willing to give me a hand.”

A new challenge came when the time came to hire staff. André needed employees who were trustworthy, good with the public, could operate and repair all sorts of tools and equipment, make deliveries and so on, while having the qualities needed to help lead other future employees. With that tall order in hand, he inquired with the local federal government job office but didn’t have much luck. One day, a man came by with his resume and André hired him. He stayed 10 years. “From there, it was word-of-mouth, with people who needed work hearing we were hiring and approaching us,” says André. “We’ve also used various local employment programs over the years, notably Job Connect through Algonquin College.”

After all André’s careful planning, it’s no surprise that when he opened in May of 1990, the business took off. It grew so quickly that within two years, André increased the original 1,600-square-foot building by another 1,600 square feet. And more expansion was to come.

1997 – a big year
In 1997, André opened a satellite location in Petawawa. However, two years later, due to a few different reasons, he closed it. In the meantime, the Rentalex across town went out of business, so André purchased its inventory and leased the location as another satellite of his Joe Rent-All for about two years. Due to rental costs, André closed it and decided to add another 3,000 square feet to the original location. The space mostly went to new office space and for displaying and stocking party rental items.

Returning for a moment to 1997, it was also that year when Catherine introduced a party goods division into the company. “It was very successful for quite a few years,” notes Chantal. “Now that Mom wants to retire, the plan is to sell our party goods as I don’t have a strong interest in that aspect of the company. I would rather use the space to expand our small engine repair activities.”

Chantal had been involved with the business since she was 11 or 12, helping count inventory and “pushing a broom.” In 2003, however, after graduating from a business program, she moved to North Bay. That year, André decided to exit the Joe Rent-All franchise and go independent, mostly because the franchise fees heavily outweighed the benefits his business was receiving from them. André opened his independent, using the name Al-Cha Rentals, which is the legal name he operated under while being franchised and derived from a shortened version of his children’s names, Albert and Chantal.

The Blais family has been drawn into rental from all different directions: André from mining

For her part, Chantal had had a few different jobs in North Bay and, after about a decade, she was doing logistics and procurement in the aviation field, a position she really enjoyed. “Then in 2012, Dad decided that he wanted to retire and he asked me if I wanted to take over,” she explains. “It was not an easy decision. I took two months to hash it over. I loved my job, and it would be really hard to leave my friends. But in the end, I wanted to make sure my Dad’s legacy carried on.”

Upon arrival in the spring of 2013, she started re-learning the computer system and began doing some of her father’s tasks. André and Chantal worked side by side for approximately eight months before he completely let go of the reins. Chantal managed the company for a few years before finalizing the purchase in February, 2016. “It’s always a risk to buy a business, no matter what industry you’re in, but I had a good staff and a good support system. If you have that, you’re well on your way,” Chantal says. “I have always been careful to appreciate that some of the employees have been here for many years and that their experience should be respected. And I still call my Dad for business advice and for help maintaining the building and he’ll come in if I’m in a pinch. My brother, Al, is an IT specialist who lives in Toronto, and he manages our website. He is always there to provide remote IT support for the computer system.”

Current outlook
In terms of profitable opportunities, Chantal is keen to expand rentals and to also grow what her father had started back in 2010: selling parts and doing repairs for various tools and pieces of equipment. “One of our longstanding employees, Terry Raymond, – he’s been with us 26 years – has been spearheading this ever since,” she says. “It grew fairly quickly for the first couple of years and then, in 2015, more manufacturers approached us to take on their warranty repairs. Our main mechanic, Rob Brisson, is currently doing the majority of the repairs on customer equipment. We have another employee (Liam Whitelock) who has just finished his second year in the small engines course and is eager to finish his apprenticeship. Our newest employee, Mike Donnelly, will also be going though the apprenticeship program to help him grow within the company. We’re a certified warranty center for Toro, Honda, Dewalt, Milwaukee and many more.”

Things are looking very positive for Al-Cha Rentals, especially because Chantal has learned much from her father’s success. “He’s shown me how to deal with some of the more difficult situations and iron things out smoothly rather than burning bridges,” she says. “Taking over the business was a good choice for me.”