October 31, 2016 - Sno-Way International has announced the introduction of a new controller for their poly v-box spreaders. 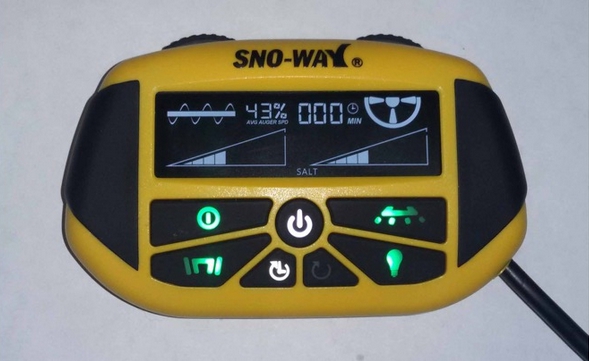 This innovative new controller allows for independent control of the auger and the spinner for greater precision in spreading the salt, sand, or whatever you would like to load your spreader with.

There are also push-button controls for the vibrator option as well as the optional light.  If you like a wetting system to combine with your spreader for greater ice fighting options, there is also a push button to engage the wetting system as well.  It is a plug and play controller, just plug it into any PDE spreader you buy from Sno-Way and the controller is ready to use.  Even better, the heavy wiring remains on the spreader, there is only a thin wire that connects the controller to the spreader for easier installation into the cab (only a 3/8” hole!).

Same Speed, No Matter the Load.
A benefit of the new control system is that it sets the speed of the auger and spinner, not the power to the motors.  In other words, if the auger gets hit with a large chunk, then the auger does not slow down (like a power regulated motor would), but power is increased to maintain the speed of the auger.  This means if your flow of material remains constant, no matter how easily or hard the motor is working to chew through what is in your hopper.

Terry Wendorff, the president of Sno-Way International put it like this, “I compare it to the cruise control system on your truck when you go up a hill your truck will automatically down shift and accelerate until you are back up to your set speed, once you go down the hill it will automatically up shift and decelerate until you are back to your speed setting.

Run/Pause Button Makes Life Easier
What would a control be without a pause button?  If you want to keep the same settings while you turn around or if you have to cross a spot you have covered to get to the next untreated area, you just hit the pause button.  Then, hitting the “run” button, you start up with the exact same settings you had before.

Other features on the control are a back lit LCD screen and a timer that keeps track of your auger speed to estimate material usage.  This new control really brings Sno-Way forward in bringing you a spreader that saves time and money by giving you a consistent application without any monkeying around while you are on site.

The controller goes well with Sno-Way’s line of PDE spreaders which they have engineered to spread just about anything (I mean anything, dry or WET!, like salt, sand, pea gravel…okay maybe not concrete).

You can learn more about what Sno-Way is up to at www.snoway.com.