There’s almost nothing guaranteed to quicken the pulse of Daniel Spencer like boating on his beloved Bayliner with his wife, Heidi, a first aid training partner with the Canadian Red Cross. 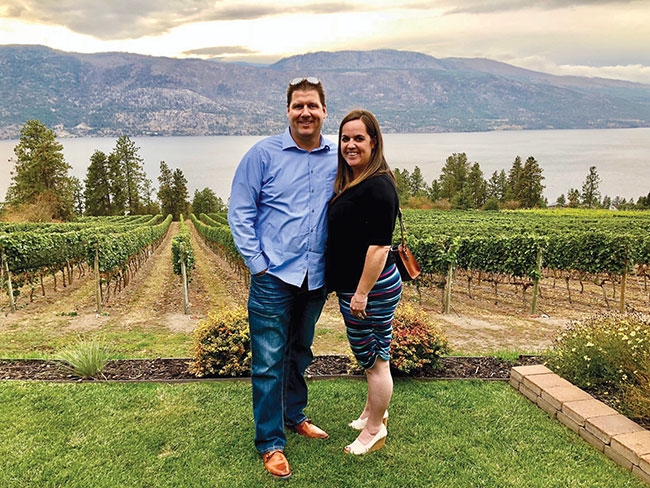 They love motoring in their sleek 20-foot-long craft out on scenic St. George’s Bay in search of fish ready to bite. “We are blessed here with so many beautiful beaches and some of the world’s best brown trout and striped bass fishing,” says Spencer, 44, the outgoing national vice-president of the Canadian Rental Association, and former branch manager of Hewitt Rentals (now the Cat Rental Store) in Antigonish, N.S. “A day on the bay makes life’s worries go away,” he chuckles. That’s why he can’t wait to get out there and skipper his boat on every seaworthy day.

He will need to ready himself for the coming swells of his leadership as he prepares to helm the CRA as its new president. “We’ll be busy over the coming year, there’s a lot of work to do,” he says. It’s a heady agenda that Spencer and his CRA team are planning to execute over 2019. “We intend to build on the momentum of the past in advancing a variety of top-notch initiatives and programs,” he enthuses.

In the area of government affairs, Spencer is looking to model what the American Rental Association is doing to raise the awareness level among politicians on the big issues of laws and regulations that most impact the rental service sector. “We want to bring a similar government relations program to Canada,” he says. “This will give our members a voice in regards to decisions affecting them made by government.” It would resemble the ARA’s political action committee in continually advocating and lobbying government policy makers for the continued growth and success of the rental industry. “We are leveraging the knowledge and experience at the ARA for guidance in lobbying lawmakers, but our approach will be a Canadian one,” he insists. The CRA has done the groundwork to make this happen and, as Spencer points out, he’s enthusiastically looking forward to 2019 as the organization begins to roll out a made-in-Canada government relations program. “I’m committed to spearheading this initiative,” he affirms, adding that he welcomes the opportunity to speak with members at regional tradeshows to consult, to network and to help define the goals of the program as it evolves. “It’s really going to be a grassroots effort and I’m delighted to receive feedback and suggestions from members across the country on the issues that are closest to them.”

Near and dear to Spencer’s own heart is the idea of outreach, particularly to youth, the leaders of the rental industry of the future. He’s making it one of his top priorities to trumpet the CRA message to them, to introduce rental as a rewarding career option to students at the high school, community college or trade school level. “We will be focusing on how to best proceed with this program early in 2019, and working on increasing our brand recognition,” he says.

In tandem with dynamic outreach, Spencer sees the ARA/CRA’s Young Professionals Network as the cornerstone to attracting the best and the brightest young talent around. He observes what The ARA is doing to target youth, including offering invitations to exclusive YPN annual events (such as the YPN networking reception at the ARA Show and the Young Professionals Conference); monthly communications with professional development resources; YPN-only news; and other information to build careers. Spencer likes it. “They [the ARA] already do a fantastic job getting young professionals under 40 out to their conferences and encouraging participation in the association. We need to ensure that the younger generation in Canada is as engaged and continues to bring new ideas and new technology to the industry and association. I would love to see a Canadian YPN in the future.” He’s hoping to make it a reality over time, emulating the ARA model. “We intend to make it a prime objective to help young people learn about the industry, to advance their careers and establish relationships that will not only help them grow personally and professionally but also ensure a vibrant industry for future generations.”

Touting the importance of membership benefits and shared interest groups, Spencer points to three recently introduced new SIGs to represent association members better. These include: safety, membership and party and event. These SIGs, he emphasizes, will be chaired by national board members who are actively engaged in the enhancement of specialized phases of the rental industry. In this, he sees education and training as the keys to an efficient, profitable and safe operation.

Continuing education is important to the CRA to deliver on a vision to help maintain qualified employees and increase the professionalism of members. Spencer is confident that members will continue to rely on the national head office as the go-to source for information, tools and resources to share information on events, publications, best practices, and industry developments.

Making good on promises with a warm, personal touch are qualities Spencer brings to the Canadian Rental Association board. It may stem from his Atlantic Canada upbringing.

Born and raised in Dartmouth, N.S., Spencer has spent most of his working life in Antigonish, two hours eastward. It’s a small university town, home to St. Francis Xavier University and its famous X-ring that, after Super Bowl and papal rings, is arguably one of the world’s most recognizable rings. After a 15-year career in various leadership positions with Purolator Courier, Spencer completed his heavy equipment operator certification in the fall of 2007. His plan was to head out west and work the oil sands. But his career path took an entirely unforeseen tack when he stopped in one day at Atlantic Tractors and Equipment (a Caterpillar dealer at the time) in Dartmouth to see if there might be work available. There wasn’t, but they did suggest he try the Cat Rental Store, which was part of the Hewitt group.

“As luck would have it, the Cat Rental Store was looking for a rental advisor on the front counter,” Spencer recalls. “It wasn’t quite the position I was looking for as I wouldn’t get me much seat time in the gear, but having access to the equipment certainly couldn’t hurt.” He was offered the position and, though he knew very little about the rental business, he accepted without hesitation. “I enjoyed it,” he smiles at the recollection. “I was all about learning the business, excited to come to work every day, continuing to learn more and more about the rental industry.”

In 2009, he was asked by his regional manager if he was interested in a management role, to which he answered “absolutely yes.” He was asked to help start up and run one of the new Cat Rental Stores located in Antigonish. Shortly after making the move to Antigonish another opportunity presented itself. Every February, the company’s regional group of mangers gather together at the CRA Atlantic Trade Show to do their spring small tool purchases for the upcoming season. At one show, Spencer was approached by Hank McInnis, who was at the time the CRA local vice-president (today he’s the CRA chairperson). “Hank asked if I’d be willing to volunteer some of my time to help out the local board and of course I agreed,” Spencer remembers. He would spend the next few years volunteering on the Atlantic board, ascending through the organization’s chairs from vice-president to president and ultimately moving to Atlantic director representing the Atlantic region on the national board. During this time, he also took every opportunity to network and attend the top North American rental trade events and ARA Leadership Conferences. In 2017, he was asked by the executive to join them as incoming national vice-president and, in February 2018 at the ARA Rental Show, he accepted. “That gave me the opportunity to help lead our national board,” he says. He currently also sits on the CRA’s Investment Policy Committee, Policy and Procedures Committee, Insurance Oversight Committee and Strategic Planning Committee. Being tapped as the association’s new president was just a natural progression, he believes. “I’m always looking for new things to challenge me. I like to take risks, jump right into the fray and give it all I can.” That can-do philosophy will stand him in good stead as president.

He predicts the waters may be choppy over the next 12 months, but he knows there’s a good team in place on the national board and also at the national office in Stoney Creek, Ont. “And I’m optimistic we can accomplish much together,” he predicts. The CRA ship of state is steaming full steam ahead.