He hasn’t been in the rental industry as long as some “old-timers,” but Mike Maltby has had his hands in the Canadian Rental Association for more than a decade. Starting in early 2018, the 35-year-old will take on a one-year term to become the next president of the association. 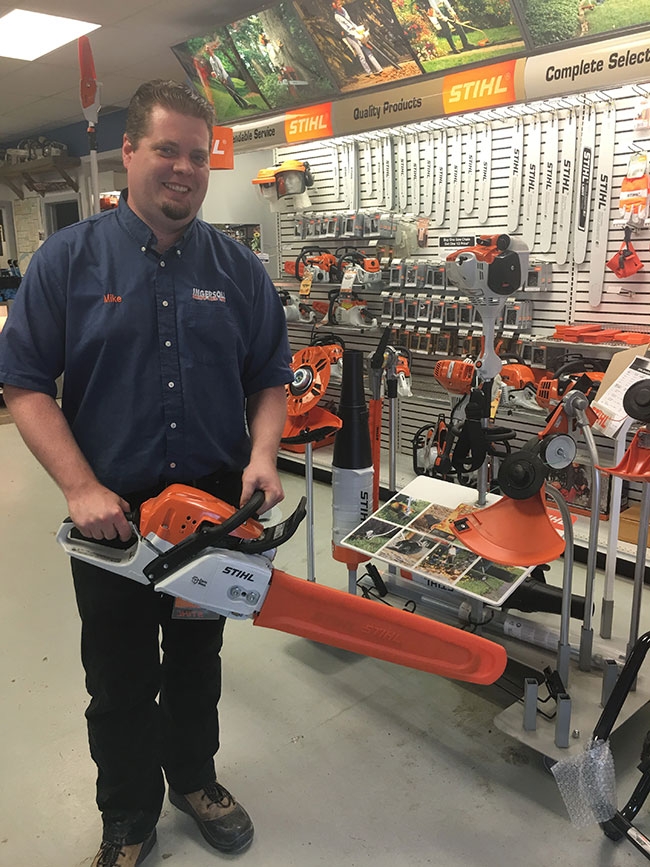 He’s certainly come a long way from early days, when he was determined not to join his father’s business, Ingersoll Rent-All.

Growing up, Maltby was adamant as a high school student that his part-time job at Ingersoll Rent-All would never turn into a career. But after going out on his own and selling insurance and investments for a couple of years, Maltby had a change of heart.

“When you’re 19 and trying to deal with people’s money…well, that probably wasn’t the smartest choice I could have made,” he says. “After getting some real-world experience doing that I realized, ‘Hey, maybe working for dad isn’t such a bad idea.’ Over time, I kind of developed an appreciation for the rental industry and getting to know the customers and suppliers and employees—and so far, it’s been a great ride.”

Maltby has now been working with his father, Don, full-time since 2000. It wasn’t always an easy road, of course.

“I got lots of on-the-job training and it was a steep learning curve,” he says. “The equipment side of things isn’t my strongest side. I’m definitely more in my element on the business and numbers side of things. And you kind of get thrown to the wolves here; you either adapt or you don’t. But it’s worth it when a customer walks in the door with a problem they think can’t be solved, and you can solve it for them and make them happy.”

A growing involvement
Albeit a bit reluctantly, Maltby first joined the Canadian Rental Association board at the Ontario level about 11 years ago, when he was just 24.

“My dad pushed me into that,” he recalls. “They were looking for someone to stick their hand up and volunteer. I was naive enough to say yes, but I’ve been volunteering ever since.”

And clearly enjoying it. By far the youngest in the group, Maltby has done everything from acting as newsletter editor to website host, to meeting coordinator. In his early days as a volunteer, he also did some trade show planning.

“I just kept saying yes when I was asked to do something,” he says.

He was eventually asked to sit on the national board as Ontario director, representing one of the strongest of the seven regional chapters of the association across Canada. Then, last year, Maltby was invited to sit on the executive committee.

“The association has gone through a lot of changes over the years and the biggest thing I’m trying to do is get all the chapters on the same page so we’re all doing the same thing,” he says. “The team has implemented better CRM [customer relationship management] technology and we’re trying to run board meetings more effectively to make the most of the short time we have together. We’re also focused on providing better support from head office, and providing support to regulatory and government agencies as we develop more relationships nationally.”

Maltby also wants members to be more aware of the benefits of membership in the Canadian Rental Association. He points to perks like professional driver training, an insurance program and legal aid.

That said, Maltby believes the greatest benefit of membership is all the networking opportunities, particularly as a volunteer.

“Looking at it, from my perspective, as a small-town rental company from a town of 13,000, it’s amazing the contacts you can make through the association,” he says. “You’re sitting on the board with people at much higher operating levels and with so many different experiences, sharing the same room with managers of national corporations and getting their insight. You get to meet the movers and shakers of the industry. It’s really all about the relationships and putting a name and face to people who are personally invested in the industry. It’s definitely helped our business directly.”

Personal and professional growth
Maltby agrees he has come a long way since he first joined the association more than a decade ago.

“I wouldn’t say I was necessarily shy before I joined, but I would never have dreamed of getting up at a podium and talking to a whole group of people,” he says. “That seems to be a regular part of my job now.”

Among other public speaking topics, Maltby has led panels on store security, communicated with membership about what’s going on at the board level and passed on information about products and services within the association.

“When you get involved with the Canadian Rental Association and you’re always having to present to other people, you definitely get pulled out of your shell a lot,” he says, adding, “especially during the dreaded Q-and-A period!”

“They start in the industry as a part-time job while in high school and then you see them moving up from washing skid steers to working the counter, then taking on sales and eventually management,” he says.

However, “People don’t normally think about going into rentals when they’re considering careers growing up,” Maltby adds. “It just doesn’t get a lot of attention from job seekers. The thing is that the rental industry is diverse enough that almost anybody could find something here to do. But it’s all about getting in the door in the first place.”

As such, Maltby has been speaking out more lately about how to attract younger people into the industry and how to recruit and retain members.

Recently, he attended an American Rental Association meeting, where members were brainstorming about how to attract younger people into the association and – more specifically – their shows.

“I was in a room of about 50 people and I was the only one in our Young Professionals Network,” he recalls. “Everyone was saying ‘How are we going to attract young people?’ and I put up my hand and said “Have you thought of asking them what they want?’”

“I think when it comes to the rental industry in the U.S. as well as Canada, the older generation is really looking for leadership from their associations in a top-down, tell-us-what-we-should-be-doing way. However, younger people want to be able to provide their feedback, so they have a more active role in the way the association is run.”

One observation he has made that differentiates the “older” and “younger” generations is regarding networking.

“Previously, the big draw of association events was just getting into a room and talking to people, getting to know your peers face-to-face,” Maltby says. “But I think the trend in the industry is moving more toward an interest in educational and training opportunities, and career advancement in those areas. With this shift, we need to have more of a focus for an event, more of a reason for them to be there outside of networking. The networking can happen online before and after the event. It’s a new era in the rental industry and the focus is now on wanting to learn something rather than on traditional networking where good conversation is the bulk of the event.”

As president, Maltby plans to improve how the association communicates with its members, not just regarding the chosen media but in how it frames its messaging.

“If we’re going to recruit and retain more people – especially younger members – we need to change how we communicate with them,” he says. “That means getting online more and polling and connecting directly with members through events like webinars. Mainly, it’s about starting with asking the younger people what they want from the association. What I’ve seen is that my generation and the ones coming up next are definitely not shy about telling you straight out what they want. But first, they have to be asked.”

Creating a legacy
So, at age 35, is Maltby the youngest president ever in Canadian Rental Association history?

“I don’t know for sure but my gut feeling is yes, by a long shot,” he says. “We’ve been trying to track down people with really good historical knowledge of the association but at least within the last 25 years, I’ve been the youngest. Hopefully I’ll be joined by others.”