The best tips on trailers built for oilfield and pipeline work. 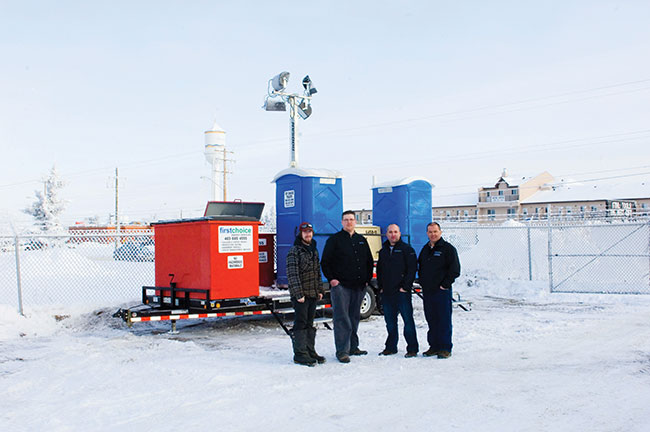 Customized trailers are ideal for a variety of applications for work in a remote location. This is particularly true for oilfield and pipeline work.

While working with First Choice in Alberta, Adam Snook spent several years building customized combo-trailers for oilfield and pipeline applications and says there are some key items that these trailers often need including light towers, 1,000-litre fuel tanks, portable toilets and a heater, to name a few.

“Sometimes we had electric pumps mounted to them for pipeline jobs,” Snook says. “There were a lot of different configurations.”

As a rental house, he says the most important thing to do first is determine what market you’re going to pursue.

“I’ve seen them as simple as a portable toilet with a small garbage bin mounted on it. Trailers can also get elaborate and have things like two heated toilets with a 60-kilowatt generator, a huge light tower mast on it, electrical pumps and a 1,000-litre [fuel] tank on it with remote fuel hoses for fuelling other equipment. Those are generally for oilfield use and remote-work use, if you have a jobsite a long way away and they want access to big fuel to be able to fuel everything up on site.”

Another option that some customers like to have on remote job sites for oilfield projects and other applications is a security trailer with a remote camera that sends feedback to a monitoring station to help prevent theft. Of course, this only makes sense for commercial sites that have enough valuable equipment on site to justify the cost of the trailer.

“If you’re on a site like that, you’re going to put a security trailer on. They’re generally built with a light tower, and you could mount them on a flat-deck trailer with a generator and a portable toilet – something that’s going to give you an edge over a guy just delivering a stand-alone toilet,” says Snook.

Although a flat deck trailer is a solid option, rental houses don’t have to be that elaborate or expensive.

“There are a couple companies that I’ve seen that have just taken a light tower and they’ve extended the frame of the trailer and they added a spot where they can put a three-inch submersible pump and another spot where you can lay the discharge hose on it for pipeline jobs – you’re always having to pump out the trench,” Snook says. “You’re just giving the customers the convenience of having everything in one package and not having to come and pick up the pump and throw it in a box in a truck, and you can charge a premium for that.”

Be prepared
Pipeline companies are notoriously picky when it comes to safety, so you must make sure you meet all the local OH&S standards before the trailer is brought on site, Snook notes.

“There’s no point putting a bunch of money into something that’s going to get kicked off the site right away,” he says.

If you’re going to be chasing those long-term jobs where your equipment is going to be out for six to eight months at a time, make sure you’re buying the right amount of equipment for the trailer.

“If you’re going to be putting generators and light towers on, make sure you get something with a bigger oil sump on the engine so you can extend your oil-change life, because oilfield companies and pipeline companies don’t do their own maintenance on their own equipment half the time…never mind worrying about taking care of your equipment,” Snook says.

He also recommends purchasing GPS tracking technologies for trailers, since thieves hooking up to a trailer and driving off is a common way theft can occur on a site.  “If you’re going to have $30,000 or more tied up into a trailer, spending $75 to monitor it is pretty reasonable,” Snook says.

He also recommends wheel locks, if possible, or simply removing the tires if a trailer is going to be on a site for a long duration of time.

When planning out a trailer for a long-term job like this, it’s important to configure it for accessibility.

“You have to configure so they can set it up in three minutes and walk away from it, so they’re not spending half an hour turning things or flipping ramps down to get at things,” Snook says. “They don’t have a great reputation for taking care of things but if you send it out looking good it’ll come back a little better. Plus, it makes it easier to charge for damages. If we were doing major oilfield jobs, we’d take before pictures and then take pictures when they came back and put them in a file so we had a leg to stand on when we charged for damages, because there will be damages.”

Another way to try and prevent damage is to invest in a quality trailer.

Pipeline work in Canada also takes place throughout the winter, so make sure everything that goes out is fully winterized.

While there are many things to consider when setting up a trailer for oilfield or pipeline work, the most important thing to remember is the value of the service you’re providing your client, Snook says.

“When you’re doing the customer a favour by having multiple pieces on one trailer, charge for it. Don’t give them a discount because they say they’re going to have it out there for a while. When you’re saving them money by having everything built into one, and they’re only having to go to one supplier, that should come at a premium,” Snook says.