Fifteen years ago, Dale Benner was driving home from his job as a road builder for the logging industry, when he noticed a rental business in his hometown of Sechelt, on B.C.’s Sunshine Coast. After Dale walked in the door at home, he had an announcement to make to his wife. 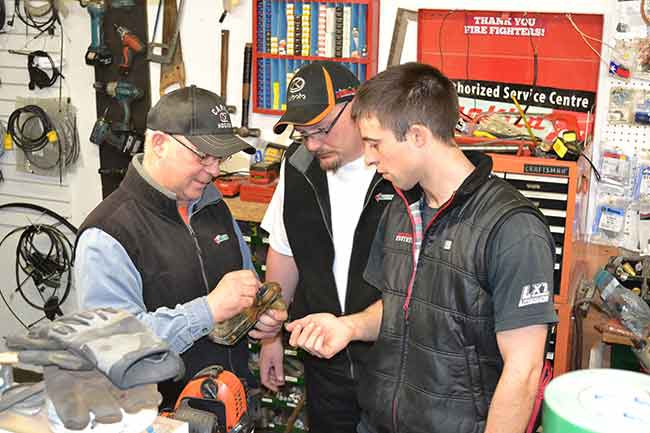 Dale Benner (left) handles the equipment side of the business. Consulting homeowners on DIY projects is a big part of his job in the small

“He told me, ‘I want to get into a business. Can you help me do that?’” recalls Sally.

Six months later, in September 2001, the Benners were owners of Rent It! Canada, a business Sally didn’t know existed in her logging/tourism community that’s home to about 9,500 residents and accessible via BC Ferries from West Vancouver.

In January, Rent It! Canada won Rental Store of the Year for B.C., an award from the B.C. Local of the Canadian Rental Association. Sally hadn’t realized they were nominated so winning was a big surprise. “I don’t know if we won because we’re friendly or because we pay our bills on time,” she says with a laugh.

The Benners bought Rent It! Canada from Joan Frembd and her late husband Fred, who started the business in 1989. The Frembds had come close to selling the business a few times but the interested buyers didn’t seem like the right fit. When the Benners came along, the Frembds became friends. After cutting a deal with the Benners, the Frembds continued to own the building, with the Benners renting the premises. As business, and stock, grew, the rented space began to get cramped, so 2 1/2 years ago, the Benners bought a much bigger commercial building, with easier access, in Sechelt. “It’s the same amount for our mortgage as it was for our rent,” Sally says.

More room became available for Rent It! Canada’s two arms of the business: equipment rentals and party rentals. With the larger premises, the Benners created a separate area for their party rental stock, which comprises about 15 percent of their business. “Party rentals are super fun,” says Sally.

Their party rental goods include plates, flatware, stemware, table decorations, serving dishes, tables, chairs and small tents. They’ve drawn the line at big tents though, because the big tops are too time-consuming to erect. Weddings, funerals and fundraising galas typically generate the customers. Fundraising usually swings into high gear in October, November and again in January and early spring, before the wedding season kicks in. But increasingly, the “I do’s” are being said well past summer, with last year’s wedding rentals continuing into September, Sally recalls. To keep customers’ engaged, Sally and employee Teresa Condie-Genovese create themed display tables based on holidays and the seasons.

Sometimes Sally has difficulty getting at everything she needs for the creative table settings. There’s a reason. Teresa is about six feet tall, while Sally is 5-feet, 2-inches. “Teresa will stack stuff high up and I can’t reach it,” Sally says with a laugh. Meanwhile, if Teresa is looking for just the right accent piece, she inevitably looks, low.

Dale figures they’ve invested at least $300,000 in stock and they’re always adding new items. Customers make requests and the Benners listen and then get advice. Not wanting his money to go down the drain, Dale will ask a plumber if it’s worth investing in the latest plumbing tool or any of the other suggestions he gets from customers. “I like to get a feel for things,” he says.

The juggernaut of YouTube and home improvement shows have led to a raft of people who try their hand at home fixit projects. Dale often has to contend with customers who ask for odd or new tools they’ve seen featured in ads, online or in videos. Usually, it’s not worth buying the piece of equipment that wouldn’t be frequently rented. Another aspect of the many do-it-yourselfers, is that Dale sometimes gets asked for advice for jobs such as sanding floors or cutting tile. “It try not to get into it,” he says. Giving advice is risky because the customer’s abilities and the material they’re working with are unknown, he says.

Related to the weekend warrior, fixit crowd or others who prefer to do their own work, is the cyclical aspect to the Benners’ business. “I’ve found that rentals are seasonal, especially for lawn and garden rentals,” Dale says. On a sunny spring day, garden equipment and power washers are being hauled out the door. When it’s a November downpour, pumps and anything that handles drainage problems, are on heavy rotation. “We’re weather dependent,” he says.

Dale, 57, knows a thing or two about wet weather, having grown up on the somewhat oddly named Sunshine Coast. About 30 years ago, when working in the logging industry, he almost lost his leg while doing his road-building job. Off work for 1 1/2 years, due to a serious compound fracture, through grit and determination he was able to return to his job and resume playing the many sports he still does like skiing, hockey and golf.

Sally, 54, grew up in Vancouver, where both her parents were pharmacists. As a teenager and young adult, she worked with them in their drug store, developing a fine set of customer service skills that sometimes get put to the test at Rent It! Canada. “When people get pissed off, I understand,” she says.

Because her parents had a summer cabin on the Sunshine Coast, Sally spent time there. During a break from university, while working in a local bar, Sally met Dale.

Married in 1986, the couple have three sons: Byron, 26, an accountant; Dagan, 24, a part-time paramedic, volunteer firefighter and part-time Rent It! Canada employee; and Graydon, 22, a construction worker.

Before Sally and Dale purchased Rent It! Canada, Sally had worked as a recreation co-ordinator in Sechelt, which dovetailed nicely with being the parents of three active sons who did a lot of sports. It’s why today, the business makes regular donations to causes related to children and sports, Sally says. Constantly asked to donate to various causes, Rent It! Canada had to focus on an area. Still, their business loans barbecues or other items to local groups who are fundraising.

Rent It! Canada is open Monday to Friday, 7:30 am to 5 pm, except Saturday when they open at 8 am. Thanks to their well-trained and able two full-time employees, Teresa and Justin, and son Dagan, Sally and Dale can occasionally get away. One of their latest breaks was five days of skiing at Big White ski hill, near Kelowna. In the summer, they kayak and paddle board. “We have really great staff, so we’re good to our staff. They have to step up while we’re way,” Sally says.

Dale Benner (left) handles the equipment side of the business. Consulting homeowners on DIY projects is a big part of his job in the small

Sally also dedicates time to her highly-popular bed and breakfast operation, Burchill’s B&B By The Sea, an attractive cottage on the family property, complete with saltwater swimming pool and ocean access.

One sad spot in Rent It! Canada’s history was the loss in 2015 of much-loved employee Marv Wallace. “We bought the store in 2001 and hired Marv four months later. He was with us almost 15 years,” Sally says. Wallace was a crackerjack mechanic and just a great guy. Only a few months after his diagnosis, Wallace, married with three children and two grandchildren, succumbed to lung cancer at the age of 64. “Grown men were crying in our store when they found out,” Sally recalls.

Because Sechelt is a relatively small, somewhat isolated small town, the Benners had difficulty finding a new mechanic, untiJustin walked through the door. Their recent search for a new, jack-of-all-trades employee has proven just as challenging. “We want someone who can do everything, They  can’t just be a mechanic. They have to take party rentals, be good at customer service,” Sally explains. Ideally, it would be a chameleon who knows a thing or two about hosting dinner parties and fixing a small motor.

Another aspect of living in a community reached by a ferry, with only one road in and out, is that it’s costly to bring in big, expensive pieces of equipment. If a customer wants to rent a huge excavator, it makes more sense for the Benners to sub-rent it, rather than buying one to rent. But, such requests are rare.  As well, goods take a little longer to arrive because of the ferry transport, Dale says.

But living in a community where the rustic beauty draws a lot of tourists, can bring a few light moments. “A lot of people think we rent cars,” Dale says. Something about Rent It! Canada’s exterior gives visitors the impression that a mid-size sedan is nearby. Alternatively, people who visit the local car rental business want to rent supplies for their outdoor wedding.

A big part of Rent It! Canada’s success is their willingness to accommodate their customers. “A gal, a couple of months ago, didn’t bring her stuff back on time. We told her to pay us when you can,” Sally recalls. “We try to work with all our customers,” Dale adds.

Since that day in 2001 when he announced he was ready for a new job, after he came home from a day working with heavy equipment, Dale, and Sally, have made a success with lighter equipment, and the couple have fun doing it.