What do you do when you’ve already founded 15 local and national businesses throughout your career — many of them rental-related — and generated hundreds of millions in sales? 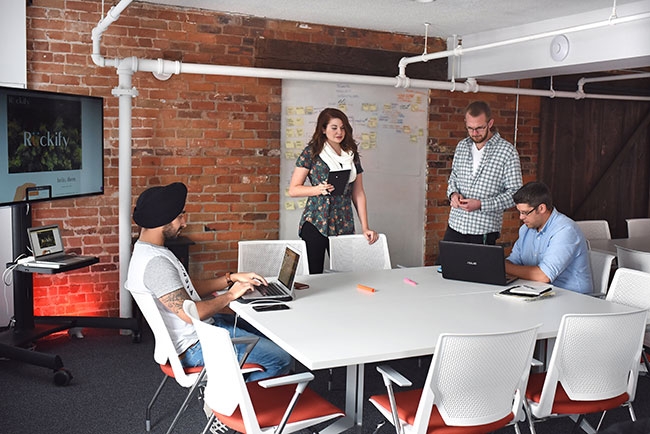 If you’re like serial entrepreneur Steve Cody, you start up another one!

Just last summer, Cody resigned as chief executive of Ottawa-based Better Software Company to focus on his newest venture: Ruckify (ruckify.com), an online marketplace where people can experience the financial and environmental rewards of sharing something they own with others.

A different kind of rental business
Cody has come a long way since age 15, when he first started up a window-cleaning business with just a bucket, squeegee, ladder and $1,200 to his name (a donation from his grandfather).

Struggling with dyslexia, Cody made a decision to drop out of school as a teenager. But he was always fuelled and driven by an entrepreneurial spirit. Consequently, he grew his first venture into a viable business over an eight-year span.

More than 25 years later, Cody has been the founder of more than a dozen businesses, including six rental companies: the popular Ottawa-based Cody Party Rentals chain of stores; the national franchise Monster Halloween Sales/Rentals; and numerous local businesses specializing in rentals of aerial lifts, Bobcats and general tools. Almost all of his companies have since been acquired.

“Where rentals are concerned, I think it’s cool that you can buy something once and make money from it,” he says of the industry. “It’s a great way of being in business. When you’re not dealing in rentals, you’re always having to re-inventory or chase more business, whereas rental customers come back more often.”

Interestingly, even his latest business — the Better Software Company — is a rental business of sorts. As a SaaS (software as a service) company, it “rents” out its franchise business management software and customers pay a monthly subscription for access.

Moving forward with his newest venture, Cody will combine the technical expertise he gained at BSC with his extensive background in rentals.

How Ruckify works
Essentially, Ruckify is a website and mobile app where people and businesses can post, promote, search, share and temporarily book any number of things from a specific geographical location.

It could be a Jetski or an RV, sports equipment, camping gear or even heavy equipment.

It could even be a chainsaw, which, in fact, is how Cody first came up with the idea for Ruckify.

After a tree fell in front of Cody’s house in 2013, his neighbour (tech CEO and Canopy Growth Corp. founder Bruce Linton) brought over a chainsaw to help clean up the mess. However, they soon realized they wouldn’t be able to get rid of the stump without a bigger tool.

“I realized someone in the neighbourhood probably had a bigger chainsaw — and maybe if I had an app to find them, I could get someone to rent it to me for free or at a really low price,” Cody recalls.

Cody let the idea marinate in the back of his mind for a few years, instead choosing to focus on the Better Software Company (which he grew to more than 30 employees and millions of dollars in annual revenue). Despite all that, he realized he could not let the idea go. Consequently, he made the decision only recently to step down from BSC to take on his newest dream.

“The moral of the story is that it is three-and-a-half years later and the tree trunk is still there, but I have a new company,” he says, joking, “and my wife is having trouble sleeping at night as a result of my decision.”

Many opportunities with Ruckify
While Ruckify is about sharing items, it can also be used for sharing physical spaces.

For example, a caterer in need of a kitchen for one day can log onto Ruckify to book available space. Likewise, the owner of a garage could use Ruckify to share garage bays with people looking for space to work on their own cars.

While Ruckify sounds a bit like AirBNB, Cody believes there are many more opportunities with Ruckify.

“We think there’s a lot more business to be had with Ruckify versus AirBNB,” he says. “With Ruckify, you’ll be able to book not only a cottage, but also a boat within the same transaction. It’s more all-encompassing because we will be allowing the opportunity for people to share all kinds of associated products.”

Ruckify will collect a small percentage on all transactions. However, there is no cost to post items for rent.

Insurance will be part of the Ruckify customer experience, too.

“When you set up your profile, it’s linked to our insurance provider, and insurance is based on the category you’re going to be renting from,” Cody explains. “Let’s say you’re renting out the use of your car. The person who is renting it for the day will pay an insurance fee on top of the price. It’s all built-in to ensure everyone is properly covered.”

As a result, average people will be able to use the Ruckify platform to create their own small business ventures.

Likewise, Ruckify can also be used by new and established businesses, including rental equipment companies.

“Like Shopify, Ruckify will be a platform for the ultimate customer experience,” says Cody. “It’ll be great for brand-new and existing companies who want to provide that enhanced experience, including those who already specialize in rentals.”

It’s not about renting stuff that Ruckify owns

Innovation in rentals
According to Cody, being innovative is about thinking (and even communicating) differently.

“We’re trying to create the future and that can be really hard,” he says. “For example, we’re creating something new, versus the traditional rental experience. But that can be challenging, especially when you’ve been in that industry all your life. It’s hard to think differently.”

“If we say ‘rent,” then Ruckify is going to be compared to any other traditional rental experience. But when you say ‘ruckify,’ it’s different,” says Cody.

So what does “ruckify” mean, anyway?

“It’s ‘to return’ in German,” explains Cody. The idea for the company’s name is all thanks to his 14-year-old daughter, who found the word through a simple online search. “We were going to call the company ‘Rent It’ but she reminded me that we’re trying to create a different experience. We needed to own a different part of the consumer’s brain, so she encouraged us to use a different verb.”

By that same token, Ruckify will be straying away from the verb “rent” on its platform, instead using the word “book” when people make transactions on the Ruckify website.

Social shifts toward a “sharing culture”
Cody believes that Ruckify will meet the needs of many demographics, regardless of age or location.

“There is a real social shift of people not wanting to own things, and that’s for a number of reasons,” he says. He points to people — from Gen X’ers to senior citizens — moving to smaller living quarters such as condos, which may not provide as much room for extraneous items.

Moreover, he sees the younger generations preferring great experiences over owning things and getting tired of buying and storing things they may not use all the time.

As an example, Cody points to other countries, where short-term rentals of everyday items are becoming more and more popular. “If you look at Europe and China, it’s very common to walk up to a basketball court and not own a ball, but you can rent one out of a machine,” he says.

Even more poignant, according to Cody, the appeal of Ruckify is also due to people’s interest in protecting the environment.

“Each time we rent, somebody isn’t building something. And that has a real impact on the environment. Think about how things are made,” he continues. “If you wanted to create a canoe business, you could buy and sell 100 fibreglass canoes…or you can buy a few and rent them out over a year. If you rent it, nobody is making more canoes and creating that environmental footprint.”

To amplify the impact of Ruckify, Cody has partnered with the Seedling Network, Tentree and other partners Canada-wide, to create the Tree Point Program. The company will plant a tree for every single Ruckify transaction made.

Plans for the future
Currently, Ruckify is a small group of seven employees, and Cody plans to keep his team small. Ruckify had its soft launch in late 2017 and plans are in the works for a national launch soon.

“I want to see Ruckify go international eventually,” says Cody. “Our investors are placing big bets and are expecting big things from us. We have also been contacted by possible strategic investors from the rental industry, which would be an instant game-changer.”

As for what happens over the next year or so? Based on Cody’s continued successes, the sky certainly seems to be the limit!