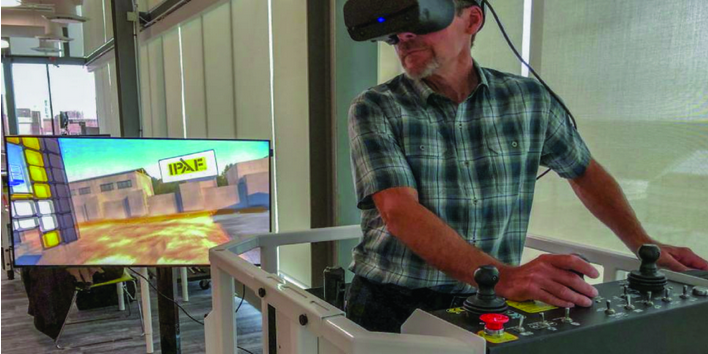 Serious Labs won an International Award for Powered Access (IAPA) for a significant innovation in the use of digital technology: the ability to renew a Powered Access License (PAL) Card through a virtual reality (VR) simulator, without even touching a physical machine.

“We are honored to receive this award from the IAPA judging committee,” said Jim Colvin, CEO, Serious Labs. “This is a milestone, not only for Serious Labs, but for the industry as a whole. Now available for the first time by VR simulator, operators may renew their operating licenses. Our training scenario is mapped to IPAF’s highest standards, and makes PAL Card renewals more convenient and accessible.”

According to IAPA co-organiser Access International, the judges praised Serious Labs’ cutting-edge program to update its VR simulator. “The in-depth and time-consuming work created a real life-like scenario, which makes renewing a PAL Card using the simulator safe and practical.”

Over a period of 18 months, Serious Labs conducted rigorous side-by-side testing in partnership with several leading IPAF training centres seeking to create a near-exact match between simulator and human assessment. The efforts resulted in a 97% predictive match for scoring and a 100% match for pass/fails during the final trial. Approval by IPAF’s General Council in September, 2021 unlocked a new digital avenue to recertification and provided training centres, employers, and operators with a new option for renewing their licenses.

“It was really nice to win this award. It was the culmination of basically two years’ worth of solid work,” said Darren Verschuren, International Account Director, Serious Labs. “We are grateful to all of our technical partners for recognizing the potential and importance of having a data-driven approach to digital training and a certification option, and for dedicating their time and resources to help us achieve this milestone together. This is their award as well for making this industry safer.”

IPAF has issued over two million PAL Cards worldwide, and its high-quality operator training is recognized in over 51 countries. PAL Cards typically need to be renewed every five years.

Serious Labs is seeing growing adoption of its MEWP VR, showing that it meets an industry need while providing a variety of desirable benefits.