Features Profiles
Safety is his byline

Is it that time of year already? As Dave Mintenko’s year as president of the CRA board of directors is almost up, it’s soon time for vice-president Tim Ranson’s presidential term to commence. As usual, the inauguration takes place at The Rental Show, which happens to be in Atlanta this February, and Ranson sounds ready. 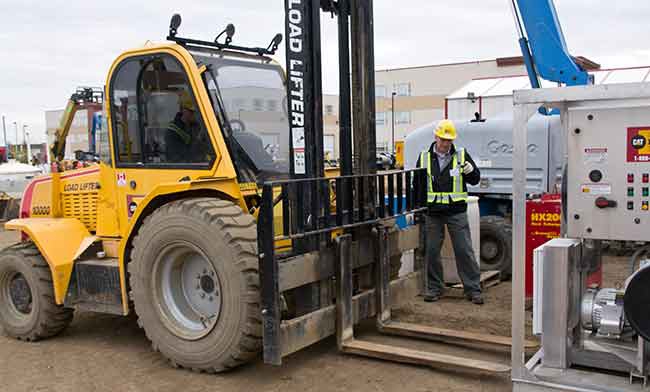 Good luck catching Tim Ranson without his safety equipment. The incoming CRA president has a long history of advocating for safe practices Is it that time of year already?

“We have several regional trade shows in Canada and in this next year we’ll see four trade shows in different regions throughout the country. Those regional shows really communicate to the rental membership. And it’s a vendor access point that’s proven very successful. In 2016, we’re going to be holding our first trade show in Edmonton, moving the Prairie Show from Saskatoon. And we see this show, even with the downturn, as being a very popular show.”

“Through my term as president – because I’m so ingrained in safety within the rental business – I’m looking for opportunities to bring that as a message into each one of my interactions at the local levels. Safety is going to be my byline, if you will.”

Ranson is technically a second-generation rental guy. He currently works for The Cat Rental Store in Edmonton. His education in the rental sector began while working with his late father at one of the family’s businesses, Shamrock Rentals, out of the area around Stony Plain/Spruce Grove, Alta. One of his family’s other businesses, a window installation company, was nearby.

They almost fell into the rental business accidentally, seeing a niche developing at the time and quickly doing something about it.

“The window business, it had some seasonality to it. And, you know, we were a distributor of a product that really ran its peak in the fall and early winter, so the spring was pretty quiet. So we thought what can we do in the spring? Well, lawn and garden seems to be moving forward, so we tried to capitalize on that.”

“So, we sold, serviced and rented lawn rakes, aerators, mowers. We represented a couple lines of product in the new variety, but what we found is people were asking as often about either renting a piece of equipment that they would only use once or twice a year, and small compressors fell into that. We were undercapitalized to become a full-fledged, community-based rental store,” Ranson says.

“We were running two businesses out of the same facility and not knowing – like so many small business people – [that] if you don’t truly know where the alligators in the swamp are, you’re going to carry on your merry way and not worry about them. And in our case, it was very simple; we were not prepared for the business model that most rental stores today find successful. You know, it’s a fairly capital-intensive business to get started and then help the business grow. It takes years and our business model was not equipped to manage that,” he says.

Ranson’s father eventually retired because of health reasons, but when that happened, Ranson wasn’t ready to take it over right then.

“At that point in time, I wasn’t positioned to work in the business. I’d left his employment to just basically go at it on my own as a young man and learn something different.”

And as that young man, Ranson got a job with the Alberta provincial government, amongst a few other destinations, and was part of the initial Alberta seatbelt awareness campaign in the early ‘80s.

“It was the first paid safety gig that I ever had. They were looking at creating compliance improvements in public transportation so they started with education in the schools systems, and going to local fairs and so forth. The program was basically an information campaign not unlike what you see with drugs or alcohol and the use of cellphones while driving. Governments are very adept at providing high level information that influences change.”

After this and a few more years with Arpac Storage Systems, Ranson caught on with Finning.

“I cut my teeth [at Finning] as a sales rep, and got to know not only the retail side of the business, new and used equipment sales, but the rental side of material handling.”

“As we set the Cat Rental Store business in 2001 through 2005 [we were] in high-level growth mode – [we were] growing through acquisition and through green starts in the rental world and really wanted to position our business in the marketplace in, primarily, areas where we’d have a good tie-in with our Finning Caterpillar product assortment. So industrial-commercial sites, heavy oil pipeline and mining were the communities that we focused on,” Ranson says. “And one of the gaps we realized, very early on, was [that] to deal with those customers, we needed a robust safety program. And so that request became my initial challenge, to develop the safety program.”

With the topic of safety, things have really changed in that interval, Ranson says.

“It’s interesting when I reflect back on where I’ve been able to influence or provide added value in our business. There’s a strong tie-in between our staff safety and the way we go to market and our relationship with our customers. Many of our customers demand a high-level safety awareness and I learned very quickly that that was an opportunity for us, and provided us with an additional value in the customer sales relationship.”

“Training is something that we now provide but it’s actually a small profit centre within our rental business because, it’s both through occupational health and safety regulations and the larger customers recognizing that you need to have competent people operating equipment, they can’t afford to have errors made because of people not being properly or adequately trained,” Ranson says.

Good luck catching Tim Ranson without his safety equipment. The incoming CRA president has a long history of advocating for safe practices

In terms of moving into the presidential position, Ranson has had a lot of experience with extra-curricular duties during his second run at the rental industry.

Ranson worked for Finning for five years, prior to 2001, then moved lock, stock and barrel into The Rental Store environment. He’s been involved in the rental association as a board member and other committees since about 2008 and worked with ARA Insurance and the risk management team out of Kansas City. He has also worked on a couple of other committees, including the trade show committee. And then in the Canadian market, he’s been directly involved with the board over the last five or six years.

Ranson is also pleased with the current state of the CRA.

“We’ve successfully raised the professionalism and value of membership of the association over the last few years. We’ve moved the association head office to Stoney Creek, Ont., and that was prompted by a desire to have a more functional and stronger association at its core. Nathalie McGregor is our managing director and she’s been very successful in bringing us to a higher level.”

But being the resident safety guy doesn’t mean Ranson can ignore things like the recent downturn in business.

“From my personal perspective on the health and safety side, we follow the business trends in terms of the number of people we deal with. And we’re in a downturn, certainly in the Alberta and B.C. markets… I’m not an economist, however the signs are suggesting it’s going to be a long one,” Ranson says. “From a health and safety perspective, it’s something I truly see as a risk, because you’re using fewer resources… You don’t have the staffing levels in a small branch that you might have had in a banner year… Rushing and cutting corners tends to be an outcome of that recipe. And when that happens, unfortunately, young and inexperienced workers, in particular, put themselves in risky situations.”

Of course, Ranson isn’t solely defined by his job. He still lives in the area close to where he cut his teeth in the rental equipment sector all those years ago, this time with his wife of almost 29 years, Suzanne. It’s also home to a few horses and “a mess of dogs and cats.” The couple has three adult daughters and two grandchildren.

“My wife and I live on a 40-acre plot north of Stony Plain, [Alta.,] and have been there for a number of years. We quite like the countryside and the solitude that comes with it.”

And in what will prove to be a busy year, he may enjoy that occasional solitude even more.