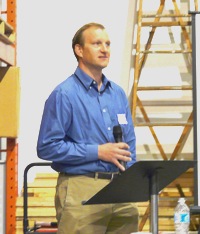 Apr. 29, 2010 – Regulations regarding the plated status of all rolling equipment was the main topic of conversation at the most recent meeting of the Canadian Rental Association’s British Columbia local chapter.

Apr. 29, 2010 – Regulations regarding the plated status of all rolling equipment was the main topic of conversation at the most recent meeting of the Canadian Rental Association’s British Columbia local chapter.

The meeting took place at Rentquip in Richmond, B.C., and brought together over 50 rental professionals to network and learn.

As previously stated, the hot-button issue at the meeting was the plating and insurance of rolling equipment. According to regulations set out by the Insurance Corporation of British Columbia (ICBC), all rolling equipment that operates in a publicly accessible place must have appropriate plates.

Rob Termunde of ICBC addressed attendees on this topic. The example he used to define what is and is not a publicly accessible place was that of a golf course parking lot. If the lot is ungated, then it counts as publicly accessible, even if it’s entirely on private property.

Part of the issue about these regulations is that they apply not only to vehicles, but to all wheeled equipment such as scissor lifts.

Jim Clipperton of Nor-Val Rentals is the president of the CRA B.C. local chapter and was in attendance at the meeting. He summed up one of the key objections that rental operators have to these regulations.

“Say you drop a scissor lift off in the parking lot of your local Future Shop. That parking lot counts as a highway, so the scissor lift has to be plated and insured. Once it’s inside the building, it doesn’t need insurance. Ninety-nine percent of the time, the equipment is going to be somewhere that it doesn’t need insurance. The regulations say that we have to insure these things for one percent of their working life,” says Clipperton.

Although incurring major expenses didn’t raise anyone’s spirits, Clipperton points out that the meeting had at least one positive effect.

“We had people out at the meeting that aren’t even members of the association,” says Clipperton. “It was a good chance for them to see the kind of work we do, and to find out that we’re ready to fight for the interests of rental operators.”

The next meeting of the CRA B.C. local chapter will take place at Rogers Rents in Kamloops. Please visit www.crarental.org for more information on the Canadian Rental Association.