Hydrodemolition robots are quickly growing in popularity as an effective and speedy method of concrete removal for repair and renovation. 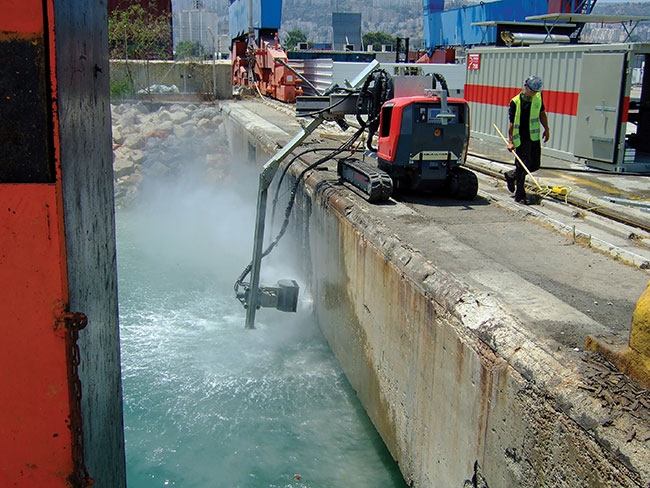 Someone other than the operator should watch the pump and water hose for safety hazards. For example Hydrodemolition robots are quickly growing in popularity

The remote-controlled robots also help keep the operator out of harm’s way. However, hydrodemolition robots, like all equipment, require careful operation to avoid accidents.

Here are a few of the most important safety points to remember when operating a hydrodemolition robot.

1. Operate safely
No one except the operator should be within 35 feet of the machine during operation. The operator should stand at least three feet away, staying constantly aware of the water jets. Also, operator should be sure to wear a helmet, ear protection, safety glasses, face protection, steel-toed boots, gloves and a safety jacket and pants. It’s important to remember that even protective clothing will not shield a worker from direct contact with a high-pressure jet. In case of injury, seek medical attention immediately.

While some machines include an automatic function that allows the robot to run without constant operator input, the equipment and remote should never be left unattended.

2. Never work alone
One operator easily controls a single hydrodemolition robot, but there should be at least one other worker acting as a spotter watching for safety hazards and monitoring other equipment. The second person can also quickly come to the operator’s aid if there’s an accident.

3. Carefully watch equipment
The spotter should also watch the pump and water hose for safety hazards. For example, if the robot malfunctions and stops moving, yet continues to shoot water, it will eventually break through the surface. In this situation, the second worker can stop the water flow by shutting off the pump. To speed up the process, buyers should look for a robot operated with a remote that includes a pump shutdown option.

The water hose is the other thing to watch. As a result of the high pressure, even small leaks will shoot out of the hose at a similar velocity to water out of the robot. This could mean serious injury to anyone caught in the stream. In an effort to avoid these accidents, some robots will automatically shut down if pressure starts to drop. Users can check for hose leaks with a piece of wood or other material, but should never do so with their hands.

Someone other than the operator should watch the pump and water hose for safety hazards. For example

5. Install safety barriers
Most hydrodemolition robots feature heavy-duty rubber shields around the cutting head, but broken concrete still occasionally escapes, sometimes flying long distances at high speeds. Contractors should block off a minimum of 82 feet around the machine with plywood barriers and install warning signs. High-strength netting can also be installed around the robot.

Contractors should also install protective barriers around the water hose at connection points and in areas open to pedestrians or cars. They should replace hoses when the outer cover is worn or damaged and do not lay hoses on sharp objects.

In at least one way, hydrodemolition is much safer than demolition with pneumatic hammers: dust. Many jurisdictions are now restricting the amount of silica dust workers can be exposed to in a given amount of time. Because the debris from hydrodemolition is soaked with water, airborne dust exposure is obviously much less of a concern.

Make sure to read a hydrodemolition robot’s operating manual before use. In addition, look for training courses offered by some manufacturers to improve jobsite safety, efficiency and quality of work.

Shawn Kirkpatrick is the service and application specialist for the U.S. distributor of Aquajet Systems AB, Brokk Inc. He provides customers with technical support service before and after the sale for both Aquajet hydrodemolition robots and Brokk demolition machines.
Print this page