The 2022 Rental Mart includes a number of “firsts.”

Interactive education sesssions, special association events, new exhibitors and a fall date make this year’s Rental Mart a can’t-miss. Let’s get together for the first time in a long time!

It’s a whole new Rental Mart. The return of Canada’s trade expo for the equipment and event rental industry brings with it a refreshed and revised approach featuring many “firsts” never before done in the show’s 30-year history.

“Because of the biennial schedule for the Rental Mart, two years of COVID restrictions meant four years without a live show,” explains Robert Elias, show manager. “We saw that as an opportunity to really take a hard look at what we do and make some changes that we think will add excitement and novelty to the 2022 edition and future Rental Marts.”

One obvious first is the move to a fall date: Sept. 27 and 28. The 2022 Rental Mart was originally scheduled for its usual time in March, but the January Omicron surge in Ontario forced a rescheduling. But, depending how things go, the fall date may become a permanent shift. Spring is a busy time for rental shows because it’s the hot buying season for rental equipment. But a fall date may enable the Rental Mart to avoid scheduling conflicts with other shows, especially the ARA Show, while giving attendees a second chance to look at fleet ahead of winter and exhibitors a chance to showcase some of the next springs’ offerings early. “We’ll be assessing response to the 2022 Rental Mart carefully to inform our decisions about future editions,” Elias says. 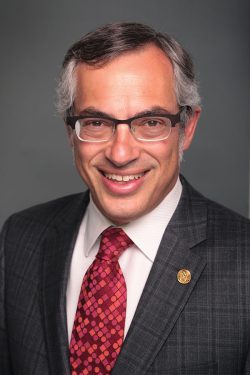 Next on the list of changes is a pumped-up focus on education and discussion with high-profile exclusive speakers. The Hon. Tony Clement, the former federal industry minister, will offer his thoughts on the supply chain issues facing us all in his keynote presentation followed by a Q&A session. His expertise in industry and labour led him to co-found Reshoring Canada, a group that advocates for Canadian supply chain modernization, and aims to bring manufacturing back to Canada. Join us at the Centre Stage at Rental Mart, where Clement will share insights and his recommendations for what our country and you can do to protect our access to needed equipment in the future. In another first, Centre Stage will be located right on the show floor with a bar attached so attendees can watch the presentations in a relaxed and comfortable environment. Thanks to Centre Stage sponsor, Western Global, for making this possible.

The Women in Rental panel will make its awaited return on the second day of Rental Mart 2022. It’s the first panel discussion ever held at a Rental Mart. We’ll be joined at Centre Stage by Angie Venekamp, the general manager of Rental Network and American Rental Association Region 10 director representing Canada on the ARA board of directors; Jule Elia, district sales manager at Herc Rentals; Rachael Caron, business creation manager at Crown Verity; Andrea Hetu, president of Equipements Brossard; and Debbie Mackie, branch manager at Cooper Equipment. Each of them brings their own experience in Canada’s rental industry and each of them will share lessons from years of expertise.

Angie Venekamp is the general manager of Rental Network, an equipment and event rental house in Squamish, B.C. For over 15 years, Angie has been deeply involved in the B.C. and Canadian rental community. She currently sits on the ARA’s board of directors where she represents Canada and serves as Region 10 director for the association. She was honoured as the ARA Region 10 Person of the Year in 2012 and as one of Canadian Rental Service’s Top 10 Under 40 in 2013.

Jule Elia builds businesses. She’s currently the district sales manager for Herc Rentals, but prior to that, she has a 40-plus year tenure in the Canadian rental industry. She started in the wonderful world of equipment in 1978 when she joined A1 Equipment Rentals in Toronto. A rising star, she quickly moved through the ranks from sales positions to vice-president of the company. Since then, Elia has helped turn small companies into attractive buys and guided teams at A1 and Rapid Equipment Rental through acquisitions by Stephenson’s Rental Services and Herc.

Rachael Caron found her rental calling later in her career. She has a background in social services and worked in that field for over 20 years. As the business creation manager, Caron now brings her care and problem-solving abilities to Crown Verity. She’s served the needs of the rental community for over six years through her role at Crown Verity and is also part of the Crane Association of Ontario’s board.

Andrea Hetu grew up in the rental industry and has experienced nearly every role at the family business. In January, Hetu took over as president of Equipements Brossard when her father stepped down. In her current role, she’s applying three years of experience as co-president and a degree in administration and business management to the role.

Debbie Mackie started her career in rental as a rental coordinator in 2003. Using her customer service background, Mackie became the first female branch manager at SMS Rents in 2012. During her time with SMS, Mackie managed multiple branches at the same time until the company was acquired by Cooper Equipment Rentals in 2015. Now, Mackie is a branch manager at Cooper, and is excited to share insights from over 20 years in the industry.

These strong ladies are prime examples of what women can do in business. On Sept. 28, they’ll share insights on how to create a more inclusive industry and help women thrive in rental. 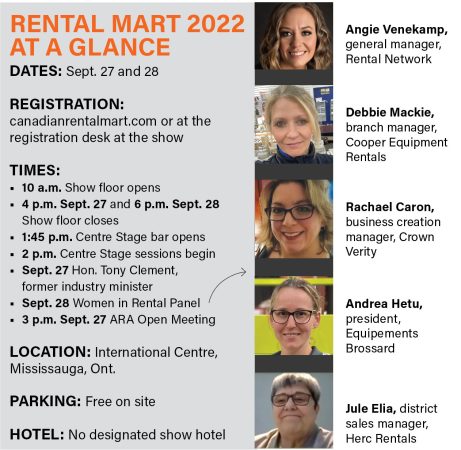 The 2022 Rental Mart marks the first time the American Rental Association will have a big presence at the show. Following Clement’s presentation on Sept. 27, the ARA will host a meeting open all where Venekamp, Josh Nickell (ARA equipment sector director) and James Auerbach (ARA event sector director) will talk about what the association is doing for its Canadian members. That discussion will be followed by some social time in the Centre Stage area.

In another first that is not actually part of the Rental Mart but still pretty cool, the Canadian Rental Association will be hosting a Member Appreciation tour to a Toronto Blue Jays game against the New York Yankees after Day One of the show. Contact the CRA for details.

Seeing the latest offerings from Canada’s top rental fleet suppliers is nothing new at the Rental Mart, but the 2022 edition will feature some new faces. See above to get familiar with some of the dynamic companies looking for your business.

The Rental Mart is back and it’s time for us all to get together again in person. Mark your calendars, register online, make your travel plans, have an employee man the counter and make your way to Mississauga Sept. 27 and 28. See you at the Rental Mart!

Come see the latest in rental equipment from*: