Those electing to look at used equipment missed one of the best show floors in recent Rental Mart history, featuring booths packed with more heavy iron than the show has seen in a long time. 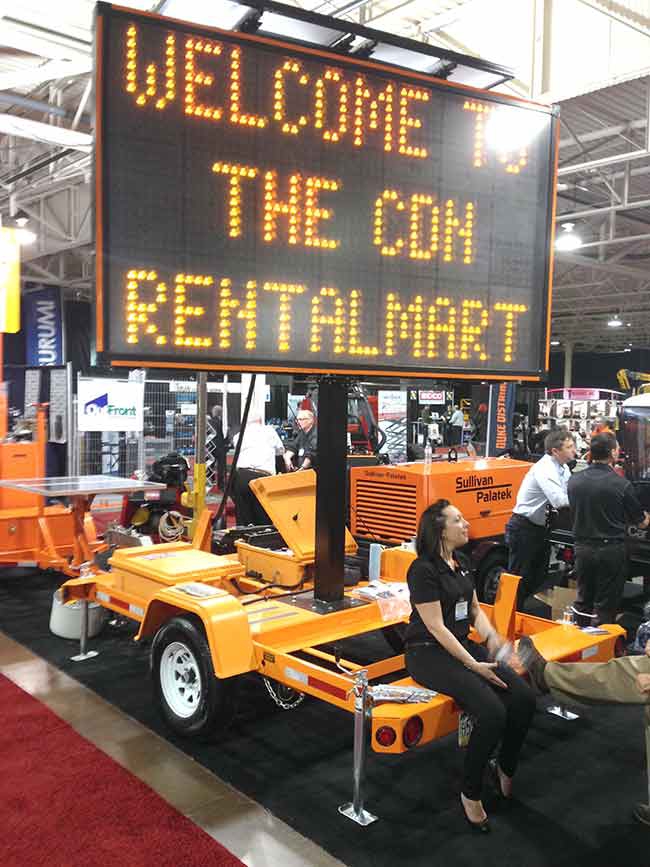 Stanmore, SkyJack, Haulotte, Genie, A.E. Sales and Cavalier all had big lifts on the floor. There were no fewer than eight software companies exhibiting, presenting a wealth of choice for those looking to upgrade their systems. There was extra interest in the room with Occupational Safety Group and Haulotte running scissor safety training on the first day, and Fuels Learning Centre and L.B. White providing propane heater fuelling training on the second. The propane course got an extra lift from Stephenson’s Rental Services, who provided a last-minute 100-pound cylinder, and Hy-Cor International, who helped out with an extension cord.

Even with the lower attendance, many exhibitors reported excellent results. “I never stopped talking from ten in the morning until three in the afternoon,” reported Matt Rahn of SkyJack.

No question, the numbers were down. Approximately 248 rental store attendees toured the 2016 Canadian Rental Mart, representing about a 25 per cent decline from the 2014 edition. Factoring into the low turnout was a large equipment auction being held in nearby Bolton, Ont., and the generally slow business conditions in the Ontario economy right now.

“I actually met two Ontario stores I’ve never heard of before,” said Jim Freeman of Rentquip. “I didn’t think that was possible at this stage. The good thing about this show is that a lot of the smaller independent guys come out.”

CRA Ontario banquet shines
The Ontario Canadian Rental Association hosted an esthetically appealing banquet on the first night of the show, attended by About 200 CRA members. Four expertly decorated tables graced the front of the room from NJS Design Event Party Rentals in Clinton, Ont., Maclean Sherwood Event Rental in Brampton, Ont., and GNS Party Rentals. The fourth contestant was an out-of-the-box entry by Brandt Tractor! In an innovative and clever marketing move, the equipment dealer entered the contest and did one of the tables up in Brandt colours and logos. NJS Design won the contest, as voted on by the banquet attendees. The prize was $1,000 worth of supplies from National Event Supply and a cover story in this magazine.

NJS Design also won the Ontario President’s Image Award in the Party and Event category. Cooper Equipment Rentals won on the Equipment side, and SkyJack was awarded Rental Supplier of the Year for Ontario.

New faces front and centre at CRA B.C. show
The B.C. Canadian Rental Association put on another lively show at the Cloverdale Agriplex in Langley, B.C., on Jan. 23. Over 100 attendees toured 40 exhibitors in a new venue – the much larger main Agriplex building. The effect was a more open and inviting show floor with improved sight lines. The show began on the Friday afternoon and ran through Saturday, ending with the CRA B.C. banquet on Saturday evening. Banquet-goers were entertained by Billy Bagpipes and heard speeches from Jim Clipperton of Nor-Val Rentals, the local president; Angie Venekamp of Rental Network, the B.C. national director; and Tim Ranson of Cat Rentals in Edmonton, the national CRA president.

Awards were also handed out at the banquet. Husqvana won B.C. Supplier of the Year. Dale and Sally Benner of Rent-It! Canada in Sechelt, B.C., accepted Rental Store of the Year. This win was emotional for the Brenners, as they recently lost their long-time mechanic, Marv Wallance, to cancer.

Angie Venekamp said farewell as national B.C. director. Steve Provost of United Rentals will be introduced as B.C. national director at The Rental Show in Atlanta.

The show was well supported by sponsorships. Notable was the presence of United Rentals and Sunbelt Rentals as major sponsors, perhaps signaling a new interest in supporting the association from major national franchises.

“There are a lot of new faces here at the local level on the director board,” Nathlie McGregor, CRA managing director, noted. “They are upbeat and eager to help rental businesses and grow the local association.” McGregor reported registrations were up 10 per cent from previous year.

Rewards for all at CRA Atlantic
The man from Hewitt Rentals loaded his new Little Wonder Brushcutter into the back of his pickup and slammed the tailgate. It was one of 11 of these machines that Hewitt had just purchased right on the G.C. Duke booth in the last minutes of the Canadian Rental Association Atlantic trade show, Feb. 13 in Moncton, N.B. “There,” he said, “I guess that that will show anyone who says there is no point in going to a CRA show.”

Saying that would be difficult indeed after the events of Feb. 13. Hewitt Rentals, a chain of 30 stores across Quebec and Atlantic Canada, brought around 20 red-shirted representatives to the show who spent the morning touring the booths and taking notes. After lunch, the crew assembled in a big meeting in the eating area and spent the afternoon comparing notes and planning their next move. Just before the end of the show at 4 p.m., the meeting broke up with eight pages of orders ready to be placed with the vendors in the room.

“Great turnout from the rental stores and great turnout from the associate members,” commented Hank McInnis, CRA Atlantic national director. “Still struggling to rebuild out board, but once that is done we can move forward. We have plans for golf, plans for educational meetings. We are also sponsoring the national board members’ meeting here in September. We had a great turnout last night for the banquet. It was a little special for Moncton not to be snowed in in February.”

About 65 attendees toured the show with 88 at the Friday night banquet. Show-goers heard from CRA Atlantic president, Dan Spencer, CRA national president, Tim Ranson, and official CRA Atlantic storyteller, Garth Scott, who arrived with his poster board full of photos from the past years’ association events.

On a floor packed with more equipment than ever before

The 35th edition of the Prairie Regional Trade Show took place somewhere other than Saskatchewan as the CRA moved its event to the Edmonton Expo Centre on March 4 and 5. The event was much larger than previous shows, with 56 exhibiting companies taking 150 booth spaces.

Everything got started on Friday night with a meet-and-greet reception at the newly renovated DoubleTree West Edmonton. The room was abuzz as rental store owners, employees and suppliers renewed acquaintances. The entertainment was a very popular casino night with the opportunity to win a number of prizes. Rumour has it that the festivities continued into the morning hours.

The next morning, the trade show started with a variety of products on display including china, tableware and tents through to small hand tools and larger equipment including light towers, generators and skid steers.

Russell Taylor from Ron’s Equipment Rental in Yellowknife, N.T., made the trip to the show. He said he comes every year to this event and deals with a least half the exhibitors on the show floor. He explained it is an excellent event where he gets to put a face to the names he deals with.

Drew Wood from M.S. Sales was quite pleased with the new show format. “It is a great building with a nice layout. It was time for a change,” he commented.

Michel Desmeules from Tsurumi Canada echoed the positive comments. “This location draws more people from Edmonton to Calgary and even those north of Saskatoon. Edmonton is easier to get to and provides an opportunity for new people to attend the show.”

Nathalie McGregor, CRA national managing director, was extremely happy with the move to the new venue. “The move was very easy,” she explained, “and it was very well organized thanks to the Alberta-based team of volunteers.”

The trade show closed Saturday afternoon with over 200 delegates coming through the doors – a healthy increase from the 2015 event.

The annual CRA Alberta banquet followed the show, with a number of awards handed out following dinner. Receiving the national Award of Merit posthumously were Doug Mitchel, Jim Johnson and Jean-Marc Turcotte. The Exceptional Volunteer award went to Chris Baker. The recipient of the Doug Mitchel Supplier of the Year award was Andrew Wilson of Atlas Copco. Finally, the Dickie Doo was presented by last year’s winner, Doug Krasowski of Wacker Neuson, to Geoff Allen of Genie.

Entertainment at the banquet was by the Duelling Red Piano group who kept the party hopping with their musical talents.

The Prairie Show will return to Edmonton in 2017.