You can protect your rental equipment from the dangers of exposure to un-burnt hydrocarbons with Positive Air Shutoff Systems (PASS). 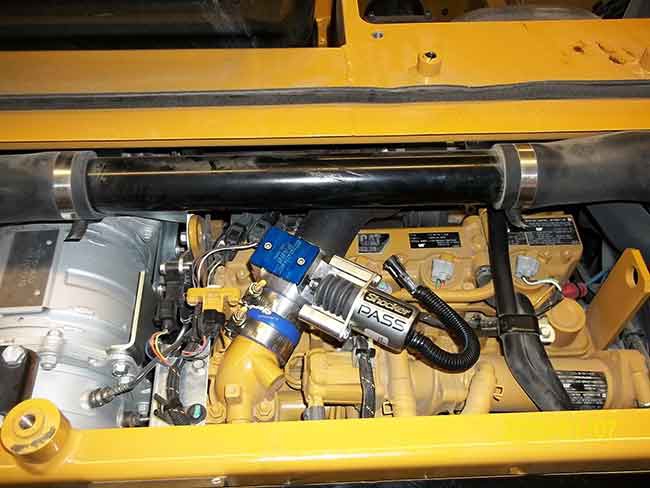 You can protect your rental equipment

Many catastrophic accidents —including some major disasters, where people tragically lost their lives — have happened because diesel engines were not equipped with PASS.

Commonly referred to as e-kill (electric/electronic kill switches), PASO (positive air shut off), and PAS (positive air shutdown), PASS technology is specially designed for diesel engines that come in contact with natural gas, propane or other flammable gases. As such, it is of most benefit to anyone in industries that use diesel-fuelled equipment for oil and gas, mining, power generation, airport support, landscaping, landfill and pipeline purposes; and/or for delivering or hauling petro-chemical products.

Putting a stop to diesel engine runaway
Since diesels are compression ignition engines, fuel shut-offs are ineffective in stopping the engine if it is drawing a combustible air/gas mixture into its air intake. A diesel engine does not require electricity or a spark to run. As such, in the presence of un-burnt hydrocarbons, the engine will burn the fuel in the atmosphere indefinitely. Even a small leak of flammable gas in the air can lead to diesel engine runaway, making the engine over-speed at higher and higher RPM until it explodes — destroying the engine and causing catastrophic damage to the surrounding area, even maiming and killing people in the process. Removing a key from the engine does nothing to stop runaway. The only way to prevent and stop it from happening is by shutting off the air supply to the engine, starving it of gaseous fuel.

That’s where the need for positive air shutoff comes in, particularly in petrochemical industries where diesel engines frequently come into contact with combustible vapours.

Requirements for PASS protection
Because of the potential of great risk to people and property, some governments and industries now mandate operators to use diesel engine runaway protection technology. However, regulations and ensuring compliance vary greatly. Ultimately, liability rests solely on the owner of the equipment.

The National Energy Board works to ensure PASS compliance of NEB-regulated companies and contractors who control diesel engines (and potential ignition sources) in areas where explosive gases may be present, such as on pipeline systems.

As well, to prevent diesel motors from running uncontrolled in the event of a natural gas blow from a well, the Alberta Energy Regulator’s Directive 037: Service Rig Inspection Manual states that any diesel engine within 75 feet of a well must be equipped with some form of shut-off system, which can include:

PASS evolution
Comprised of a team of entrepreneurs with a collective 150 years of experience in the Alberta oil industry, Headwind Solutions first decided to diversify its product offerings in 2009, moving from manufacturing solar-powered chemical injection systems, to light truck PAS systems for the automotive market.

As one of only a small group of PASS manufacturers worldwide, Headwind saw an opportunity to build a more competitive business.

“The oil and gas industry has long been a major source of technological and safety innovation,” says Headwind sales manager, Steve Podolski. “Providing the sector with a simple, dependable and technologically advanced product to create a safer working environment for industry workers quickly became our company’s mantra.”

Over time, PASS blossomed into a full-time manufacturing effort, with Headwind building systems for all sizes of diesel engines, to include the entire commercial market
as well.

The end result has been the Shocker PASS product line: an electromechanically operated shut-off valve for diesel engines big or small, designed primarily for the oil and gas market. This mechanical component can sense high-revving situations and automatically shut the air supply off to the diesel engine, running off magnetic sensors or CAN bus, or even generator ends for generator applications.

Today, Headwind has Shocker systems working on six of the seven continents and is a supplier to some of the largest equipment dealers across North America, as well as some of the world’s leading heavy equipment manufacturers.

Old versus new
Positive air shutoff systems are nothing new: in fact, the technology has been around since the 1950s. However, says Podolski, “I like to compare the older tech to a rotary phone with a 40-foot cord on the kitchen wall. It still works, but it’s no smartphone. Newer PASS tech like ours is much more up-to-date in the way it handles controls and signals from the vehicles and equipment.”

PASS has evolved in a number of other ways over the years. Traditionally, such shutoff systems have been made of cast aluminum, which can break easily and even distort when tightened with clamps. By using higher quality, corrosion-resistant aluminum, like 6061 billet, “…an elephant could step on it and nothing would happen to it. And at the same time, it’s lightweight,” Podolski explains.

Advances in PASS technology have increased flexibility in dealing with extreme temperatures and altitudes. Modern PASS can be designed to auto-reset as equipment moves from one climate or altitude to another, which is especially useful in a province like Alberta.

While older PASS technology has been used on newer equipment, there are times it doesn’t fit into everything. “Often, it’s too cumbersome,” says Podolski. “By contrast, newer PASS tech is smaller, more compact, and easier to install.” PASS usually requires a relatively simple upgrade to your equipment. Installation can be done by a mechanic or even an apprentice, within as little time as 90 minutes.

Headwind designs and builds the majority of parts for its PASS Shocker valve in-house. Even in the few short years since the company began providing PASS technology, it has seen the design and manufacturing process transform and become more efficient. Because different tiers of control change how air flows in an engine, and because the amount of room under the engine hood can vary across different pieces of equipment, Podolski says using SolidWorks computer modelling and 3d printing are especially valuable.

“We used to draw everything by hand,” he recalls, “and getting a model put together would take a couple days as a result. Now, once we’ve done up a drawing, we send it to the design department, who then drafts it in SolidWorks and makes the prototype up quickly in plastic through our 3D printers. Not only that has this sped up our time immensely—it’s also saved us money, because we don’t have to waste a bunch of aluminum in building expensive models.”

Other benefits of PASS
Clearly, PASS provides a significant increase in safety — to equipment, to people and to surrounding areas. But that’s not the only benefit it offers. Shocker PASS products offer an auto-reset feature. Auto-reset not only ensures the air supply is shut off when it senses engine overspeed, it is also designed to open itself back up automatically. This eliminates the need for calling in reinforcements to reset the positive air shutoff valve, as it reopens itself after it reads engine zero.

“I’ve heard many stories about people operating equipment that uses a PASS manual reset, and they would have to call their boss every time things shut down,” says Podolski. “Then the rental company has to send a mechanic out just to reset the machine. In the city of Edmonton, the rental companies say it costs about $500 every time that happened, and that is out of their bottom line.”

PASS technology is not necessarily required everywhere. However, Podolski says, the choice — when companies have the option — should be a no-brainer for equipment rental businesses in industries like mining, oil and gas. “Considering what could happen in the presence of flammable gasses, and looking at all the other benefits PASS provides, it just makes good sense to have a positive air shutoff system on your diesel engines.”