A strong partnership between the owners, good business sense, and a work environment that makes for happy and loyal employees – all of these things and more have added up to success for Rental Village. 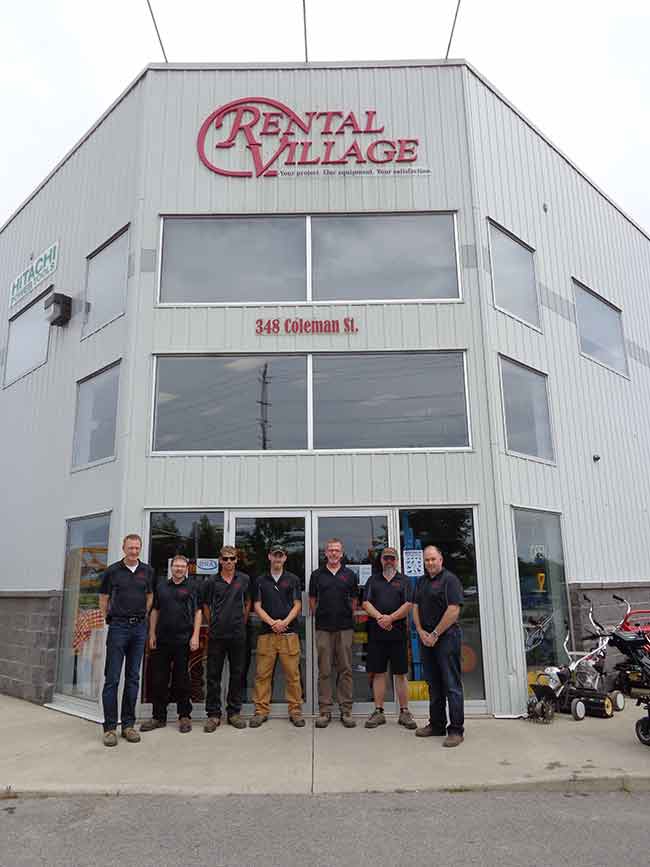 Finding and retaining great staff has been a key to success as Rental Village has expanded over the years to four locations.

Rental Village is owned by brothers Terry and Mark Monette, and offers items for rent and personalized service at four locations in the communities to the northwest of Ottawa. It’s a bit of a unique rental company in that the owners chose to expand into event supplies rental and set-up services – and expansion of that sideline continues year after year.

But before we get to that story, a bit of history. Rental Village was started in Carleton Place in 1983 by Ralph and Dawna Monette. The original rental list had only around 20 items. The company added Stihl sales in 1985, and along the way, Ralph and Dawna’s sons Terry, Shawn and Mark all came on board. The family opened a second location in nearby Perth in 1997, and that same year, Ralph and Dawna retired. A Smith Falls outlet was christened in 2001 and four years later, the Monettes relocated their flagship Carleton Place store to a new location. In 2007, the firm opened a fourth store in Stittsville, and Shawn left the business in 2012.

It was back in 1991 that the business took the plunge into rental of event supplies. (Event rentals now account for about one-quarter of total Rental Village sales.) That year, Terry was taking a plunge of his own (down the aisle to wed his then-fiancé Carrie), and he says his wedding was just the incentive he and his brothers needed to get the sideline up and running. They purchased some tables and chairs and linens for the wedding, and the number of items available for rent has grown steadily ever since. Catering equipment, six-foot candelabras, tiered cupcake stands – even a chocolate fountain – these are just some of the many items that have been added to the roster. “In addition to weddings, we also do a lot of holiday dinners and more casual family reunions and parties,” Terry explains. “We take the dirty dishes away and wash them here, and this allows people the time to visit a lot more with family and friends without having to worry about clean-up.”

In 2003, Rental Village expanded the event rental division, and began offering tents, tent setup and other event setup services. “Outdoor weddings and other events are very popular and we rent out tents all summer long,” Terry notes. “We show the physical layout ahead of time on the computer to customers using party-planning software called Party CAD. It really helps them to be able to see what it will look like in advance.”

The Monettes note that the size of the typical event guest list is much larger than it was compared to a decade ago. In terms of other trends, the “rustic look” has become very big. To accommodate demand for rustic items, Rental Village now offers burlap-style tablecloths (used with pieces of lace and white cloth to ensure some glamour) as well as dark wooden accent pieces. But making all that happen wasn’t as easy as it sounds.

“A little while back, we were getting lots of requests for wooden benches for wedding ceremonies and family-style setups for dinner receptions, but we couldn’t find anything online that was suitable,” Terry says. “Benches add a more communal gathering experience, and an old-fashioned look and feel to a wedding. Mark said ‘Let me see what I can do,’ and he surprised us with a very attractive sample bench. He’s handy that way.”

Mark has since made enough benches to comfortably seat 150 people, along with things like small wooden risers (little platforms on which items such as desserts can be placed on buffet tables at different heights) and wooden brackets to mount mason jars to their candelabras. In addition to renting out items for private events, Rental Village strives to be part of many community events as well, from bridal, home and trade shows to local festivals such as the Festival of the Maples, which is held each year at Stewart Park in Perth. They even added an inflatable movie screento the inventory and are offering it to local communities for family movie nights in parks.

Challenges
When asked about some of the current challenges facing Rental Village, Mark looks at the big picture trends over time. “Well, all rental companies have had the challenge over time in that tools are much less expensive than they used to be,” he observes. “But on the other hand, the number of people doing do-it-yourself projects has increased quite a bit, so they need specialty tools for that, for flooring, installing interlock or building a deck.” Over the last few years, Mark says they’ve added towable lifts to their roster, which are always in demand, as well as dump trailers, floats, utility trailers and more compact equipment. “It’s all about niche projects,” he says. “Every year we strive to increase or change our inventory. We always try to be aware of current trends in the market to meet our customer’s needs and offer quality tools.”

Finding and retaining great staff has been a key to success as Rental Village has expanded over the years to four locations.

In terms of whether the challenges of one location or another is different than any other, Mark notes that while three of the four are similar, Stittsville stands apart. “We discovered it’s more of an urban community,” he says. “It’s very close to Kanata, just outside of Ottawa, The household yards are smaller, so our two-hour rates really get used in that market.”

With four locations being owned and run by two brothers, it’s hard not to ask how that plays out day to day and year after year. But both Terry and Mark have the same answer when asked what the challenges are in working with a sibling. Mark says with a smile, “The question is more like ‘What would it be like not to work with my brother?’” and Terry smiles too. It’s clearly hard for them to imagine it.

Retaining employees is one definite real and ongoing challenge however – as it is for many small businesses – but the Monettes have found solutions that work. “We are running a small business and it’s tough to compete financially on the wage front,” Terry explains. “We ofer health benefits as well as a top-up RRSP that is available to all our staff. Without great staff around us, it would be impossible to do what we do. So we treat our employees like family rather than staff, and that comes into play when someone is sick or has a family crisis. We don’t offer sick days per se, but we don’t dock someone’s pay or pressure them to make it in if they can’t.” He also notes that if they were really focused on every dollar, they would lay some staff off in the winter, but they try not to do that and don’t plan to start. “In a way, that impacts our bottom line, but it also benefits us because we keep our staff,” he says. “It’s a two-way street.”

And the 25 staff members do see that. Last year, out of the blue, Darlene Monette (the Rental Village office manager) says with pride that the staff got together and surprised Mark and Terry with a party at a hall with all the trimmings, along with two plaques for being such great bosses. “To be appreciated like that was quite a surprise,” Terry says. “We pour an awful lot into our business and you sometimes wonder if anyone notices, so it made us feel very much appreciated.”