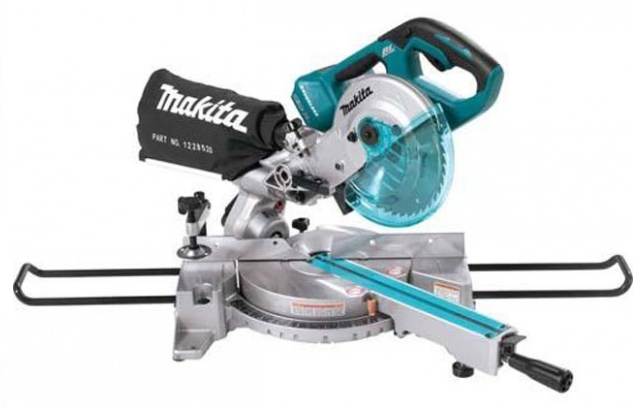 The XSL02Z is the first in the cordless miter saw category to be powered by two 18V lithium-ion batteries. With Makita’s exclusive 18V X2 technology users get 36V power and run-time — without leaving the 18V battery platform. It features an efficient brushless motor that delivers 5,700 RPM, the fastest blade speed in the category, for true corded performance.

This new cordless solution is part of Makita’s expanding 18V Lithium-Ion series, which will exceed 125 tools in 2016, and is the world’s largest cordless tool line-up powered by 18V Lithium-Ion slide-style batteries. Makita 18V Lithium-Ion batteries have the fastest charge times in their categories, so they spend more time working and less time sitting on the charger.

The XSL02 is powered by an efficient Makita BL™ Brushless Motor with direct-drive gearbox and electric brake that delivers a full 5,700 RPM: over twice the speed of the previous model and the highest RPM in the category. The higher blade speed combined with Automatic Speed Change™ Technology, which adjusts cutting speed and torque during the cut, gives users faster, more efficient cutting.

The XSL02Z delivers large dimensional lumber cutting capacity, with 2″ x 12″ at 90 degrees and 2″ x 8″ at 45 degrees. The saw has a four steel rail sliding system that increases rigidity and four linear ball bearings to produce smooth, dead-on accurate cuts right out of the box. Similar to other models in Makita’s miter saw line-up, the XSL02Z has a direct-drive gearbox for increased cutting efficiency and less maintenance than a belt-drive model. It weighs only 28.2 lbs. (with batteries, sold separately) for increased jobsite portability.

For improved tool performance and extended battery life, the XSL02Z features Star Protection Computer Controls™. Star Protection is communication technology that allows the Star Protection-equipped tool and battery to exchange data in real time and monitor conditions during use to protect against overloading, over-discharging and overheating. For increased versatility, the XSL02Z can be powered by Makita 18V LXT and Compact Lithium-Ion batteries with the star symbol on the battery indicating Star Protection inside, including 18V Lithium-Ion 2.0Ah, 3.0Ah, 4.0Ah, and 5.0Ah batteries.