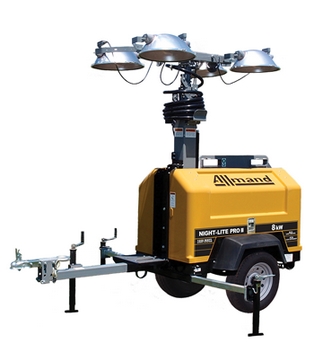 Further adding to the Pro II’s serviceability features, the newly designed plug-in light ballast assemblies are fully accessible with the doors open and may be easily removed for service. The ballasts feature replaceable components that can significantly reduce repair costs when compared to one-piece “potted” ballasts.

A four-point stabilizer system provides stability in adverse weather conditions. The stabilizer system features two sliding side outriggers with swivel screw jacks, as well as swivel screw jacks on the trailer drawbar and the rear of the enclosure. When the stabilizers are properly deployed, the PRO II can withstand wind gusts up to 65 mph. Captive lock pins hold the outriggers in place in the extended or stowed positions and eliminate the possibility of lost or dangling pins.

Also new in the PRO II is the self-locking spring-loaded tower latch on the “lay-down” models. This latch automatically locks the tower in the upright position. The manual winch to raise the tower from its stowed horizontal to the upright position is conveniently located on the side of the trailer enclosure and keeps the operator away from potential danger as the tower is being erected or lowered. A captive pin on the rear tower support locks the tower in the horizontal position for towing or storage.

Allmand Night-Lite Pro II V-Series light towers feature a hydraulically-actuated vertical-only tower that can be fully raised or lowered in just 20 seconds. With the lights contained within the footprint of the trailer, less space is required for storage or shipping and the potential for damage due to lights hanging over the rear of the trailer is eliminated.

An 1,800-rpm, liquid-cooled Kohler, Kubota or Cat diesel engine powers the units, which also feature a glow plug cold-start aid and an automatic shutdown for low oil pressure and high coolant temperature. A 30-gallon polyethylene fuel tank provides up to 60 hours of continuous operation.
All Pro II series towers also come with 13-inch tires, double-wall molded fenders built to eliminate dents and corrosion, forklift pockets, a lifting eye, tie-down rings and an adjustable height combination two-inch ball/three-inch pintle hitch for easy transportation. Perhaps the most obvious change is the molded poly “gull-wing” style doors. Not only are these doors impact-resistant and rust-proof, they also offer full access to all major service components in the enclosure.