May 8, 2017 - The Husqvarna K 1270 and K 1270 Rail comes with the patented X-Torq™ engine that contributes to lower emissions and low fuel consumption without losing power. An unbeatable combination. The K 1270 models will replace all K 1260 models. 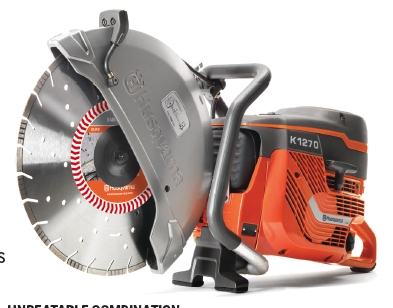 The Husqvarna patented X-Torq™ engine provides a lot of power but is still able to keep both fuel consumption and emissions low. The engine uses air to flush out the cylinder instead of using a fuel-air mixture, which is found on conventional two-stroke engines.

In addition to the new engine, the K 1270 models feature a new magnesium blade guard. The magnesium weighs less than steel, which makes the saw weigh less and improves the power cutter’s power-to-weight ratio. The new guard also rotates to facilitate efficient cutting. As the power cutter moves while cutting, the guard moves to ensure it is at the proper position. The operator does not have to waste time stopping and readjusting the guard.

Digital ignition, which already exists on the K 760 and K 970, has also been added to the K 1270s. Digital ignition improves stability, acceleration and response.

K 1270 Rail
The K 1270 Rail is a speciality power cutter used by rail workers to cut rails in maintenance work on train, tram and underground rail systems. In addition to the X-Torq™ engine and digital ignition, the rail saw is also equipped with double attachment mountings to allow the rail attachment to on either side of the saw.