Employing a multi-faceted strategy for success and honing it each year: that’s how Prairieland Rental and Sales continues to thrive alongside its independent peers across Canada. 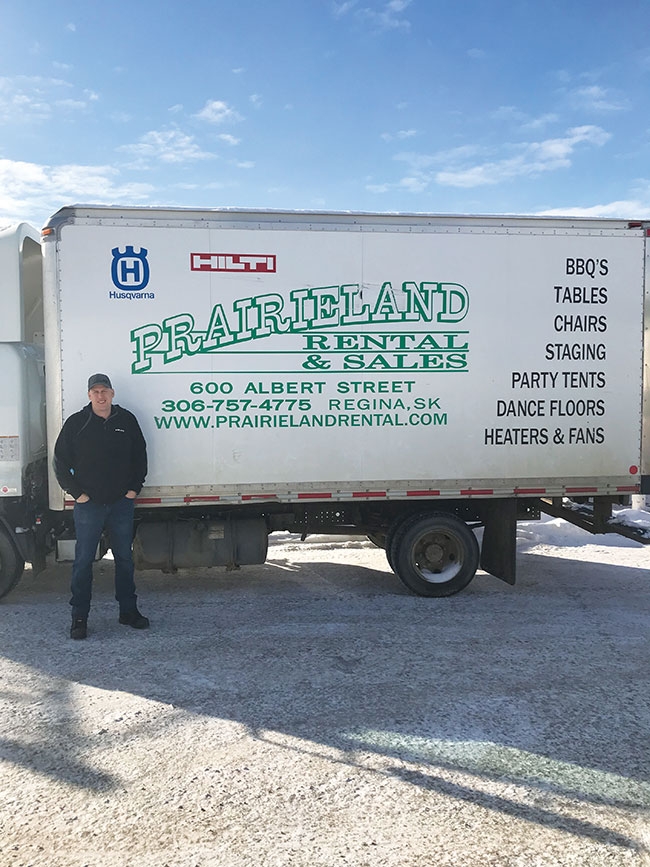 Prairieland has rented out tools, equipment and event supplies in Regina since 1986. “It started as a small general tool and equipment store catering to the home owner ‘do-it-yourselfer,’” explains president, Jeremy Andrews. “My dad, Keith, purchased the business in 1998 and I helped out on weekends while I was going to school and I also worked for the previous owner as well. I came on board full time later with the intent to transition into ownership over the coming years, but Dad and I are still running the business together and we make decisions together.” Andrews has also served the greater industry as a provincial director on the board of the Canadian Rental Association since early 2017.

Keith had actually purchased the business with a partner in 1998 and it wasn’t until 2009 when he bought the partner out that he and Jeremy had a serious talk about Jeremy coming on board and eventually taking over. “I had a good job at the time, but once the opportunity was there it was a no-brainer,” Andrews remembers. “What excited me the most was just the simple idea of working for myself. There’s nothing like working for yourself. The stress and responsibility is worth it, because you get to make the decisions.”

One big challenge Prairieland faced in its early years was the arrival of Home Depot. From the start, Keith had begun branching out into event rentals, but in the early 2000s when that big player came to town, he really put a focus on it. “The arrival of Home Depot was a major shock to the system,” says Andrews. “More tent and table-and-chair rentals was a good way to try to pick up that lost revenue. Dad started advertising, word-of-mouth spread and he was able to pick up another event or two every year.”

A big break came in 2005 when Prairieland formed a partnership with the big country music festival Country Thunder, formerly called the Craven Country Jamboree. Prairieland had to quickly buy a lot more tents, tables and chairs to cover the event’s needs and that’s proven to have been a great investment. Indeed, Andrews says that that event, along with the Regina Folk Festival, have been “vital to our growth and I believe to theirs as well. We’ve witnessed both festivals grow substantially over the past few years.”

Tent rentals were also an opportunity to fill in some of the gaps in event rental within the local market. They’ve also boosted tool rentals at Prairieland to some extent, in Andrews’ view. Event rentals now provide about 25 per cent of Prairieland’s current revenue. “About 60 per cent of our event business is festivals and yearly events like fundraising walks and the other 40 is weddings and corporate functions,” Andrews explains. “We don’t do plates and cutlery, and we only have a few linens. We may do plates and such in the future, but we’re just not there yet. We don’t have the facilities to store it all and wash it all. We’d almost have to have a separate business for all of that. So, it’s a big decision.”

Until then, Prairieland will continue to offer the great personal service with event rentals that it offers in all other aspects of the business. Andrews himself or a staff member, for example, will drive a table or two out to a home where a wedding is about to take place and the family has realized they are a table or two short. Last year, at Country Thunder, the Snow Birds were scheduled to perform and the organizers needed a marker that the pilots could easily locate. The organizers asked Prairieland to take a large white tent up to the top of a nearby hill and spread it out. Unfortunately, there was no way to drive the tent up there and, despite the weight, Andrews and one of his employees carried it up themselves. The Snow Birds found their mark and Andrews was there to see them later.

Countering the competition
Back when his father bought the business, there were a few other small rental stores in the area as well as a few of the bigger guys, but of course, that’s changed. “Nowadays, there are more of the national companies in Regina,” Andrews says. “It’s hard to say how much of an effect that’s had on the bottom line, because there’s also been a slowing of the economy compared to about four or five years ago. There’s also been an increase in competition in our market due to acquisitions and consolidation of major players. It seems that there’s a new player every few months, with some places just renting out certain types of things. In addition, about 10 years ago, some of the bigger dealerships started renting their equipment out and now everyone does it. It’s tough. You just try to make sure to provide great customer service and ensure repeat business. We don’t really match rates, as it’s a no-win game.”

On the bright side, over the years Prairieland has definitely seen an increase in contractor rentals compared to the early years of the business and that’s been good for revenue. Andrews says there just aren’t as many do-it-yourselfers out there. People value their time, and they’d rather pay someone to do various tasks.

In addition, Andrews says, “We’re trying to grow the construction sector side of the business. That’s where the biggest margins are, so we’re focusing on having more to offer. Over the years we’ve added bigger construction equipment like excavators, skid steers and generators and we’re now looking to add bigger compaction equipment, trench rollers and ride-on rollers, things like bigger air compressors.”

To keep and grow his customer base, Andrews also thinks social media, in addition to radio and newspaper ads, is a marketing tool that Prairieland needs to put more effort into. “We’ve got to find a way to get posts up, ideally one every day or get someone outside to do it,” he says. “I think it will end up being the latter, as it’s important to do it when we’re at our busiest times of year and that’s really tough for us to do. We need to post about new products and equipment and about the events that we help make happen.”

Though the company turns 33 this year

Labour
To keep their employees happy, Andrews and his father have always tried to create a comfortable and family-friendly work environment. They are always sure to have a welcoming presence for employees’ families when they visit and to offer things like good benefit packages. They have long-term year-round employees and Andrews says it’s not hard to get seasonal staff, with some youngsters coming back over two to three years.

Keeping staff busy in winters is eased because Prairieland is an authorized dealer for both Hilti and Husqvarna (chainsaws, weed eaters, lawn mowers, snow throwers, zero-turn tractors, garden tractors and much more). “Parts and service is now about 25 per cent of our business,” says Andrews. “We do repairs for these brands and other brands too. There are not as many places doing repairs as there used to be.”

A lasting legacy
Like others within a family business, Andrews has always valued the chance to work with a parent. “I’ve learned many things from my dad,” he says. “He always took his responsibilities to his employees and their families seriously. He never missed a pay period or missed paying a bill. I’ve also learned organizational skills from him and of course, just how to operate the business day to day.”

Another thing Andrews has learned from Keith is simply what it takes to run a family business: to work hard, but also to pace yourself. “At the time when Dad started, he spent a lot more time than even I have to,” Andrews says. “He had less staff. He just couldn’t afford more. He spent a lot of time here. But he also taught me how to deal with stress, just making sure that you get away here and there when you can, when you have the time. You need a break here and there.”

Andrews also learned from his father that customer service is the most important factor in success. They both believe that if you don’t offer that, you will surely lose customers. People come in to Prairieland, Andrews says, because they know him and his father and their staff, and Prairieland knows them by name.

“I am still learning from my Dad, always, and I always will,” he says. “Right when you think you have something figured out yourself, or that you are right and he’s not, the next day or maybe six months later, you realize he was probably right. I’m very thankful of the opportunities that Dad has given me. Without him, I would never be in the position I am in today.”