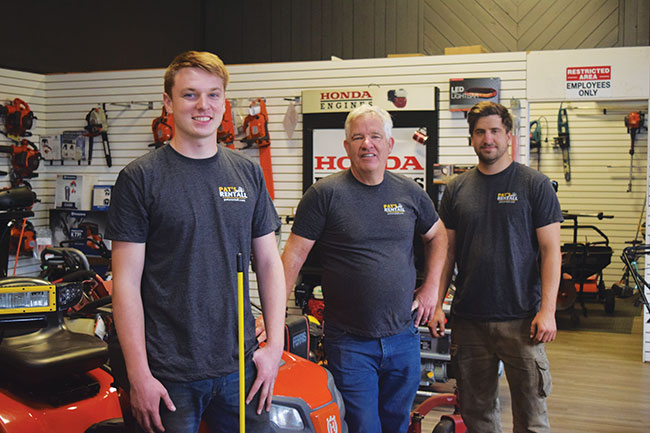 Don (centre) is proud of the young talent he has involved at Pat’s Rent-All. His son, Joel, (right) is already taking over many of the day-to-day tasks. Micah Tudhope works at the store full-time, as well. All Photos: Courtesy of Pat’s Rent-All staff.

There are many beginnings to the story of Pat’s Rent-All. The first takes place in fall, 1969, when Pat’s Rent-All was established. At the time, the rental company called 800 square feet on Harwood Ave. in Ajax, Ont., home.

Nearly a decade later, in 1977, Pat’s outgrew that space and moved into 1,400 square feet on the same road. Finally, in 1988, Patrick Dunne, the then-owner and namesake of Pat’s Rent-All, moved his heavy equipment rental company to a 3,300-square-foot shop on Westney Rd., just over three kilometres north of Harwood Ave.

When Sean Dunne, Pat’s son, decided it was time to sell the business, he consulted his friend, Donald Towns.

With a bit of hope and some cash, Towns became the owner of Pat’s Rent-All in 2012. It was Towns’ rental-industry beginning.

Know your customers
With his purchase he inherited a small shop with three Bobcats. “I think they were MT52s: one small skid steer on wheels and an excavator.”

Ten years later, Towns has grown the business from its humble beginnings – a general equipment-rental store with some compact equipment – into a rental company focused on serving homeowners, landscapers and the contractor markets. He found that’s what worked in his region.

Serving towns in southern Ontario like Ajax, Whitby, Oshawa and Pickering can be tough as a small rental company because of the number of big-name rental companies that dominate the market.

“I knew we couldn’t compete with them and I didn’t want to.”

Towns took the aspects of the rental store that were working – like the equipment for landscapers and the small-engine repairs – and built out Pat’s repertoire. He says there was a long period of upgrading to fit the new niche he was trying to build.

“We really homed in on the homeowner market and the small contractors. The industry was different 12, 15 years ago and a lot of what the Dunnes were renting back then were those smaller rentals.”

Fleet upgrade
When he first purchased Pat’s, customers were still coming in to rent equipment like power tools, but those became affordable for the average contractor. He knew he needed to invest in bigger equipment that was still too expensive for his customers to purchase.

Over ten years, Towns added more excavators, skid-steers and lawn and garden equipment to the fleet. He purchased 14 three-foot MT85s from Bobcat and Barreto stump grinders. He built on relationships with suppliers to build his stock.

“We’ve been aggressively buying Bobcat equipment and the Barreto stump grinders and rototillers. We keep buying that stuff because it rents well and there’s money to be made there. I also knew that to survive I’d need to diversify,” says Towns.

Diversifying for Towns meant many things. He built up the company’s repairs sector, expanded their retail section and found creative ways to use the equipment he had in-stock. In terms of repairs, Towns estimates that makes up about 30 percent of his business.

“The previous owner did very little retail and repairs. I thought it was a good way to make more income. My son, Joel, is also quite good at the repairs.”

Customers will often come in for repairs of their landscaping equipment and tools. Towns also began selling snowplows and repairing them.

“The winters can be harsh in this industry, so it was a good way to continue serving my customers.” 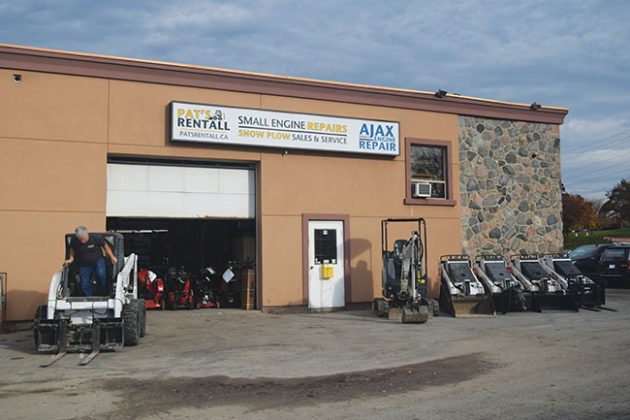 Towns took a risk when he purchased Pat’s Rent-All. He had no experience in the heavy equipment rental industry, but his entrepreneurial spirit helped him grow the company.

New markets
“I’d say we’ve grown four times the size that we were when I first bought the company.”

Part of that growth, he says, was expanding his fleet of cordless and eco-powered equipment for landscapers, something that he says is a growing demand in his community. The owner of a company in the area was retiring and Towns seized the opportunity to be Ajax’s retailer of Ego Power Tools.

“The landscapers seem to love the cordless equipment. There seems to be a growing demand for electric-powered equipment, so when the gentleman was retiring around seven months ago, I jumped on the opportunity.”

Besides the small equipment, Pat’s began working with Penske to rent trucks.

“Penske approached us about four years ago in 2018, and it’s been very, very good for the business. I think COVID helped in the sense that people were stuck at home, buying houses and upgrading their digs, and to do that, they needed the trucks, and they needed the equipment.”

When Towns was first approached, he says he was apprehensive, but he quickly saw how good the deal was. Within those four years, he’s built a symbiotic relationship with the truck rental company, and as he rents more of their trucks, they help bulk up his fleet. The beauty of his deal with Penske is that the company takes care of the trucks and has set Pat’s up for success. Towns found that his sweet spot with truck rentals were the 26-foot carrying trucks. He says he had no need for the larger, commercial trucks, since that’s not the market he serves.

“Joel and I always discuss the changes we want to make here, and in terms of switching things up, you know, you can’t diversify too much because then you become the master of none, you’re not an expert at anything. So, we’re good. We’re paying attention to what works, like the truck rentals and the repairs that we do and we’re getting good at those things.”

Throughout his years in business, Towns has shown his son how to manage the fleet of products as well as the business aspects of the company.

He also started renting garbage bins. The idea came to him from the five-ton truck the company was using to rent equipment. He invested in half a dozen 20-yard- and 12-yard bins for garbage and half a dozen four-yard bins for dirt. He even built a few of the trailers with his experience welding.

Forever a builder
Besides welding, Towns has always had a knack for using his hands. In another life, Towns studied engineering at the University of Toronto. He used that degree to build his own home, a 3,000-square-foot bungalow in southern Ontario, a cabin in B.C., and the house that Andrea Kirkland, his sister-in-law, lives in. “I think it makes a difference that he’s actually a builder himself,” says Kirkland, who works at Pat’s Rent-All. “He’s able to relate to the customers because he’s actually used the equipment and tools.”

One of his biggest projects involved constructing some of the buildings at the Faithway Baptist Church in Ajax, Ont., where he attends church each Sunday and has been the treasurer for 20 years. His family has been involved in the church since a time that there were only five parishioners. Now the church has grown to six acres and around 400 people join the service every Sunday.

Micah Tudhope, a young worker at Pat’s also comes from the church that Towns attends. He is one of the four full-time staff who works at Pat’s. Kirkland handles the administration and front desk at the store. Kirkland’s brother, Ken, also repairs small engines at the shop along with Al MacKay, a licensed mechanic. 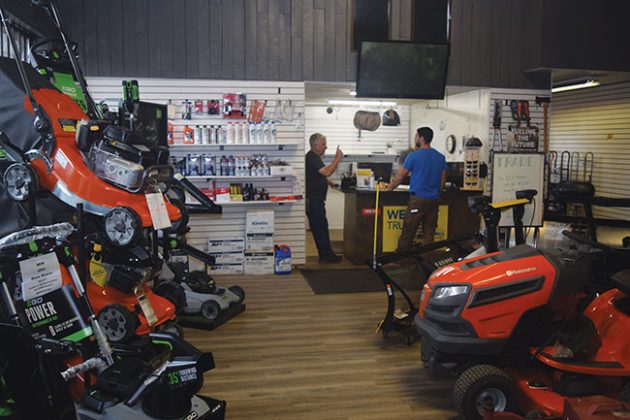 In the 10 years that Don and Joel Towns have owned Pat’s, they’ve diversified their offering of retail products and rental options to grow the company to four times what it was.

Down the family line
Since the stores beginning, Pat’s has been handed down from father to son to father to son. Patrick Dunne first created the company in 1969, and later passed the business on to his son, Sean, who sold it to Towns in 2012. Now Towns plans on following in Pat’s Rent-All tradition and is preparing the shop, and his son, for a change of hands. Joel Towns, Donald’s son, is working toward taking over the business. “He’s now handling most of the decisions here. That’s part of the reason I’ve slowed down on trying to expand aggressively. It’s now up to him,” says Towns.

Even though he’s passing on more responsibility to Joel, Towns doesn’t think he’ll ever stop working. “I certainly don’t plan on expanding the empire anymore. That’s now up to Joel, but I’ll probably work here until the end. I’m just not the type of guy to stay home. I think that once you have that entrepreneurial spirit, it’s hard not to wake up every morning and come see what’s happening in the shop or want to talk business.”

Passing on the baton to Joel has let Towns do more of what he loves: travelling. “My wife and I are going to Rome for a few days and then we’re catching a cruise on the Royal Caribbean for a few weeks. In December, I’ll go out to my cabin, visit my other son, and do some work that I started there.”

He has two other sons: Jon who owns his own roofing business (Mannheim Roofing) which shares the lot with Pat’s in Ajax; Joshua, who’s a pastor in B.C.; and a daughter, Joanna, who’s an accountant. His eight grandchildren keep him busy as well. “I’m proud of all my children. I’m glad to see Joel’s taken to the job so well, because now I can take vacations like the one that I’ve got planned for Rome next week,” chuckles Towns.

Related
Contractors expect to increase rental activity: ARA survey
What to consider when getting into the aerial rental market
A Place for Everything – A-Z Rental Centre in Waterloo, Ont.
Simplex Equipment Rental Installs Point of Rental Elite Software