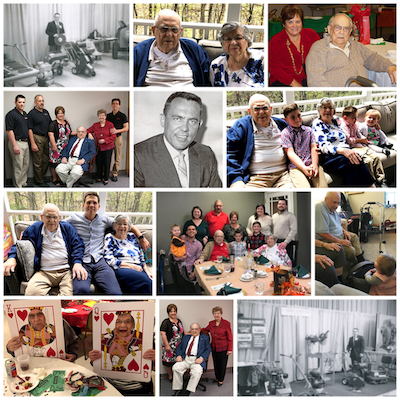 Leo, whose given last name was Swantkowski, was born in Poland before immigrating to the United States when he was two. After his family settled in Pennsylvania, Leo lived a life filled with service, selflessness and a sustained passion for everything he did.

After graduating high school, Leo served in the United States Navy during World War II. Following his service, Leo worked for the National Cash Register company before accepting a job at Rental Tool and Equipment in Silver Spring, Maryland, to work alongside John Doran Sr. and Ed Harding.

While working at that rental store, Leo found that customers were repeatedly seeking a machine for resurfacing concrete, especially large areas. Ed and Leo came together to create the first dual-disc concrete grinder in 1959 and create Equipment Development Company.

As the company and product line grew, and EDCO’s influence reached national and international markets, Leo never wavered from his relationship-centric business mindset with his employees and customers. That commitment helped EDCO evolve from a three-man operation into the 100-plus employees it has today, all while still remaining a family-owned business.

When Leo gave his acceptance speech during the 2006 ARA Hall of Fame induction ceremony, he said, “It’s been my good fortune to be associated with the finest people in the world: The owners and operators of equipment rental centers.  I’ve never met a rental person I didn’t like.”

Leo’s insatiable entrepreneurial spirit was apparent throughout his life, as he was involved and interested in every phase of his manufacturing company from assembly to marketing to sales. But when he took time away from work, Leo enjoyed sailing, painting and spending time with his wife of 70 years, Irene, and their family.

Despite the revolutionary concrete grinder that Leo helped create, his legacy isn’t defined by that problem-solving machine. His legacy is defined by the indelible imprint on the lives of his family, EDCO’s employees and his customers, along with the contributions he made to the rental industry as a whole.