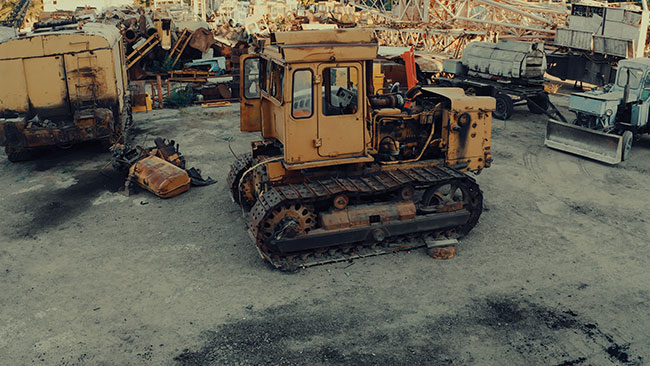 Your degree of success in the equipment rental business depends heavily on your equipment staying in good workable condition for as long as possible. While it is necessary to periodically maintain and repair the mechanical aspects of the equipment – such as engines, motors, brakes, scissor lifts and so on – another critical need that may not initially come to mind, but becomes obvious as the years progress, is rust prevention.

Over time, rust can take its toll on the bodies, electrical components and fuel tanks of your rental equipment. This is a natural process of life as metal components are exposed to moisture, air, fluctuating temperatures and humidity and other corrosive conditions. Equipment stored outdoors or in coastal conditions are especially at risk, as are rental vehicles that have to pass over winter roads treated with deicing salts. Rental loading equipment that has to handle corrosive compounds like deicing salts or fertilizer also faces a higher risk of corrosion. Exposure to these conditions accelerates corrosion on equipment, shortening their useful lifespans and leading to a “payday” when rust forces you to pay your corrosion debt by repairing or retiring your previously valuable equipment.

The good news is that taking simple strategic measures to deter corrosion on rental equipment can go a long way toward extending service life and getting the maximum profits out of your rentals. The most comprehensive approaches will take into account external body protection as well as protection of internal fuel tanks and electrical components. Fortunately, there are many things that can be done through the use of coatings, regular washing, VCI emitters and fuel additives.

Coatings and cleaners
The most obvious need for corrosion protection is on rental equipment bodies. Alas, the original coatings never last forever and eventually begin to bubble and chip away to reveal rusty patches that may one day turn into holes. Rental companies storing heavy equipment in seaside conditions will notice this especially fast and can particularly benefit from applying a corrosion-inhibiting permanent or temporary coating right over the original equipment paint. By using a clear coating or one tinted to match the original equipment colour, changes in appearance can be kept to a minimum.

This was true for a heavy equipment dealer on an island in Oceania. The country had hit an economic crisis and the dealer had to store overstock equipment in a yard near the sea. The body paint began to blister and crack over time, and the bare metal corroded in the seaside environment. Conventional paint applied over the damaged areas cracked off in one to two months and the dealer was back where they started with corrosion. At this point, they decided to try a water-based corrosion inhibitor coating called VpCI-386. The coating was colour-matched to the equipment and no further corrosion was found on trial areas upon inspection three months later, leading them to adopt the coating for protection of the full equipment bodies.

The same coating was adopted at a Pacific air force base familiar with similar problems. Due to the humidity and saltwater proximity, vehicles on the base typically had to be repainted within five years of purchase, often in conjunction with extensive corrosion-related body repairs. Because of this, they wanted a way to protect their new multi-million dollar Airfield Damage Repair vehicle fleet from early deterioration while leaving the equipment in a ready-to-use condition at any time without product removal required. One of the solutions was to apply VpCI-386 CMA (clear matte finish) right over the heavy equipment bodies. Although the sergeant in charge was only concerned about corrosion and did not care what colour the coating was, the coating had the advantage of drying clear and unnoticeable over the original paint, while promising to help extend the service life of the fleet and so create a significant monetary savings. VpCI-391, a water-based removable corrosion inhibitor coating that can be cleaned off with an alkaline cleaner but is often left on with minimal change to surface appearance, was sprayed inside the engine compartment, in the wheel wells, and on firewall surfaces. These two coatings were an important part of a plan that addressed practically all aspects of the vehicles – from electrical components to hinges, pintle hooks, grease zerks and forklift tines.

Another interesting example is the experience of a North American barge-loading company that operated in different ports on the Ohio and Mississippi Rivers. After just one year, they would see a drastic change on their fertilizing and deicing salt loading equipment, which was already looking 10 years old. They adopted application of VpCI-391 as part of their annual maintenance plan, cleaning the equipment off with a flash rust inhibiting cleaner (Cortec VpCI-410 series) for good surface prep.

Regular equipment washing
While an extra layer of protective coatings can play a very helpful role in preserving vehicle body life, sometimes the key can be to implement a good washing program. This is evident in the experience of a Metro area department of transportation in the Midwestern U.S., known for severe winters and excessive use of deicing salts. These deicing salts were taking a serious toll on snow plows and deicing trucks, which would come back from a job with chlorides caked in the cracks of the vehicle joints and underbodies. The salt was also being dragged into the cab on the drivers’ boots so that some of the drivers’ seats were at risk of falling through the floors from rust. There were also many other problems with rust deteriorating the vehicle bodies. The department began washing their trucks with a custom version of VpCI-406 after every outing. VpCI-406 is a phosphate-free cleaner that is excellent for removing grease, grimes, and salts and also provides flash-corrosion protection. The regular washing made a significant difference on the trucks compared to those that were neglected and allowed to rust over the weekend. This basic maintenance best practice could be easily transferred over to the rental industry for good upkeep of equipment that operates in harsh conditions of one sort or another.

Restoring and preserving fuel tanks
The problem of rusting fuel tanks is another issue to avoid on your rentals, especially so when storage conditions are severe. Here again, the experience of a heavy equipment dealer in Oceania is insightful. After storing heavy equipment near the sea where almost constant winds circulate the corrosive atmosphere, the dealer found that almost all units had fuel tank corrosion. The rust was cleaned out of the tanks first using MCI Super Remover (a low pH biodegradable alternative to phosphoric, muriatic, and nitric acid cleaners) and VpCI-423 (a biobased rust remover). This was followed by a rinse with VpCI-416 flash rust corrosion inhibitor cleaner/degreaser at 10 percent dilution. This pleased the dealer, who was happy to remove the rust quite effectively without the use of mechanical grinding. The tanks were flushed with diesel fuel and a corrosion inhibiting fuel additive was applied for ongoing corrosion protection. VpCI-386 was used for external protection of the tanks and tinted to match the original colour. This allowed the equipment to remain usable while taking precautions against the problem happening again. 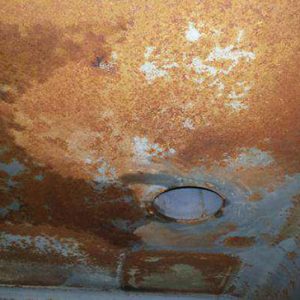 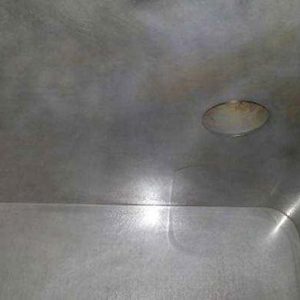 The right combination of washes restores it to like-new.

Protecting Electricals components
While any type of vehicle has electricals and electronics, rental equipment is especially likely to have electrical junction boxes and exposed electrical connections that control lifts, shovels, and other power accessories. These electronics are also vulnerable to corrosion and can be protected in a couple of ways. One easy option is to place small cups of vapour-phase corrosion inhibitors inside the electrical control boxes. These work well in any type of enclosure because they release corrosion-inhibiting vapors that fill the compartment and attach to metal components. This protective molecular layer remains as long as the cabinet is closed and quickly self-replenishes once the panel is re-closed after servicing. Exposed electrical contacts can be protected by spraying them with a light corrosion inhibiting film. These same steps were implemented on the previously mentioned Pacific air force base by adding VpCI-105 and VpCI-111 Emitters to fuse boxes and spraying ElectriCorr VpCI-239 (a dual cleaner/protector) on electrical relays, wiring, electrical motors, battery connections, and electrical components of their ADR fleet.

Choose Your Path to Corrosion Protection
There are even more options that can be helpful for protecting the varied components on rental equipment – corrosion-inhibiting underbody coatings; corrosion-inhibiting greases applied to grease zerks; corrosion-inhibiting all-purpose lubricants for clutch releases, hinges, and other moving parts; and VCI emitters for tool boxes and other enclosed compartments. While a comprehensive plan provides the most protection, you can still benefit by choosing just one or two options to get started. Maybe you’ve noticed more problems with your electrical components and want to begin there. Maybe you want to amp up the corrosion-inhibiting power of your cleaning activities with a flash rust inhibitor wash. Maybe you are ready to add an extra, unnoticeable protective coating on top of the original paint. Whatever the path you take, rest assured that there are practical options available to cut down on rust and extend the service life of your rental fleet so you can make it last longer, maximize your profitability, and push the rust “payday” farther down the road.

About the author
Julie Holmquist is content writer at Cortec Corporation. Visit cortecvci.com for more info.