What’s in a name? If you’re Hamilton Equipment Rental Centre, it means everything. Considered one of southwestern Ontario’s leading rental service centres, HERC Equipment Rentals (as it is legally known in this bustling “Steeltown” burg), is finding itself embroiled in a titanic clash against Hertz. 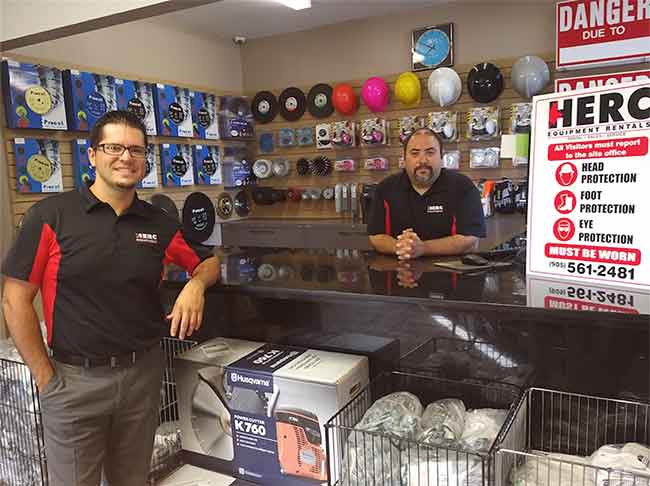 HERC’s Mississauga location has been in operation for two years. Filipe Da Costa (left) is manager of sales and Tony Suozzi is branch manager. Mississauga features more medium-size and towable equipment as opposed to Hamilton’s focus on larger machinery. What’s in a name?

Currently in pre-trial squabbling over trademark infringement, the central issue here is the claim made by both sides to the use of the HERC moniker. The Hamilton firm says it has been using the name since the 1970s; Hertz argues it has owned the title since 1996 in the United States.

For HERC Equipment owner Camille Jagdeo, it’s a classic case of David vs. Goliath. “This is an American giant saying ‘I can afford better lawyers than you so I’m going to squish you,’” she says. “A big American company rolls into town and says ‘I like your name so I’m going to exhaust you until I get it.’” Jadgeo says she feels “truly bullied.”

His feathers unruffled by the legal wrangling, HERC Equipment’s operations manager, Mario Rapino, who has 33-plus years under his workbelt in the construction industry and then the heavy equipment rental business, credits his company’s long-term success to the dedication and product expertise of his team members, who number 15 to 20 depending on the season. “Our guys have years of technical, sales and mechanical experience in this business. They know the products and how to use them. Out of 150 resumes that regularly hit my desk, only one or two may fit our needs.” Everything at HERC Equipment is performed as a team, summed up in the company slogan: to provide exceptional customer-focused service though continuous commitment to offering innovative equipment, environmental standards and employee training. “People in these parts know us, that when we make a promise to our customers, we deliver. We’re proud to boast that we’re an independent operation, not part of a chain, and that we can make decisions and commitments quickly. Our customers like that fact, that we’re nimble and versatile.”

Jagdeo and Rapino have shaped HERC Equipment as a one-stop rental for commercial, industrial and do-it-yourself customers. The company supplies contractors working in residential and commercial construction, as well as new construction, renovation, road construction and civil works. “We rent construction equipment and tools and sell new and used equipment, including safety equipment and building materials,” says Jagdeo. “We also repair all makes and models of equipment, and float equipment throughout Ontario.”

The company’s aggregate division provides mobile rock crushing and screening of recycled concrete and asphalt. Historically, more than half of the aggregates produced by HERC Equipment have been used in the construction of housing, nonresidential buildings, commercial and industrial facilities, as railroad ballast and in non-construction uses including agricultural and various industrial applications.

Prior to Jagdeo purchasing HERC Equipment in 2000, it was a family-run business since the 1970s complete with a well-earned reputation for its product range and services. “We carry on business in the province of Ontario, but we have customers right across the country,” Jagdeo says. “We doubled our heavy equipment fleet in 2009, and expanded in 2011 to provide hydraulic attachments.”

About two years ago, the company added a new Mississauga, Ont., office to serve clients on the western edge of Toronto. The HERC Mississauga location is in the Dixie and 401 area. The location started with one person, Tony Suozzi, with a lot of support from Hamilton. A short while after HERC Mississauga was able to hire a driver and salesperson in Phil DaCosta. Between Phil and Tony, the Mississauga location has over 40 years of rental experience.

The store front and shop is approximately 1,500 square feet which is just large enough to house contractor supplies and the small general tool inventory, The yard outside is quite large and can handle and store all large equipment from 47-ton excavators to small skid steers and towable equipment. The rental fleet in Mississauga is slightly different than the one in Hamilton, It carries more towable and more mid-size construction equipment (skid steers and mini excavators) while the Hamilton location carries larger excavators and large compaction.  Hamilton does support Mississauga’s needs with full access to all heavy equipment.

Mississauga’s customers are typically the small to medium-sized general contractors, thought Suozzi says they have the product and knowledge to serve the bigger contractors in the Toronto market as well. “We deal with diverse customer segments from general contractors, concrete and asphalt contractors,  demolition, infrastructure, landscape, home builders and trades,” Suozzi adds. “Big or small we can take care of them all.”

Jagdeo and Rapino have been a integral part of the success of the Mississauga location, With their determination and drive, they have been able to help with the development and growth of the location. Suozzi says they have been fully supportive of any decisions that have been made or discussed to help the location grow. “Because of experience and understanding of the industry that Phil and I have, they trust our judgement to not only make this branch successful but to also be able to expand in the near future,” Suozzi explains. “This makes our relationship with Camille and Mario more an equal partnership than a boss/employee relationship, where we are free to express our ideas, questions and concerns and make important decisions without hesitation.”

Suozzi says the Mississauga focus must be on customer experience all the time, striving not only to build a customer base but to develop a long-lasting relationship with them as well. “Phil and I believe that this business is still a strong relationship based industry.” Suozzi says. At any time they can be found either on the phone talking to a customer or visiting them on their job site making sure their needs are taken care of.

A Pickering location on the eastern side of Toronto is expected to open in 2017.  Over the next five years, Rapino predicts HERC Equipment will not only open an operation in Calgary, but will launch between 10 and 12 new stores. Its latest real estate acquisition is a 12,000-square-foot plant with maintenance, service and repair buildings sited on 11 acres on the industrial fringe of Hamilton. “That’s how fast we’re growing,” Rapino says.

HERC’s Mississauga location has been in operation for two years. Filipe Da Costa (left) is manager of sales and Tony Suozzi is branch manager. Mississauga features more medium-size and towable equipment as opposed to Hamilton’s focus on larger machinery.

Leveraging its new location near major highways and its large physical expanse to bring new equipment on-site for rental sales, HERC Equipment is seeking out new opportunities. “When we see one with potential we go after it,” emphasizes Rapino. “If the others won’t rent it, we will.” That can-do approach is exemplified by the deal that Hamilton Equipment recently inked with Hammer (headquartered in Italy) to be its North American dealership for its heavy crushers, pulverizers and shears. “Hammer’s DH series of crushers offer hydraulic rotation,” notes Rapino. An integrated hydraulic system allows the crusher’s 360 degrees of continuous rotation in both directions in order to get a quick placement of the claws in nearly any working condition.

As for the claws of the Goliath, in its statement of claim filed in Federal Court in Toronto in March, Hertz System Inc. asked for a court order barring HERC Equipment from using the HERC name. It also wants compensation for profits lost because of “market confusion” creating by the local firm.

Hertz, which didn’t put a dollar figure to the claim, says it has an affiliated American company called Hertz Equipment Rental Corporation and has been using the moniker HERC since the mid-1990s. Hertz also alleges the Hamilton company’s use of the HERC name “was done with the express purpose of trading on the significant goodwill in the HERC Trademarks and to trade on the plaintiff’s business reputation in Canada.”

In its statement of defence, HERC Equipment said it acquired the HERC name in 2000 when it purchased a Hamilton equipment rental business that had been using the name, among others, since the 1970s. Further, the company specifically denies “that its adoption and use of the HERC trademarks in association with its equipment rental business … was made with any intention of trading on any goodwill” associated with Hertz. In its counterclaim, HERC Equipment asked for punitive and special damages for the damage it alleges it has suffered in light of the suit.

“By reason of their conduct, the plaintiff’s have traded on the defendant’s goodwill and reputation, and have deceived and misled the Canadian public as to the source of their business and services,” HERC says in its counterclaim.

“We are prominent in our area with loads of resources at our disposal,” nods Rapino, opining that in his view, few know who Hertz Rental is. “Ask any supplier here who HERC is and they will point to us.” For her part, Jagdeo says the strain of the suit has been a major distraction from trying to run her thriving enterprise. “This has really been a struggle,” she sighs with frustration. “I’m trying to stay focused and operate my business, but I have to stay in this fight to the end.”

For the HERC Equipment team, it remains very much business as usual and the sales force has boots on the ground across Canada to capture ever more customers and markets. Asked what he thinks the consequences might be if his company lost the name game, Rapino shrugs off the notion. “I don’t foresee defeat,” he says with confidence. “The case is now under discussion by the lawyers. If it goes to court, it could be tied up in litigation for years. Is this a thorn in our side? No. Is it a nuisance? Yes.”