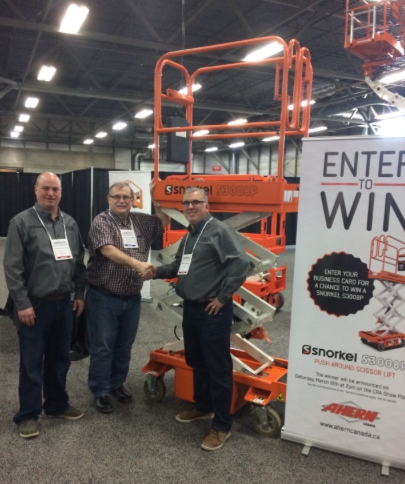 The event started on Friday evening with a hospitality function that included an ample selection of finger foods and adult beverages. A casino night, along with prizes and a silent auction, entertained the crowd that evening. $1,645 was raised for the Doug Mitchell foundation.

The actual trade show was on Saturday at the Edmonton Expo Centre. 49 exhibiting companies filled 120 booth spaces and provided plenty to see for the rental store attendees from across the prairies that attended the event. A lunch time buffet of soup, wraps and drinks was provided to all in attendance. The $1,000 Show Bucks prize that was offered by the CRA was won by Jennifer Myers from Stettler Sales & Rentals from Stettler, AB. The other large prize, a Snorkel S3008P scissor lift that was awarded by Ahern Canada, was won by Brent Fillmore from Legacy Equipment in Edmonton, AB. The show ran until 3:00 and exhibitors reported brisk activity on their booths.

That evening 120 gathered for the dinner banquet back at the DoubleTree hotel. The buffet consisted of salads, chicken and beef along with potatoes, vegetables and a dessert assortment. During the business portion of the evening the following awards were presented:

The entertainment started with a comedian who had the room in stitches with his slightly off-colour humour and concluded with live band karaoke.

The next CRA event will be the Quebexpo event, March 27 & 28 in Drummondville, QC.