Cowden to retire from HammerHead 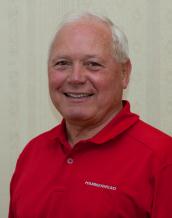 Cowden was previously vice president, sales and marketing at Vermeer, director of business development at Ingersoll Rand, director of
marketing at Ditch Witch,
director of sales at SherrillTree, and marketing representative for
Exxon. He holds a Bachelor of Science and an MBA from Oklahoma State University and
served as a company commander in the U.S. Army. He was also co-founder
and president of Two Rivers Marketing Group.

“Replacing Jarrett’s leadership, experience, and presence will be
challenging. I’ve had the pleasure of working with Jarrett over several
years, in different settings and he’s proven himself as a leader in our
industry, who is well respected, a friend, and mentor with a unique
ability to see well into the future regarding changes in our markets,”
says Brian Metcalf, CEO of HammerHead Trenchless Equipment. “He is a
very innovative and strategic marketing professional. Jarrett will
remain close to the HammerHead family and I look forward to his
continued friendship, support, and mentoring in the coming years.

Replacing Cowden is Paul Rogers, a 39-year-veteran of the
trenchless industry. Jarrett will assist with the transition of sales
responsibilities to Rogers and will focus on special projects until the
end of July.

Rogers is a native of Oklahoma and a 1971 graduate of Oklahoma State
University. Rogers was employed by Charles Machine Works,
the manufacturer of Ditch Witch underground construction equipment, where he
held various positions in both domestic and international marketing
within that organization including director of sales worldwide.

In 1993, he purchased Ditch Witch equipment dealerships for Southern
California. He owned and managed distribution for all of Southern
California until he sold his dealerships in 2003. Rogers has extensive
knowledge in the installation of underground utilities using various
trenchless methods including pipe bursting, pipe ramming and horizontal
directional drilling. For the past two years, Rogers has been the global
accounts manager and western regional sales manager for HammerHead.
Rogers leads the HammerHead sales team with more than 37 years of
experience in the underground construction industry.