How to recommend the right concrete-removal tools. 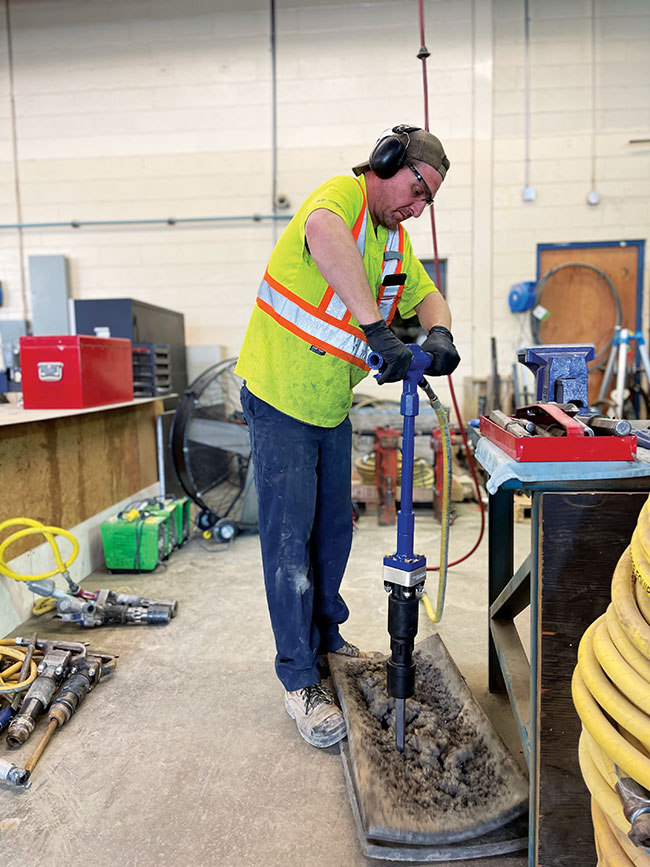 Graham Scott from Cooper Equipment demonstrates how to use a rivet buster with “T”-handle Photo: Daniel Reale-Chin

Highway bridge repair is a multi-billion-dollar industry. This year alone, the government of Ontario committed $3 billion to repair and expand provincial highways and bridges between April 2022 to March 2023.

And that’s just Ontario. With over 51,717 publicly owned bridges in Canada and more than a quarter of urban and rural highway bridges built over 50 years ago, big-ticket bridge rehabilitation projects are inevitable; along with the big-bucks need for rented equipment.

Understanding the regulations
“All government jobs in the U.S. or Canada will specify in the contract the tools and the specifications that are needed on the job. The recommended tool for concrete removal on bridge deck work throughout Canada is a chipping hammer,” says Kniesly.

Ontario’s standard was updated in April 2012 and, like most provinces in Canada, the regulation specifies that for concrete removal on bridge decks all chipping hammers have a maximum weight of nine kilograms (before any handle modifications) and a maximum piston stroke of 102 millimetres. Jack hammers must have a maximum weight of 14 kg and all rig-mounted breakers that use pneumatically driven equipment should produce a maximum energy of 1,000 joules per blow. The Ministry of Transportation also specifies that jack hammers should not be used within 25 millimeters of reinforcing steel that’s to remain in place or within 100 mm of the edges and faces of structural steel that will remain in place. Rig-mounted breakers aren’t permitted within 600 mm from the edge and faces of both structural and reinforcing steel that’s to remain and concrete crushers shouldn’t be used within 300 mm of structural steel to remain in place.

“As a contractor, if all you do is read the specifications that are passed down to you by your foreman, which might only state that the required tool is a chipping hammer, a rental company might provide you with a standard chipping hammer, which will be underpowered and overweight, so you’re actually taking an inferior tool to a job site and you’ll be frustrated with the result. Even worse, you’re not in compliance with the weight limit. So, with a standard chipping hammer, you will not only be subject to fines, you’ll also be completing less work in more time.” says Kniesly.

Safety first
Not using the right tool for concrete removal on bridge decks can have multiple repercussions. Heavier tools used too close to the rebar on decks or within the areas stipulated by the Ministry of Transportation of Ontario, can cause damage to the tools, the bridge and to the people on and around the site.

“I’ve seen issues like that quite often in the U.S. I’ve been to sites where the entire job site was having issues with tools physically breaking in half. When I went to the job site, I saw they were using 30-pound pavement breakers to do the job of a chipping hammer. They were punching through the bridge deck, knocking concrete out from below. Had they used the correct tool, they would not have had the down time, the broken tools or the broken chisels, but more importantly they were punching concrete the size of a small brick through the deck,” says Kniesly.

Using heavier tools in areas not permitted by the regulations can also cause microcracking –small cracks that form in the concrete. Microcracks on bridges caused by concrete removal may not be seen until after the construction, if at all, but can cause lasting damage to the bridge decks. In Canada, the changing seasons might exacerbate the micro-cracks made during bridge deck work. After construction season, rain, snow and sleet might widen those fractures in the bridge and cause things to come falling down.

“The Canadian speculations aren’t being vindictive or trying to make your life difficult. These regulations were written after thousands of bridge re-deck jobs, and the regulators have learned that if you use too heavy of a tool on the top surface of a bridge, it breaks things underneath the bridge,” says Kniesly.

Choosing the right tool
Cliff says many people in the industry might not know about the specification for multiple reasons. Regulations like the MTO’s have existed for decades, but Kniesly says availability and communication might be the biggest issue for industry-workers who might not know about the regulations. He says that good communication may be the greatest remedy.

In response to Ontario’s provincial standard specification and other similar specifications across Canada, some equipment manufacturers have created air-tools with weight, piston stroke and energy specs that comply to the regulators. Tools like the Moto MP-Motoc, which weighs in at 18.5 pounds, carries a four-inch stroke and delivers 1,500 blows per minute and the MP-Motoc-T, which weighs 30 pounds with a four-inch stroke and 1,500 blows per minute, are part of Michigan Pneumatic’s Canadian chipping hammer- and air tool line.

“Those tools were created to comply specifically with the Canadian specifications, which are different from the U.S. regulations. So, customers are getting a tool that meets the MTO’s weight requirements and delivers the power they need to get the job done quickly,” says Kniesly. 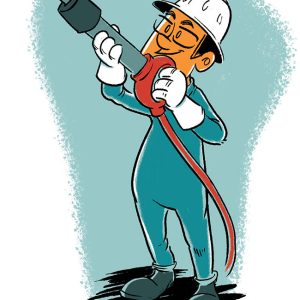 An inside-throttle configuration is better for overhead work to avoid hitting the throttle by accident and causing dry-firing. 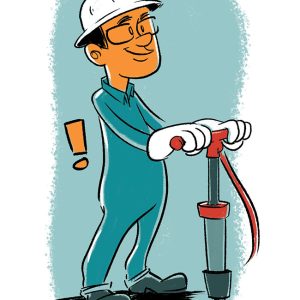 Operating a rivet buster with T-handle saves the worker’s back for floor-level work. All illustrations courtesy of Patrick Tausney, graphic designer 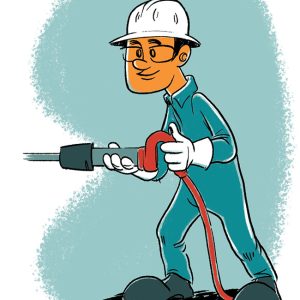 Operating a tool with outside-throttle configuration for horizontal work avoids dry firing when the worker is leaning into the task.

Direction matters
As for tools, Scott MacKinnon, director of sales for Cooper Equipment Rentals agrees with Kniesly who says that knowing the orientation of the work that’s going to be done is vital to helping customers select the right concrete remover.

Both MacKinnon and Kniesly recommend that contractors working overhead use chipping hammers or rivet busters with inside triggers, while tools with triggers on the outside of the handle are designed for working horizontally and T-bar handles are designed for working down. Choosing the right trigger location depending on the direction you’re working in helps contractors avoid issues like dry-firing that could cause retainer failure, destroy the tool or injure you or the person working next to you.

“When recommending a tool, trigger location is a critical decision. For over-head use, contractors will need air-tools with inside triggers so they can safely rest the handle in the palm of their hand and not be inadvertently resting on the trigger. For working horizontally, using a tool with a trigger on the outside of the handle helps avoid the same problem. When a contractor is working down and at floor-level, a t-handle rivet buster will not help avoid accidentally squeezing the trigger, but also save the workers back. I’ve personally seen the damage that using the wrong tool with the wrong trigger location can do – dry-firing, broken tools, safety, these things can be avoided with the right tools,” says Cliff. He adds, “providing contractors with multiple tools with the proper trigger locations helps save them on cost, safety and productivity.”

Beyond that, MacKinnon recommends that his team goes out to the job site to make the delivery so they can get acquainted with the type of work their clients are doing and so that they can ask the right questions: what orientation are you working in? How many people are going to be chipping? Do you want spare tools?

“Always recommend spare tools. Air tools break frequently, so I always recommend 25 percent more than the job requires because you can avoid so much down time and extra costs by having the right tools,” says MacKinnon.

As for rental stores, MacKinnon recommends that every rental store carry compressors, the proper air tools (including chipping hammers and rivet busters that not only comply to the province’s specifications, but also air tools with various trigger locations), a selection of manifolds, various-sized hoses, sharp steel of various points, chisels and lengths and of course, the proper protective equipment.

“Air tools are temperamental, it’s very important that rental equipment stores have more air tools in reserve than standard rental equipment. I like to make sure that for every air tool that we own, we have a spare,” says Scott.

“It all boils down to communication. There’s multiple layers between the engineer in the office who bid the job, the foremen and then the contractor who is doing the work daily on the bridge deck. These bridge rehabilitation projects can take years and can require multiple visits to and from your equipment-rental company. Knowing your customers work intimately, providing multiple air-tools and spares and communicating with your client will help you help them,” says Cliff.

Related
Editorial: Wellspring of the unexpected
Knowing your market will improve profits
Sullair Showcases Upgraded Portable Air Compressors and Air Tools at The ARA Rental Show
Then and Now: Concrete advice and service/Not set in concrete