Compaction remains one of the main profit centres for any general equipment rental house. It occupies that sweet spot where there is a lot of demand on individual projects, but not so much ongoing demand that it makes sense for a small contractor or homeowner to purchase their own machine. 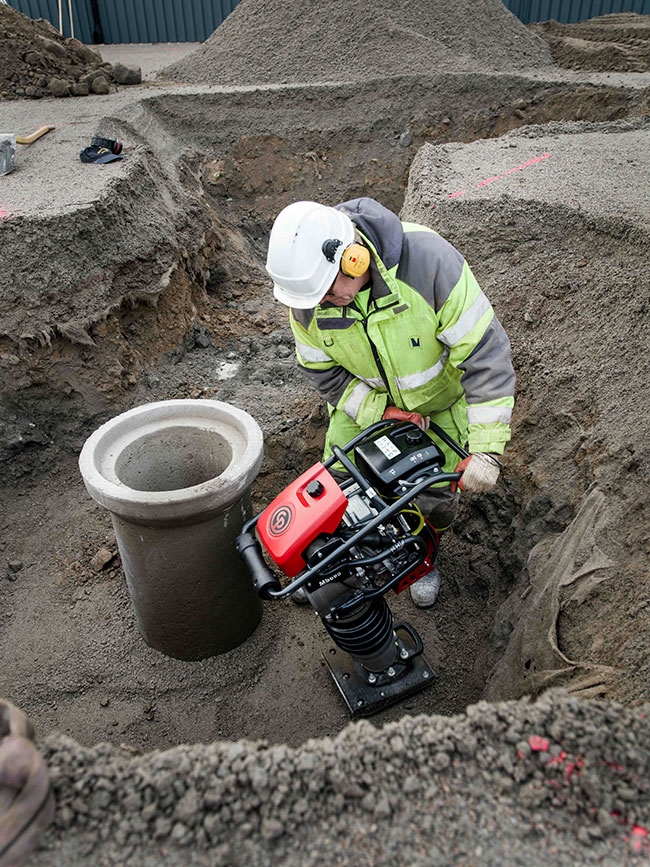 Beyond soil condition Compaction remains one of the main profit centres for any general equipment rental house.

Part of the reason for this is the wide variety of project needs and soil conditions that demand different compaction solutions – a contractor purchasing only a roller, for instance, would find himself with the wrong tool for many of his jobs. That’s why a smart rental operator maintains a varied fleet including all the main types of compaction equipment: rollers, rammers and plate compactors. Applying these machines intelligently to the customer’s needs is one of the great value-added services that a rental house can offer.

With that in mind, here are some tips on soil compaction and how to steer your customers in the right direction.

Why Soil Compaction
Soil compaction is a process that increases the density of the soil. Before we build anything supported on the ground, the soil is the base layer. At one point or another, you have likely driven on a highway or driveway and noticed cracks running across it, or the surface buckled or bulging. That is mainly due to the base of the dirt not being prepared correctly and poorly compacted. It is critical to get this first step right.

Soil compaction does many things, but mainly it increases load-bearing capacity and stability that allows traffic to drive over it, weight to be supported by it, prevents soil settlement and frost damage and reduces water seepage.

Soil and Moisture
First off, it is important to know what kind of soil you are dealing with. Different soil types feature different maximum densities and moisture levels. Cohesive (think clay), granular (think sand), and organic (think potting soil) are the three basic soil groups and only two of the three soil groups are suitable for compaction – cohesive and granular. Cohesive soils have particles that stick together, granular soils crumble easily, while organic soils are not fit to be compacted. Each soil has it’s own unique characteristics from absorbency to compaction difficulty.

It is not only important to determine the soil type, but also the moisture content in the soil before starting to do compaction work. There is a happy medium to discover in terms of moisture in the soil – too much moisture weakens stability, but too little moisture will result in poor compaction. A quick and simple hand test will show the operator what they’re working with. The test requires you to pick up a handful of soil, squeeze it in your hand, and then open your hand and drop the soil. When doing the hand test, you will find the ideal moisture will mould when you squeeze it and break into a few pieces when you drop it (not too many pieces, however). Determining if there is too little or too much moisture in the soil is rather easy. A dry soil will come out powdery and break into fragments when it’s dropped. On the other hand, if the soil leaves moisture in your hand and the mold of the soil remains intact when you drop it, it has too much moisture to be compacted.  The right amount of moisture is important for the foundation. Getting it right will end up saving your customers money in the long run by trimming down the amount of compaction work necessary to get the results they want.

Equipment
Poor compaction could and likely will result in settlement of the soil. This creates future maintenance issues that could have been avoided or, in extreme cases, complete structural failure. Compaction equipment is made for turning the loose soil at the beginning of the job into compacted soil, giving the right soil consistency before laying down asphalt or concrete.

In dealing with small compaction equipment, users need to be aware that the weight of the machine is about one fifth of the compaction force it is putting out. For example, if the user has a 185-pound rammer they are using in an 11-foot by 11-foot area, that rammer is outputting nearly 3,000 pounds of force. You can only imagine what that piece of equipment is going through. While compaction is a critical process for construction, the same can be said for a good compaction maintenance program.

It is important to have a service interval plan in place. Make sure you regularly maintain the equipment. It is important to check the oil, make sure the bolts are tightened and that you or your technician are inspecting the machine with a fine-toothed comb. Compaction is the first step to constructing any kind of structure, so the last thing you want is for your customer to lose time and productivity because the equipment is acting up.

Biggest Mistakes of Compaction
It is not uncommon to see compaction mistakes, even for the most experienced contractor. It is important for customers to take their time through this step and not rush, or it will end up haunting them later. The biggest mistakes typically seen on the job are either overcompaction or undercompaction. Poor compaction can lead to many unwanted results, including cracks in the slab, buckling or bulging, erosion in the foundation and potential pipe leakage and breaks.

Another important tip is to make sure customers are getting the right amount of lift, which is the depth of the soil layer. As they fill in a trench, they want to make sure they put the correct amount of dirt in there and are providing the right amount of compaction force to the area. When the soil becomes more compacted, the impact on the compacting machine has less distance to travel and more energy returns to the machine, making it come off the ground higher. An incorrect lift – one that has too much dirt and is too deep of a layer – will create a loose layer of dirt, resulting in undercompaction.

Nuclear density tests determine the density of the compacted soil using core samples. After laying an asphalt road, for instance, many times you will see road workers bore about a one-inch hole in different areas right through the asphalt into the ground. What they are doing is checking the density in those areas to see if everything remained compacted the way it should be after laying the asphalt on top of it.

In summary, there are many steps and considerations to take into account when renting compaction equipment. The most significant step is to have your compaction equipment regularly serviced. Compaction products work hard and hit the ground with much greater force than their static weight. Soil has a way of being unforgiving – it is important that customers take their time.