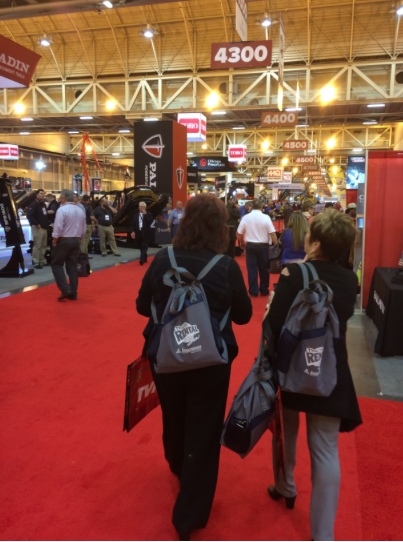 For Canadians, the event started on the Sunday night with the very popular Canadian Rental Association (CRA) Hospitality night. Almost 400 people crowded into the Generations Hall to exchange rental tales and enjoy beverages, finger foods and renew acquaintances. The event was a very successful start to the week’s activities.

The following day, the rental show was officially opened by a keynote presentation by Canadian born Jonathan and Drew Scott, hosts of multiple HGTV series including the Emmy-nominated “Property Brothers,” “Brother vs. Brother” and “Property Brothers at Home.” They mixed humor with some of their life experiences as they told the story of their start and rise to fame in business. Jonathan mentioned, “One of the most valuable things you can do is what you’re doing right now — attending conferences and trade shows where you can meet other professionals in your industry,”. “It’s invaluable. Having a conversation with somebody, even if they’re in another state or another city, I’m telling you the stuff we learn is incredibly invaluable.”

Following the keynote session the show floor, featuring over 700 exhibitors, opened to a steady stream of rental operators looking to upgrade and re-stock their rental fleets. Canadian Rental Service caught up with Jeremy Andrew of Prairieland Rentals & Sales from Regina, SK on the floor and he mentioned he attends the show each year for the socializing and networking opportunity that the show presents. He also compares notes with salesmen from the different companies that he does business with.

On Monday afternoon, the CRA held their annual AGM. Tim Ranson led the meeting which started with Hank McInnis reviewing the past year’s significant activities. John Gillespie from Western Financial Group gave an overview of the CRA self-protected insurance program. He reported that 291 locations are presently using the program and an anticipated 21% return on premiums will be paid back to the members based on the excellent results that the program had in 2017. Mike Maltby of Ingersoll Rent-All was then introduced as the CRA president for the coming year. A number of awards were presented as follows:

The meeting was adjourned and all proceeded to the regional receptions, including Region 10 – Canada, followed.

The trade show continued both Tuesday and Wednesday with brisk buying activity reported on the show floor by exhibitors across the hall. Attandence was reported as 6,047 rental store owners and staff representing 2,657 seperate stores. Total attendance for the event (including suppliers) was 12,066. Plans are already underway for the 2019 edition which will be held in Anaheim, CA from February 17 – 20.