Aug. 6, 2015 - Can-American Enterprises Inc., a Terex distributor, headquartered in Kelliher, Saskatchewan, Canada, has donated the use of its Terex compact construction equipment fleet, including TSV-60 and a TSV-70 skid steer loaders; PT-30, PT-60 and PT-80 compact track loaders; a TC60 excavator; a TH-844C telehandler; and a SKL 873 wheel loader, as well as the fuel needed to run the equipment, to the Birch Lake Restoration Project. The five-acre project site, located ½-mile south of Kelliher, will offer visitors a beach, camping, water sports with a boat launch and docks, play structures, bike and hiking trails and fishing when completed. The lake is currently open to the public for swimming, hiking and some water activities. A grand opening celebration is scheduled for August 22, 2015. 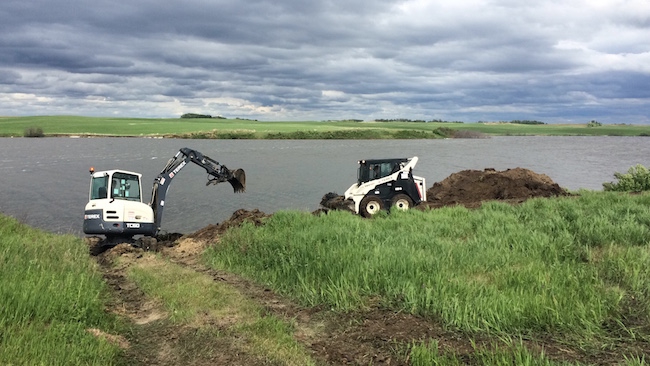 “Birch Lake was a full resort with a dance hall, beach and swimming lessons in the 1950s,” says Can-American Founder and President, Conway Maydonick. “Throughout the years, vandalism has destroyed much of the area and attempts in the past to restore it never gained enough traction and support. In January, community leaders came together and formed a committee to try once again to revitalize this beautiful lake to get it back to the way it once was, and hopefully, make it even better.”

Clean-up and site preparation work began around the lake in early April, and construction work got underway in June. To date, volunteers have completed construction of the hiking trail, the beach, the boat launch and access roads, as well as installed 1,000 ft of fence to separate the public property from private landowners’ property. According to Maydonick, the Terex equipment has been used to complete a variety of tasks throughout the lake property, including moving 400 yd of sand, 50 yd of pit run, 100 yd of crushed gravel, 50 yd of 6-in rock, 50 yd of 2-in rock, 100 yd of crushed rock and 1,000 yd of clay. The use of the Terex equipment was also instrumental in clearing brush from the hiking trail, installing the fence, picking and placing four large dock sections, seeding grass and landscaping.

The Birch Lake Restoration Project is spearheaded by local committee members Conway and Janel Maydonick, Brad Jones, Angela Romanson and Trevor Wenc. According to Conway Maydonick, all materials, supplies, tools and labor needed to complete the restoration project are provided through donations. “This project relies solely on donations of people’s time and money,” says Maydonick. “The response has been tremendous, and we are fortunate to have funded nearly everything we had planned to complete this year. Can-American’s donation of the Terex equipment enabled us to get a lot of work done in a short amount of time, and because of that, people were able to enjoy the lake this summer, which has helped us continue to build excitement and interest for the project.”

According to Maydonick, future plans for the Birch Lake Restoration Project include providing power to the campground, putting in lighting throughout the lake’s amenities, adding play structures and building a floating dock.