[Little Monkeys Rentals is now out of business, according to a message on the company's website. - ed]

Things are sort of bananas at Little Monkey Rentals – the home-based business of Scott Welsman and Jennifer MacLean. The married couple, who live in Saanich, near Victoria, are partners in a business that rents infants’ and children’s gear like car seats, cribs, strollers and even toys. 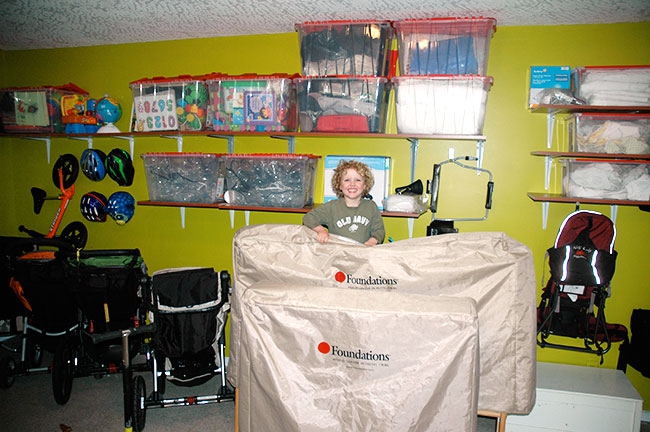 Scott has converted his carport into a mini-warehouse for the Little Monkey baby gear fleet. Daughter Alexandria and son

With spring break winding down and summer holidays approaching, Scott is busy keeping his rental goods squeaky clean as well as gearing up for rental drop-offs – at the airport, ferry terminal or hotels – of must-have items that are typically too difficult for parents to lug around.

Scott and Jennifer, both age 42, didn’t start their careers thinking they’d be in the rental business. Both come from information technology and finance backgrounds, so their shift, in particular Scott’s, to the rental sphere is a little bits and bytes out of character. It was a pre-marriage memory that prompted the couple to jump into the business.

Back in 2001, the couple spent over a year travelling in Australia and Southeast Asia. Beyond the beaches and great food, Scott remembers the excellent customer service they experienced, where staff often went out of their way to meet their needs.

That service ethic stuck with Scott, which is why he can be found driving to the B.C. Ferry Terminal or Victoria International Airport at 11 p.m. with a car seat for a newly-arrived child. If he drives at the speed limit, he can get to the airport in 16 minutes. “Anything I can do to help the people who need our equipment, I’ll try to do it,” Scott says. In fact, it was his desire to have a job with more face-to-face human contact rather than the abstract digital communication he was used to as an IT professional that prompted his career change. “I’m not a typical IT-type guy,” he says.

Originally from Nova Scotia, Scott, who has a commerce degree from Royal Roads University as well as training for Cisco system networking from the University of B.C., does most of the day-to-day operation of Little Monkey Rentals. He’s also a stay-at-home dad for Alexandria, 6, and Lachlan, 3. Jennifer continues to work full-time as the director of technology for Island Health, the local health authority, but she’s also in charge of the company’s web page and public relations efforts.

Having two children of their own and knowing well the stresses that face travelling families were also factors in why the couple entered the rental jungle with Little Monkey. Lachlan loves to try the newest rental toys and is particularly fond of the scooters. Alexandria offers advice on which toys would be best. While the couple’s habit of calling their two children, “little monkeys,” led to the name of their business, Welsman still takes the occasional crank call from a kid asking what kind of monkeys they rent. “I’ll say we have silverbacks, orangutans, spider monkeys…”

LITTLE MONKEY COMES OUT OF ITS CAGE
It was just over one year ago in late January 2014, when Scott and Jennifer began seriously thinking about the business. A friend of Jennifer’s was a contractor for a business that rented baby/child equipment in the Victoria area, but her full-time job meant she didn’t have enough time to devote to the rental sideline. Jennifer and Scott “picked her brain,” did more research and then decided to purchase the equipment. “Neither of us had been in business before. We were a little bit scared,” Welsman recalls.

While the newly purchased strollers, high chairs, cribs and car seats were in good shape and met safety standards, a clean, dry storage area was required, pronto. Welsman went to work converting a ground level room off his home’s carport that had been used to store horse feed by the previous homeowner. After a lot of elbow grease, paint and organization, about $12,000 worth of rental goods had a new home in a space about the size of a large living room. Little Monkey Rentals officially opened in March 2014 and because of demand, more rental products were soon purchased. Since opening, Scott figures they’ve spent about $25,000 on all of their Victoria stock.

Expansion has become a bit of a double-edged sword for Scott. Because Little Monkey is experiencing more demand, new stock has to be purchased, so the current storage space is getting too small. “Now, I’m going to lose my man cave,” Scott says with an ironic smile. His home-theatre room will be showing Baby Bjorn travel cribs, bouncy chairs and baby swings, not the latest Hollywood blockbuster.

Scott has converted his carport into a mini-warehouse for the Little Monkey baby gear fleet. Daughter Alexandria and son

Little Monkey prefers to buy high-end merchandise, such as Britax car seats. They own almost 20 of the convertible models for older children, and five infant car seats. They also own several portable cribs and Baby Bjorn travel cribs. If a customer requests an item not in Little Monkey’s zoo, they’ll sometimes purchase it.

Most goods have been bought at big box stores, other retail outlets or online. But the $300 cost to ship a crib has meant that Scott and Jennifer are investigating wholesale purchasing. It’s important that they buy quality goods at a reasonable price because the lifespan of children’s products, like car seats and cribs, isn’t long. Not only do they wear down, safety standards are ever-evolving and in their business, Scott and Jennifer can’t risk having unsafe rental products.

Right now, Scott is looking forward to the summer holiday season when parents send their kids to the grandparents or families visit Vancouver Island. Living in Victoria, with its many sights and lots of retired grandparents, means that business escalates. “During the summer, we run out of items,” Scott says. Ironically, he’s so busy delivering and cleaning goods, that summer holidays or camping trips for his own little monkeys have vanished. “It’s our busiest season,” he says.

A typical day for Scott is getting the kids up, fed and entertained while Jennifer is at work. Scott then checks his email for queries and reservations. He doesn’t like to make customers wait more than one hour for a reply. He also does a daily read of the Canadian Standards Association and Canada Safety Council websites for safety alerts and to keep abreast of problems. Little Monkey’s Facebook, Twitter and Pinterest sites are also updated. On weekends, the couple may hand out promotional material at events like fairs or farmers’ markets or in select Victoria-area communities like Oak Bay or Broadmead, where plenty of retirees live.

One of Scott’s important jobs is cleaning the rental goods. “It occupies a lot of my time,” he says. His system involves vacuuming every nook and cranny and scrubbing everything down with non-toxic cleaners. The hard-working dishwasher is used to sanitize a lot of the toys and disinfecting spray is also used on items. Recognizing that in some cases it may be difficult for visitors to return perfectly clean goods, Little Monkey can charge customers for excessive cleaning services. But there’s one item that Scott doesn’t bother with. While Little Monkey has had a few requests for kids’ potties, it’s not on the rental list for obvious reasons.

A substantial number of clients hail from Alberta, roughly 80 per cent, Scott says. Most are parents with kids who come to visit grandparents who have retired in the Victoria area. There have been a few European clients and, surprisingly, not that many Americans, but Scott expects that to change with the lower dollar drawing more U.S. tourists to Victoria.

Without a lot of extra money for advertising, word-of-mouth promotion has been beneficial and Scott praises the Used Victoria website where Little Monkey runs a free ad. There’s a competing business in Victoria that rents kids’ goods, but Scott says they help one another, such as when one of them has run out of an item.

LITTLE MONKEY BRANCHES OUT
Last fall, Little Monkey made a move and bought children’s equipment owned by a Nanaimo business, 110 kilometres away, that rented similar products.

So, by Jan. 1, Little Monkey expanded north on Vancouver Island, to Nanaimo, further north to Qualicum (home to lots of retirees) and Parksville (a year-round tourist destination) as well as south to Ladysmith.

Shino Elliott, a mother of five children, runs Little Monkey Rentals in Nanaimo. She owns 75 per cent of the Nanaimo branch and also owns the Nanaimo stock. The remaining 25 per cent of the business is owned by Scott and Jennifer, who primarily handle the advertising and web-based media.

Elliott, who’s active at her children’s schools and has a lot of friends, would often hear the pleas from families who were expecting guests. “They’d be scrambling, looking for car seats and cribs,” she says. When she noticed Welsman’s call for someone to open a Nanaimo branch of Little Monkey, she jumped at the chance.

What has also struck Elliott is the care that Scott and Jennifer put into Little Monkey Rentals. “I’m very impressed with how they are on top of recalls and safety, and know all the expiration dates on the car seats. They’re extremely careful,” she says.

Already, Scott has noticed how Nanaimo differs from Victoria. In Victoria, customers want high-end products and have big expectations. No longer are parents content to have their child sleep in a playpen or use a second-hand stroller. In practical Nanaimo meanwhile, clients are less demanding.

Now, the intentions are for further northward expansion of the Little Monkey brand. Scott and Jennifer have their eye on the Comox-Courtenay communities, which are about 110 kilometres north of Nanaimo. The growing area has a regional airport that continues to add flights to western Canadian destinations. “And there’s a huge population of grandparents there,” Scott adds.

There’s no monkey business at Little Monkey Rentals. “It’s not a business I’ll retire off of, but I get to meet so many people. It’s been a good jump into the small business world,” Scott says.

Related
Baby equipment rental
Atlantic reflections: How it was
Editorial: Doing good is the bottom line
The knowledge you need

2 Comments » for Bringing along baby