Equipment World started with forklifts and now rents it all

Doubling up with a focus on the big and small. 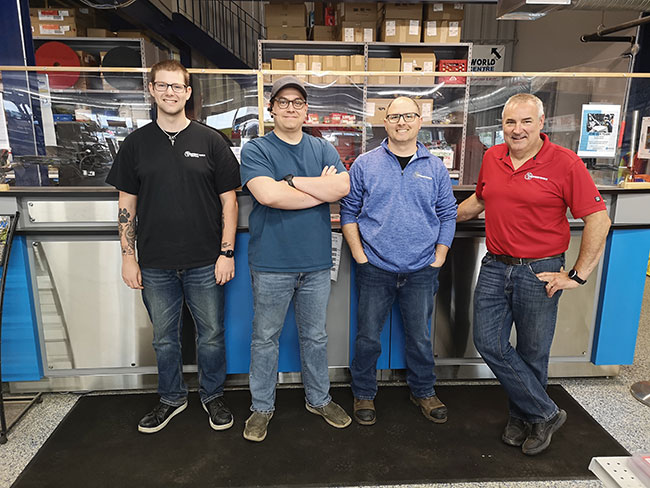 Equipment World offers a full tour of one of its three locations so customers can view the company’s systems, workstations and staff areas. All photos courtesy of Corey Bolton, Equipment World

Doubled business over the last five years in rentals and all other departments – that’s the recent history of Thunder Bay-based Equipment World, which dove full force into rentals in 2017.

For a look at the company’s early history, however, we must go back to 1973 and business partners Peter Knudsen and James W. (Jim) Sutton. “They started up with a focus on materials handling, shelving and racking and shipping supplies like steel strapping and dunnage equipment, and a full range of related industrial products,” explains Lyle Knudsen, president of Equipment World, and Peter’s son.

“Their main customers were in pulp and paper and mining,” he says. “Pulp and paper has really retracted over the years, from over a dozen mills in the 1970’s in northern Ontario to three or four now, but mining has continued to grow. Over the years, in order to fuel our growth, we started serving other sectors such as commercial, contractors and municipalities. First Nations and remote communities also became an important market.”

Equipment World started selling (and occasionally renting) forklifts in the ‘70s – and in fact, it became the second-oldest Toyota forklift dealer in Canada in 1976. At that point Lyle was a youngster, but he remembers with a smile that during elementary school, when he had to do a project about his future career, he chose forklift salesman.

After high school, he attended Confederation College in Thunder Bay for business and marketing, then worked three years as a sales representative for a national industrial rubber-products company. “It was a great opportunity to gain experience outside the family business,” Lyle says. “It really expanded my thinking in terms of what was possible for what was our fairly small family business at the time. I also was meeting customers and making relationships that I would be continuing on with later when I joined Equipment World.”

That came in 1987. Lyle started at Equipment World as a territory sales rep, one of about 10 employees at the time. “Equipment World wanted to expand and there was a need for my skills to do that, and at the same time, Jim was ready to start looking at retirement,” says Lyle. “It was great to work with him during that time, and to be mentored by not only my dad but also someone who was not my dad, and learn from both sets of skills and experience.”

In his first year, Lyle spent a lot of time in the Sudbury area building customer networks. A year later in 1988, they opened the Sudbury branch. In 1990, they opened a branch in Sault Ste. Marie and, that same year, Lyle offered Jim a leveraged buyout over five years.

In addition to expansion through these new branches, Equipment World also started selling and renting aerial lift equipment. It also became the Bobcat dealer for the Thunder Bay and Sault Ste. Marie area. 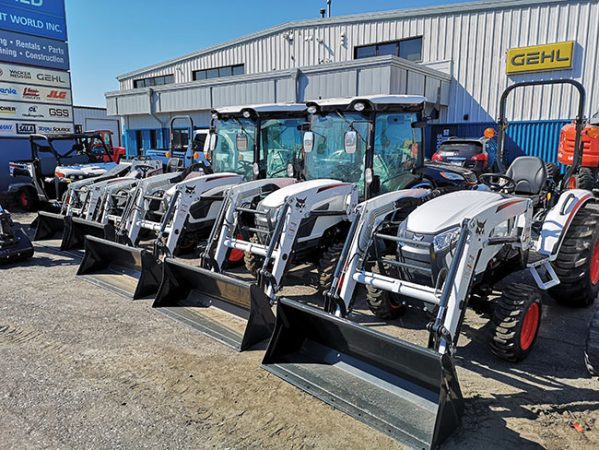 The fleet of major equipment is equipped with GPS and updated rental software to provide greater efficiency, fleet management and customer service.

Rental decision
There was a big growth spurt for Equipment World in 2017, when the owner of a local rental firm called A-Z Rentals wanted to sell.

“He rented smaller equipment and tools and also event rentals, and we were focused on the larger equipment, so there wasn’t much overlap,” says Lyle. “There was also a 26,000-square-foot building which would allow us to amalgamate the three locations in Thunder Bay where we had equipment. In addition, we were able at that point to purchase a vacant lot next door to A-Z that was really attractive: a corner lot with high visibility that we could use for larger equipment. We currently have hundreds of pieces of lift, compact construction, heater, power generation and general equipment for rent. And so we dove fully into rentals for everyone from industry customers but now also contractors, homeowners and events, and branded that division Equipment World Rentals.”

Over 18 months, Equipment World completely renovated its new building and added a full training centre for operation of forklifts, aerial lifts, working-at-heights and a full host of other industrial training (which is also offered at customers’ sites).

However, there was much more to that renovation than initially meets the eye.

Building as showcase
The building in Thunder Bay, and the buildings at the other two Equipment World locations, are a critical way to showcase the various building systems that Equipment World sells and services to potential customers.

That is, on a regular basis, a customer gets a tour of one of the three locations to view systems like loading docks (dock levelers, high-speed doors, door seals), shelving systems, workstations, exhaust ventilation, parts washers, locker rooms, other staff areas and much, much more.

This is innovative in itself, but the buildings also showcase another very important part of Equipment World – its design, build and installation capabilities for conventional and specialty interior construction and renovation projects. This is better known as the Tech Division.

“In the ‘80s, we expanded from shelving and material handling to other building interior systems,” says Lyle, “and at this point we began assisting customers and contractors in the design of building interiors, warehouses, loading areas and other construction specialities. One thing led to another and now it’s one of our strengths. We have full AutoCAD capabilities, with full-time designers and installers at all three locations and hundreds of projects completed in any given year. Examples of specialty projects include lockers rooms and mine dry installations; gun storage for law enforcement; and storage systems in offices, art galleries and museums.” 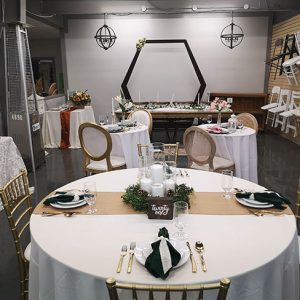 Equipment World has full AutoCAD capabilities, full-time designers and installers at all three locations to help customers and contractors with their design needs. 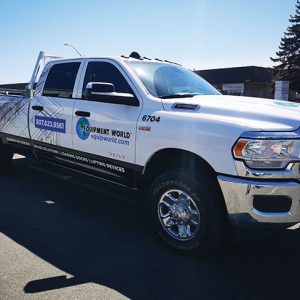 With a fleet of 25 mobile-service vans Equipment World provides remote service to its contractors from the Manitoba border to Quebec.

This means, Lyle adds, that Equipment World partners with the general contractors for interior building design but also rents equipment to the contractors during building construction (and services their equipment). “We’re a one-stop shop in that way and we also do mobile servicing with 25 mobile service vans, from the Manitoba border to the Quebec border, a little into northern Quebec and south to Parry Sound, Ont., – everything from preventative maintenance to complete overhauls,” says Lyle. “In terms of the service department, in a sense, we are our own largest customer based on the number of units in our own rental fleet. We have 25 mechanics, 125 employees in total.”

It’s not easy to get mechanics – in order to expand and also cover upcoming retirements – but Equipment World is seeing some success at recruitment this year through using social media, radio and other methods.

Rentals is growing aggressively as a division and is quickly becoming the largest part of the firm’s overall revenue stream. Other Equipment World revenues come from parts and service, the tech division and training, with the remainder in safety, packaging and industrial supply.

The state of the supply chain is also making it tough right now to expand, and Equipment World has ordered hundreds of pieces of larger equipment that are expected to arrive in 2023 and maybe even into 2024. Freight has also tripled in cost. Fuel taxes is one factor, but since COVID there are now fewer companies doing cross-border shipments, and so they can charge more.

COVID had benefits, however. The decision to get into small equipment and tool rentals (in the A-Z purchase of 2017) proved a good one, with everyone being at home and wanting to renovate or build a deck. But Lyle says even event rentals proceeded well in 2021 with smaller events that met restrictions. This year, with large events permissible, they are booked solid every weekend with eight to 10 events from weddings to grand openings to charity fundraisers. Lyle’s daughter, Lia, works with her team to keep the Tents and Events division successful and growing. His son, Kai, is the company’s equipment manager.

Overall during the last five years, rentals and all other divisions at Equipment World have doubled in size. “It’s been hectic and the rental division, in particular, can sometimes be organized chaos, but we have great people and that’s been a huge part of our success,” says Lyle. “We’ve been looking for the last year or two at the Manitoba market for geographical expansion. I can say that during every step the journey has been very exciting and rewarding and the future looks bright.”

It’s also been very rewarding for Peter, who is now in his early 80s, to see the business continue to grow. “He drops in regularly and is very interested in how we’re doing and he likes to say hi to the crew,” says Lyle. “He loves to golf, drive his motorcycle, spend time in the greenhouse and yard, and travel.”

Lyle has pictures of both his kids on forklifts when they were very small, and someday soon he’s hoping to snap a picture of Lia’s new baby on a forklift too, representing the fourth generation of the family in the equipment business.

“Northern Ontario has been very good to us,” says Lyle. “There are many mining projects coming on line and others will be coming on line soon. This is very positive for us, for the area and for the province.”