June 25, 2019 - It grieves us deeply to announce the passing of Art Moore, the founder of Snorkel, a current Snorkel board member, and a pioneer in the access industry, on June 19, 2019. We have been incredibly fortunate to have been graced with Art's innovative vision, insightful wisdom, whimsical humor and cheerful personality for 94 years. 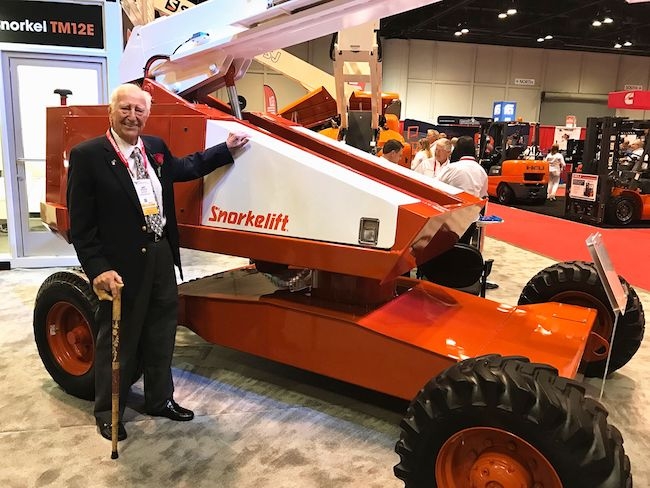 Known for his drive and determination, Art’s career has set an extraordinary example and left a lasting impact on the global work at height industry. His imaginative designs and pursuit for quality helped to shape the industry in its infancy and set standards still followed to present day.

Developing 17 industry-defining models in less than a decade, Art built the foundation for Snorkel, today a leading global manufacturer of aerial lifts. He was probably most well-known for the Snorkel TB-42 telescopic boom which became a standard in the industry for many years, as well as the introduction of the first ‘big boom’ which reached 126 ft. (38m). His vision will continue to influence the company he started 60 years ago and the industry he changed for the better with his innovations.

Over the years, Art’s industry contributions have been recognized with honors like the International Awards for Powered Access Lifetime Achievement Award in 2016, and induction into the American Rental Association’s Hall of Fame in 2017. Following the acquisition of Snorkel by Don Ahern in October 2013, Art became a Snorkel board member providing his global insight and product knowledge.

Don Ahern, said, “For many years, Art Moore was a mentor to myself and others in the early years of the access rental and dealership business, and he ultimately became a close friend. He will be a great miss to Snorkel and the wider industry, and I send my sincere condolences to Sue and family at this difficult time.”

Art’s legacy extends beyond his outstanding achievements in the access industry. He lived for adventure, traveling around the globe, and never shying away from adrenaline with friends and family by his side.