Features Profiles
An entrepreneur to the Kor

A keen eye for opportunity behind Kor Rentals. 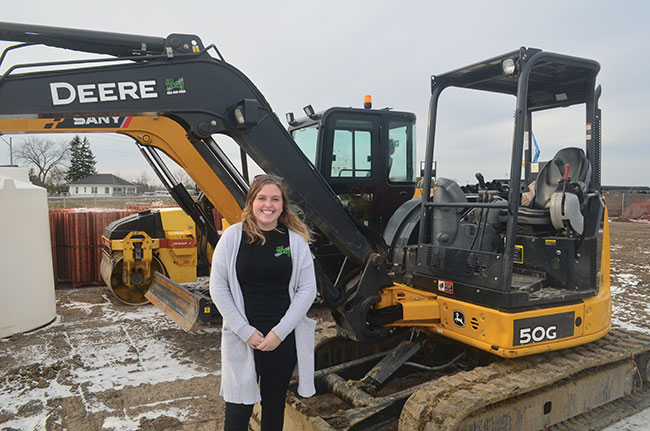 Working in a larger group of companies gives employees like Brittany Tiersma opportunities to bring skills from one shop to another.

To say that Anthony Aantjes keeps himself busy would be the understatement of the year. The owner of Kor Rentals in Wellandport, Ont., wears about as many hats as one can balance on their head.

In addition to owning his equipment rental store servicing the construction sector throughout the Niagara Region, Aantjes owns and operates Anthony’s Excavating Central, a 16-year-old, full-service excavation company, and Ontario Agra Piping and Supplies, a landscape materials, piping and plastic tank supplier he started up five years ago.

It was his workload at Anthony’s Excavating – which has grown over the past 16 years to having 20 full-time employees – that created the opportunity for the creation of Kor Rentals just two-and-a-half years ago.

“Anthony’s Excavating was too busy to do all the work we were getting, so I offered our extra equipment to local farmers to use by the hour, and we grew slowly from there,” Aantjes explains. “Soon after that we set up Kor. I couldn’t keep up with the demand on my own.”

Kor Rentals currently employs four full-time staff and focuses on serving the construction sector. Its current fleet includes over 15 skid steers, about a dozen full-sized and mini-excavators, several haul trucks and backhoes, aerial workplace platforms, as well as other types of heavy equipment.

Getting the company up and running while managing two other companies certainly offered up some challenges. The biggest one was ensuring Kor Rentals had the inventory required to support all the needs of Aantjes’ clients.

“We have learned what machines we need to get more of, so we can fulfill our customers needs,” Aantjes says, adding that his 20 years of experience operating, buying and selling heavy equipment has certainly given him some advantages in working in the equipment rental space. “I have a good advantage to have good equipment bought at the right price, and good guys to fix them to get them to 100 per cent. From there we rent at a good price, but we also have the ability to sell good used rental equipment to our renters or anyone. We are excited for any new businesses and we will buy the equipment that is needed to service our customers. We like the challenge.”

To stay up to date on the latest technologies in the equipment rental industry, as well as for his other two businesses, Aantjes works closely with larger excavation companies, listens to them, and watches for any potential new ideas that could optimize his fleets or his businesses. When something comes up that sounds intriguing, Aantjes and his teams will do their own research to see if something is a good fit for his businesses.

“Being able to help others with their operations, whether Kor Rentals is helping a business, a business owner, or a homeowner” is the goal. “We are so happy to see others succeed,” Aantjes says.

Finding good people
One advantage of having three separate companies is that when you have a good staff member at one of the businesses, they can potentially help out and find new career opportunities at the other ones. This is what happened for Brittney Tiersma, who worked for Anthony’s Excavating for six months right out of graduating Niagara College with a two-year diploma in office administration before joining Kor Rentals over a year ago.

“Anthony asked if I would take this on and I said, ‘Yes,’” Tiersma says during a chat at the rental store. “I do all the invoicing and manage the phones. I really like being personal with the customers. I know a lot of the customers by name.”

Tiersma is still involved with Anthony’s Excavating, which helps her with managing the rental fleet.

“I know which jobs need which types of machines,” she says, explaining that sometimes equipment is shared between the two companies so this information can be vital.

When Aantjes first started up Kor Rentals, he says finding good people that were the right fit to run the store provided some challenges, but now that is a thing of the past.

“We are happy with our staff now,” Aantjes says.

Tiersma says she has always been treated very well at both companies and enjoys the culture there that flows from the top down.

“You aren’t treated like an employee, you’re treated like family,” she says, adding that watching how Aantjes works to grow his companies inspires her to do her part to make Kor Rentals a success. “Seeing that in your boss makes you want to work harder for yourself and help them succeed, because you see them working so hard.”

Anthony Aantjes brings a farmer’s work ethic to his three companies, and relies on staff he treats like family.

Humble beginnings
Starting up three separate companies and having them run successfully is an impressive feat for anyone to accomplish. But in the case of Aantjes, it is especially impressive since he didn’t have any assets to start his first company from. Everything he’s accomplished stems from his strong work ethic and a willingness to branch out on his own and take risks at a young age. His first experience with equipment rental came at the young age of 14, when he saved up $10,000 catching, loading and slaughtering wild turkeys and invested it into a mini-excavator he operated on his parents’ dairy farm in Wellandport.

“I asked Dad, ‘If I buy an old backhoe, would you pay me $8 an hour instead of the $15 per hour from a rental yard?’” Aantjes recalls.

His father knew a deal when he saw one and agreed to rent the equipment from his son, which Aantjes operated on and off the farm for various people in the community.

“Most of the work I got was for snow removal,” Aantjes says.

He says that a strong work ethic, honesty and the importance of treating people fairly were lessons instilled to him at a very young age by his mother and father, and those lessons are big part of why he is succeeding today.

“When I grew up on the farm, you didn’t get handouts,” Aantjes says. “It helps build character and teaches you to work hard.”

In addition to heavier equipment for construction, Kor carries a full selection of lighter machinery useful to any farmer, light contractor or homeowner. Compactors, brush chippers, aerial lifts, concrete saws, generators, lights, pumps and heaters round out the fleet. The company also offers a full-time floating service with several tractor-trailers ready to go.

The Kor offering fits its market. Wellandport is located in Ontario’s Niagara Penninsula region with some of the best farmland in the country. Flat and rural, the area was a famous fruit-growing region before being almost entirely turned over to wineries in the last few decades. Still, there’s significant cash crop farming going on and industry along the Welland canal. St. Catharines is the nearest big city. It used to be a strong manufacturing centre, especially for automotive with General Motors, but most of that is gone now. Instead, housing and commercial development drive what has become almost a bedroom community for Toronto. Kor’s mix of heavy equipment and more portable weekend rentals fits the bill for rural and suburban residents alike.

When asked if he performs any charitable work within the communities he services across the Niagara Region, Aantjes’ answer is characteristically humble.

“Kor Rentals, Ontario Agra and Anthony’s Excavating does, but we believe not to tell others about what we do or how much we give,” he says. “This is between God and us, and He will bless us for giving in secret. We don’t look to others to praise us for our good deeds. We just do the best we can in business and treat others as we would like to be treated.”