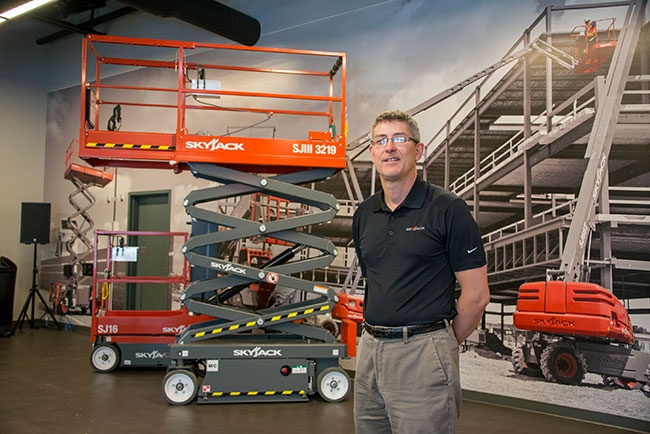 CRS: How are you seeing the global lift market right now?

Boehler: I think the aerial market around the globe and specifically in North America looks pretty good. Our rental customers are telling us that their customers have visibility to work for the next 12 to 18 months and that makes everybody feel good. The American Rental Association here tells us that rental penetration continues to increase and that they see growth for 2019 and beyond, although maybe growth that’s a little less than growth has been in the past few years, but growth nevertheless. So I think all those things kind of tie into optimism. Maybe a little cautious optimism around things like trade and tariffs. I know from our perspective our material costs have increased over the last year because of trade and tariffs, more so because of the supply and demand corrections that come after that as well. But I think if we can stay away from that and if we can stay away from kind of losing our minds over Brexit and losing our minds with the next U.S. election, which people are already talking about then everything should be fine.

CRS: Are safety concerns driving more lift use in sectors that might not have gone there before?

CRS: Have the ANSI changes been challenging for you guys?

Boehler: Very much so. We make a full line of vertical mounts, scissor lifts and booms. We also make a line of telehandlers. Of all of those products, we don’t have to change the telehandlers for ANSI standards, or at least these ones. But every other model has some change to it. So in fact it’s probably the biggest design and manufacturing change we’ve ever gone through. I got questions from one of the journalists here asking if Tier 4 engines the biggest thing we ever went through and how does that compare to the ANSI standards change. Tier 4 engines were easy compared to this because engines are more of a cost-up on the machine and more of a significant factor in one location. You end up redesigning the envelope for the engine and maybe parts for the machine as well, but it is really something you can localize to certain parts of the machine. With this new standard everything on the machine is changing. So, from a manufacturing and design perspective, everything’s changing. From a manufacturing perspective, you’ve got all new jigs, all new fixtures, all new process down production lines. It’s a huge deal.

CRS: The engine changes are not as bad because you aren’t manufacturing the engines yourself. But changes to the load sensing are all you.

CRS: They’ll trip it out.

Boehler: They will trip it out.

Boehler: They’ll get mad and they’ll call and then they’ll swear…

Boehler: That’s right. They will blame us. But you know, ultimately, we’re trying to ensure that the rental companies are prepared and that we are out there educating those end users to tell them, “Look. This is coming. Be ready for it. Your whole thought pattern of the past where we say ‘500 pounds,’ and you say, ‘Well yeah, but there’s some engineer somewhere whose got like a three-times safety factor and it’s really like 1,200 pounds should be fine, right?’ That’s not going to fly.

CRS: You mentioned Brexit briefly. How do you guys get into the U.K. now? Does that go through Europe? Would that change?

Boehler: No, it’s the other way around. Our main distribution hub in Europe is in the U.K. We have distribution centers in Oswestry in the U.K. We have one in France and in Germany and Sweden as well. Wo we are a transporting parts and products into the European marketplace, into those four entities, on a regular basis. Having said that, the vast majority of it goes into the U.K. and through the U.K. and some of it does go from the U.K. to those other satellites as well, as opposed to direct from Canada. So depending on what the terms of Brexit end up being or whether it happens at all we may have to make changes to our distribution throughout Europe

CRS: Might it raise the importance of the French and German areas?

Boehler: It could. We might have to change our model slightly, based on if we end up with duties or tariffs based on importing into the UK and then elsewhere.

CRS: Talk to me a bit about Canada. Maybe go through the regions and tell me where you see the lift business going for you guys.

Boehler: I think Canada’s pretty good actually. I think that the overall economy should still be rocking and rolling. Things are improving out west, although people kind of like to complain about it a lot. But it is gradually getting better. It seems to be getting better. So I was talking to some customers from Quebec yesterday and they said things are just moving and shaking there.

Ontario’s doing pretty well and then things get a little worse as you go out west. I think that’s where we’re at.

CRS: Is B.C. still looking strong for you?

Boehler:  I would say that it’s probably not as vibrant as Quebec or Ontario now but it’s not Alberta either.

CRS: I mean, again, depending on what politically goes on.

Boehler: I don’t have a crystal ball to say what’ll happen but right now, everybody’s doing pretty well. I would say that if they can stop being so partisan in the U.S. and actually put their heads together and get an infrastructure bill across the line – which everybody wants and everybody should want – honestly, I don’t understand why Mr. Trump hasn’t tried to do that already. It should be easy. He shouldn’t be fighting about a wall. You’re supposed to be saying, “Give me billions of dollars for infrastructure,” and everybody will say, “Okay,” and you do it and then that’s the best thing he could for the American economy as far as I’m concerned. And for us as manufacturers is the best thing he could do.

CRS: The automotive stuff like GM will hurt Linamar, probably.

Boehler: It could. I don’t know that there’s been any large Linamar programs that have been affected by anything as of late and I think they’re pretty diversified and frankly, Skyjack is a part of their diversification plan from automotive in the first place and MacDon is another piece of that. So Linamar’s healthy and Linamar wants to continue to be progressive and grow in a variety of other areas as well. So they’ve identified what they want to be in the future. They want to be players in the transportation market, which they are. The industrial market, which we are. The agricultural market, which they’re growing actively right now, but they’re also looking to be in some way, shape or form in the future involved in water, energy and age or medicine, basically. Those are the things they see in the future that they see will drive our economy for quite some time and the kind of things that will grow and that people will need.

CRS: Do you worry about the automotive things affecting the lift side of the business through knock-on effects?

Boehler: Yeah, absolutely. Automotive is one of those areas that’s a big enough sector that when it gets a cold or when it gets the flu we all get the sniffles, right?

CRS: What the direction for SkyJack’s technology going forward?

Boehler: A lot of the presentation at on the booth yesterday was about future technology and where we have a roadmap to being autonomous to a certain extent. I challenged the team to be autonomous by 2020. It could mean a variety of things, but certainly with the machines as they look today, it’s achieving tasks like we showed yesterday: the remote diagnostic check of the machine. It is loading and unloading of machines remotely maybe to start with, but autonomously as a goal. Autonomous mustering in machines, allowing them to daisy chain themselves and go to a staging area or even in a rental yard. The perfect scenario is that the driver comes back with a load of machines and the machines unload themselves into a staging area. While they’re in the back-from-rent staging area the technician looks and says, “Okay, I’m gonna look at such-and-such asset,” presses a button and that asset leaves the staging area and comes to his work cell. They do whatever they’re going to do and then either sends it into the ready-to-rent stage or somewhere else for whatever else needs to happen. I see those kinds of things as happening with our machinery in the next five years, let’s put it that way.

Boehler: It’s that simple. I tell everybody on our staff regardless of what position they’re in, when we get the opportunity to speak to them, we only do two things at Skyjack. We give return on investment to our customers, right, through initial competitive sale price, low cost of ownership and good residual value and then the only thing we do is we’re easy to do business with. So everything that we do is focused around only the customer experience. For anybody customer-facing, you should have one point of contact that you tell your problem to and we get it resolved.

But internally between departments, we have to be easy to do business with each other. It’s with our supply base. It’s with the press. It’s with every interaction that we have and that’s what drives the simple, reliable relationship.