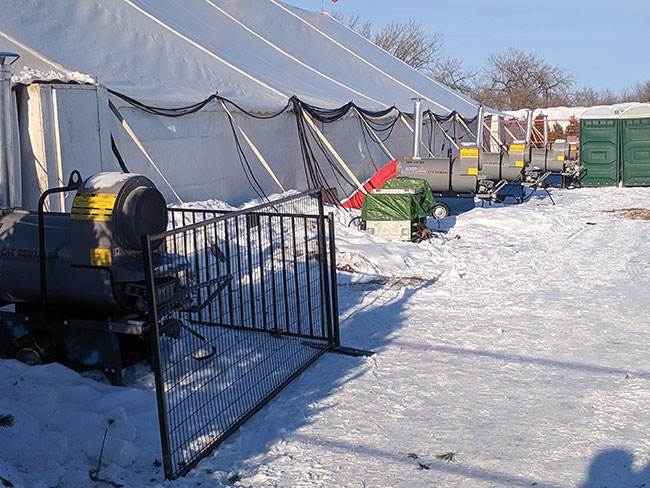 Clearance from buildings, construction materials and other fire hazards gets a big emphasis in the new standards. Preventing loose debris from entering intakes is also important.

CSA recently released the B138.1 and B138.2 standards for installing portable fuel-burning equipment. The stricter standards were created after fires on construction sites at a hospital in Brampton and at the University of Ottawa.

And what kind of issues lead to these types of fires on construction sites? Clearance issues, for one, according to Dustin Hubert of GAL Power Systems.

“If there’s garbage blowing around in the wind and it gets sucked into the intake of your heater, there are safeties in place that should shut the heater down before anything bad can happen,” Hubert says. “But that goes back to your maintenance schedule and your maintenance history on that particular asset. Are you taking good care of it? Was it checked before it went out? Has it been green tagged for this season?”

These types of safety shutdowns are standard across the various manufacturers; otherwise, organizations like CSA or TSSA (in Ontario) would never allow the equipment to operate. Secondary shutdowns, like high-limit switches, are also very common on these types of units; however, weather and time play roles on the degradation of the safety switches manufactured into the equipment.

“These things get beaten up, it’s like a rental car,” Hubert says. “They go down the road, they get rattled around, they’re chucked in and out of trucks, they’re on a construction site and moved around by forklifts – they don’t have a cushy life. It’s very common for simple components to fail, so you’ve got to be checking those components all the time to make sure that you’ve got a unit that’s 100 per cent reliable.”

Proper clearances and operating safety switches are a couple of prime examples of what inspectors will be looking for when they come on a site.

“They’ll look at the gas codes to make sure it’s piped properly, it’s vented properly, and your clearances are all to code as well,” Hubert says, adding that things like clearances for particular equipment can be found in the manual that came with the equipment from that particular manufacturer. “It’s also usually posted right on the heater – it’s hard to miss. It’s like the warning sign on a bottle of Javex. It’s usually right there in your face.” 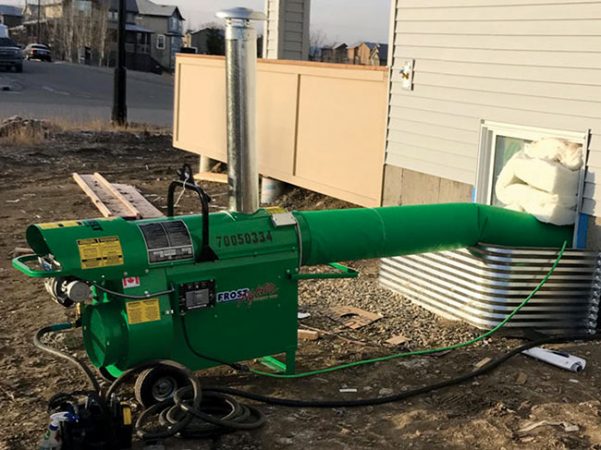 A couple of new standards have come into effect that rental houses across Canada need to be aware of related to portable fuel-burning equipment across Canada.

When hooking up the gas line to a propane or natural gas unit, two common issues are venting issues or the wrong regulator. When it comes to oil-fired appliances, rental houses now need to follow the new CSA 138.1 and CSA 138.2 standards, which Hubert says make things easier for rental houses to operate diesel-burning appliances.

“It’s not specific to heaters, it’s anything that burns oil. It can be a generator, a compressor – anything that holds a certain level of fuel. So what it talks about are what types of hoses you’re allowed to use, what types of connections you have to use and, depending on the site, do you need barricades around your heater and around your fuel cell? If you’re close to water or municipal drains, do you need protection against spills contaminating anything?”

The new standards look at the installation components of oil-fired appliances, such as fuel sources, hoses, fittings and the heater itself, as well as site conditions, which require an on-site evaluation. The CSA has provided a flowchart to help with the process of the evaluation of individual sites.

“That code just came out and is just being adopted,” Hubert says. “TSSA is now looking at it. That code is brand new, CSA just published it last year. And TSSA is now saying that they want the fuel supply companies to enforce it for them. Essentially, that’s what they kind of announced in February is how that how they would be trying to look at that.”

Hubert adds that most aspects of meeting the new standards is simply following best practices, but that traffic protection will be a significant change.

“I think the biggest thing that we’re going to see this year is the traffic protection. That’s brand new,” he says. “We’ve always had to do it, if you’re setting up a propane tank farm – that code is very specific about where and how you can install tanks and what kind of protection you have to have. Now we have, let’s say, a somewhat similar code that surrounds fuel cells. So if you’ve got a 500- or a 1,000-litre tank sitting on a jobsite somewhere feeding an oil burner, there could be a new a whole new set of things that you have to do depending on that particular site. So I think that’s what we’ll see this year… you’ll have a fuel supplier go on to a site to deliver fuel and they’ll just say, ‘No, we’re not doing it because we don’t feel it meets the new CSA code.’”

Proper containment and installation
When it comes to fuel storage for oil-fired equipment, secondary containment is becoming increasing necessary.

“Single-wall tanks have been the norm and are still quite a bit the norm, but secondary containment is becoming a bigger and bigger must,” explains Ernie Haak, manager of engineering for Frost Fighter in Winnipeg. “Those tanks have to be built to a specific standard, which then eliminates the possibility of leakage onto a site or into a building where a fire hazard might be present.”

Without proper fuel containment on a site, a project risks serious delays and shutdowns in the event of a fuel spill.

“It’s not just the remediation costs, you get all sorts of legal issues going on depending on the site, depending on the personnel, depending on the situation,” Haak explains, adding that one piece of equipment leaking on a site can result in the removal of all equipment from a site, potentially putting a project at risk because that equipment is no longer permitted on the site. “You don’t have that issue when you make the equipment have secondary containment on it. That’s the insurance you get.”

When it comes to proper containment of natural gas or propane on a construction site, Haak says installers need to make sure they follow the exact codes for that local jurisdiction. He adds that installers need to make sure the proper protection for the gas lines is in place, such as physical barriers like boards to ensure heavy equipment doesn’t drive over the hoses, cutting gas lines and creating dangerous scenarios.

Daniel Campo of Campo Equipment in Brampton, Ont., says that the most common issue he’s seen related to gas-fired appliances in the equipment rental industry is improper piping installation.

“One of the biggest challenges in the industry is that 99 per cent of [rental houses] don’t have HVAC techs,” he says. “So one of the challenges we have as manufacturers is educating them.”

Campo says people going to sites installing piping incorrectly are a huge issue and a drain on his company’s resources. To help counter this problem, his company offers 24/7 tech support.

Best practices
When it comes to following best practices for installing portable fuel-burning equipment on a jobsite, following the manufacturer’s manual should be a top priority.

“They definitely need to thoroughly read the manuals supplied by the manufacturer, because often what happens is they have equipment like this sitting on a jobsite and they’re unaware of the fuel requirement and the power requirements to be supplied to this equipment. So they either undersize the electrical supply going to it or put insufficient wiring to it,” Haak says, adding that his advice is under the assumption that all manufacturers supply thorough and comprehensive manuals. “We try and do that so that confusion is eliminated. And therefore the confusion with inspectors is eliminated as well.”