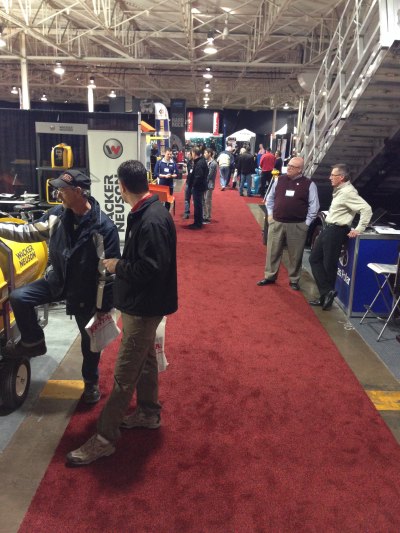 March 25, 2014 - Once again, the Canadian Rental Mart gave exhibitors and attendees a terrific opportunity to shop, learn and build relationships in Toronto on March 18 and 19. Store owners from all over Ontario arrived with a buying focus. While the show recorded a slight drop in numbers (407 attendees representing 194 rental stores) from the 2012 show's record levels, many exhibitors commented on the high quality of the traffic and the high interest in buying versus kicking tires.

March 25, 2014 – Once again, the Canadian Rental Mart gave exhibitors
and attendees a terrific opportunity to shop, learn and build
relationships in Toronto on March 18 and 19. Store owners from all over
Ontario arrived with a buying focus. While the show recorded a slight
drop in numbers (407 attendees representing 194 rental stores) from the
2012 show's record levels, many exhibitors commented on the high quality
of the traffic and the high interest in buying versus kicking tires. The expanded education sessions were well received, with those attending saying those who didn't had missed out. The CRA Ontario banquet was tremendously entertaining, with the Loonie Auction bringing in $1,200 for the association and a lot of laughs and cheers.

A highlight of the first day of the Rental Mart was the presentation of the ROOTY award to Special Event Rentals of Edmonton, Alta., making the ROOTY a truly national award. Darren Kershaw, a partner in the company, made the trip to accept the award and a really big cheque on the booth of sponsor Doosan Portable Power. "This award represents industry recognition of the hard work we have done for years," Kershaw said as he accepted. "There are times in business when you don't know how things are going to turn out, but now we are here and this award says we have done well." You can read the full story of the 2014 ROOTY winner on page 18.

Notable on the show floor was A.E. Sales adding yet more products, including an eye-catching Cormidi man-lift capable of negative elevation to position workers under bridges without blocking the road beneath. The machine was already sold to Ottawa Rentals, who had also bought a Winlet glass lifter. Apparently, Ottawa Rentals is building a specialty machine division to rent unusual equipment for niche applications.

Many Rental Mart attendees seemed extremely enthusiastic to play a putting game located at one of the booths. It may have had something to do with the host of the putting game, who was possibly not one of the exhibitor's regular employees. For those of you who may have missed it, the name of the exhibitor was Tsurumi and they sell pumps. We didn't catch the name of the putting game host, but we're pretty sure we'd recognize her if we saw her again.

John Brooks Construction Equipment was at the Rental Mart, showing off the new logo for the first time at that show since the name change from Uniquip. National sales manager Dave Latour reported good traffic and quality discussions.

Neil Courneya of Hy-Cor must have carried some of the mojo from being a seminar presenter onto the show floor. "We have had one of our best shows ever," Courneya said. "We've been writing orders all day." Hy-Cor sells safety and power distribution equipment, and Courneya presented a seminar on how to add distribution equipment to generator rentals the morning before the show opened.

The other seminars were equally interesting and informative. Lee Doutre of Wacker Neuson gave an in-depth and authoritative look at generator sizing from the perspective of his 38 years in the business. Canadian Rental Service columnist Mark Borkowski collected cards after his talk on how to value your rental business. "I wish I'd known you five years ago," commented Neil De Jong of ITE Rentals in Hamilton, Ont. Rental operators were puzzled when told that Monica Dubbin of Vermeer would present on vacuum excavating, but those who attended her talk were intrigued by the technology and ideas for possible applications flew around the room.

For more photos from the Canadian Rental Mart, visit the Facebook page at facebook.com/CanadianRentalMart.

Check out our video reports from the show floor!

A.E. Sales' Will Stayer talks about their big sale to Ottawa Rentals

Related
A wealth of opportunity
Finalists for ROOTY award announced
Who will win?
All systems go for Canadian Rental Mart