The Rental Show 2017 in Orlando, Fla., wrapped up on March 1 with some exhibitors reporting record sales and almost everyone using the same word to describe the attitude of buyers and sellers at the world’s largest equipment rental-specific trade show and convention — positive. 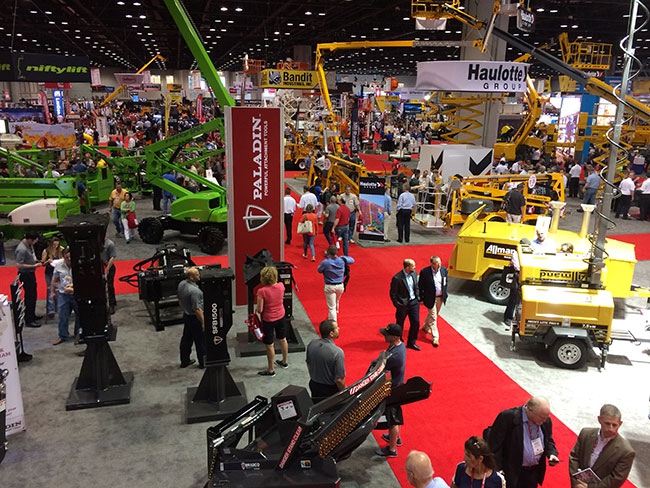 Vendors and rental operators from all over North America reported better business conditions on the floor of The Rental Show. Many pointed to a rebound in oil prices driving activity. The Rental Show 2017 in Orlando

“Everybody is positive. When they are positive, that means the year is going to be great and the show has been great for us, too. What you find at The Rental Show is a high-quality attendee and we like that,” said Roger Euliss of Allen Engineering Corp.

Each day, as soon as the doors opened to the trade show floor at the Orange County Convention Center, attendees started streaming into the North-South Building, ready to complete orders as well as find new products and services. Even with the ebb and flow of foot traffic on the show floor during each day, anyone walking the aisles at any time could hear the rumble of the cumulative noise from the crowd.

Jason Stanczyk of EDCO said his company was pleasantly surprised. “Our receipt count on the second day of the trade show was the best day ever for EDCO at The Rental Show. I didn’t have time to talk with anyone besides buyers, it was that busy,” Stanczyk said.

Doug Robertson of Robertson Rentals in Swift Current, Sask., said he likes to come to show to see all the products and talk to the people he is buying from. “If you’re having problems with any of the products, you can ask them questions. It’s one of the best trade shows I ever go to because of the quality of the products.” he said.

“We have had lots of traffic, made lots of quotes on the first day and we have a steady stream of people coming back to close on things,” said Clay Eubanks of Takeuchi Manufacturing. “People had a great year last year and they are very optimistic for the future. The optimism level is at an all-time high for us and for the rental industry in general.”

Matt Fearon of Genie shared a similar impression. “The sentiment is more positive. It’s like the second half of last year, people started feeling better and it has carried over. There is an optimism out there right now with all the talk about increases in infrastructure spending. Oil has stabilized and we are seeing those involved in the oil industry feeling better, too.”

Vendors and rental operators from all over North America reported better business conditions on the floor of The Rental Show. Many pointed to a rebound in oil prices driving activity.

Canadian business
As is customary, the Canadian Rental Association (CRA) held its annual general meeting Feb. 27 during The Rental Show. The meeting was co-chaired by Tim Ranson, CRA national president and Dave Mintenko, chairman of the board. The membership approved the usual business portion of the meeting after which Ranson gave a recap of the board’s actions over the past year. Next up, CRA insurance director John Gillespie from Western Financial, gave a summary of the protected self insurance plan and mentioned that members would be receiving a 22 per cent rebate this year – the second largest since the program started.

Finally, a number of awards were presented: