This year’s Challenge consisted of mid-size, full-size and HD entries – ten trucks in all – vying for a win in what is now its 11th year. We tested 10 2018 pickup trucks covering the 2500 HD segment. Two midsize and five full-size pickups completed the rest of the 2018 entries. A complete list of scores by model follow, revealing our choice for the winner of the 2018 Canadian Truck King Challenge. 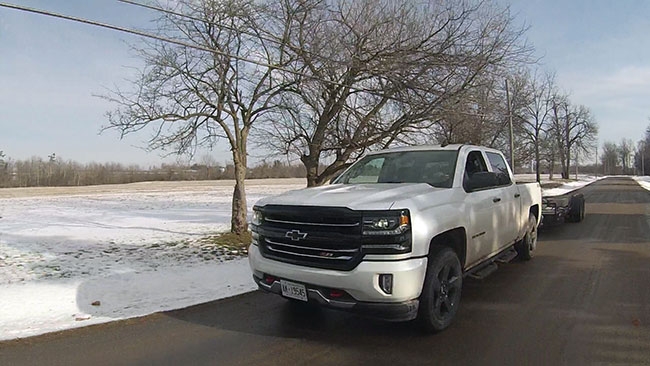 This year’s Challenge consisted of mid-size

The Testing Method
As most readers know the Canadian Truck King Challenge does what we call “real world testing”. Our journalist judges drive the trucks on a prescribed course empty, then with payload and finally towing a trailer on this same route, one after the other, back to back. This year judges drove more than 3,000 kilometers during testing while scoring each truck across 20 different categories. These totals are then averaged across the field of judges and converted to a percentage out of 100.

The HD trucks and the midsize category used our usual Head River, Ont., test loop while half-tons were tested on a new loop in Halton Hills, Ont., using the same method.

The weights we use never exceed those published manufacturer limits.

Fuel Economy
Each year we use electronic data recorders during testing to capture real world fuel economy. An outside company, FleetCarma, collects, and translates the data from each truck giving us a unique fuel economy report.  One that shows not only empty consumption, but also consumption while loaded and while towing. For these 2018 models the study is available at our website, truckking.ca.

The midsize segment was particularly interesting this year as both the contenders were specific off-road models. Toyota supplied us with the Tacoma TRD Pro and Chevrolet sent us a ZR2 Colorado diesel. We were fortunate to get these early in the fall, when there was lots of rain and mud. As with all the contenders this year, we shot video matchups which you can view at our YouTube channel. Through our website just look for Truck King TV – links to all the 2018 test videos are listed there.

2018 Half-Ton Trucks
The half-ton segment, which makes up the bulk of the Canadian pickup market, was fully represented in this year’s Challenge. We tested trucks from Ford, Chevrolet, Ram, Toyota and Nissan. Each manufacturer supplied a truck of its own choice. They decided which trim or accessory package to apply; as well as the choice of engine.

2018 2500-HD Trucks
Testing of the Big Three HD diesel-powered pickups took place during the first real cold snap in November. The weather was nasty. I remember thinking that for truck testing, in Canada, it was actually appropriate because unlike magazine awards that come out of the deserts of California or Texas, Truck King is homegrown, tattooed red and white and very often frozen.

About the winner:  2018 Chevrolet Silverado 2500 LTZ Z71
The winner of this year’s challenge is a truck that has been refined year after year adding technology and improving its diesel engine. It’s now, in the opinion of the judges, the best 2500-series HD hauler on the market. This 2018 version of the Silverado HD came to us equipped with a new generation of the 6.6-liter V8 turbo-diesel. Its been redesigned with a new cylinder block and heads. Its oil and coolant flow capacity has been increased and the turbocharging system is now electronically controlled. Horsepower has increased to 445 and torque now reaches 910 foot-pounds. Ninety percent of both numbers are achieved at just 1,550 RPM.

A new two-piece oil pan makes the Duramax quieter and also houses an integrated oil cooler with 50 per cent greater capacity than found on the old engine. Of particular interest to Canadians will be the new Duramax cold-weather performance. With microprocessor-controlled glow plugs the engine requires less than three seconds to preheat in temperatures as low as minus 29 C. These new ceramic glow plugs adjust current to each plug based on outside temperature. This new engine continues to be coupled to the Allison 1000 six-speed automatic transmission, which has a stellar reputation.

Also new is a redesigned air intake system, which uses an integrated hood scoop that traps snow, sleet and rain. It drains it away from the breather allowing cool dry air to get to the engine without clogging it up.

Visual help is found in the Chevrolet MyLink with an eight-inch-diagonal touchscreen. Of particular interest is the camera system that broadcasts on this centre-mounted touchscreen (now standard on all models with a cargo box). It shows reversing images that make hooking up easy, whether it’s to the bumper hitch or the in bed’s fifth wheel.  An around–the–truck view assists in parking manoeuvers. While driving, the signals now activate cameras in the mirrors showing images down the side of the truck, highlighting the blind spot. Other improvements include an available gooseneck/fifth-wheel trailering preparation package that includes a spray-in bedliner.  Electronic upgrades include wireless phone-charging, a remote-locking tailgate and 4G LTE Wi-Fi right in the truck.

Thank you and congratulations to all the participants and winners in the 2018 Canadian Truck King Challenge. For more detailed information on all of this year’s entries please visit truckking.ca.