Our annual look at the latest mid-size pickups 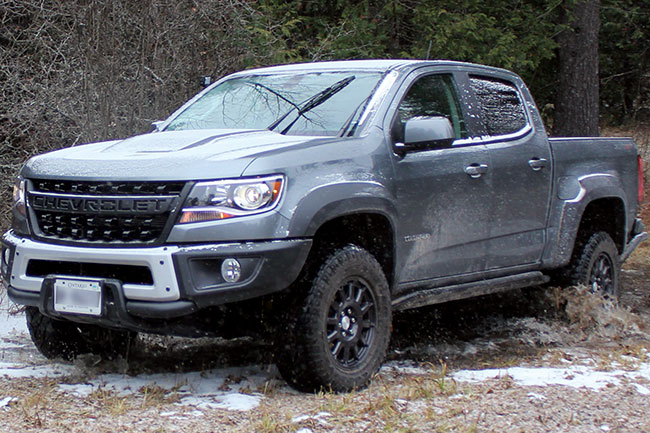 Your trucks are the lifeblood of your business. Once again, Canadian Rental Service has drawn on the services of Howard Elmer and Mario Cysinski, Automobile Journalists Association of Canada-accredited writers, to give us the lowdown on the 2020 models.

“The Canadian Truck King Challenge focused on testing the mid-size truck segment this year. As to the why? Well, we look at what’s happening in the truck world and test what Canadian truck buyers are most interested in as each model year rolls out. And, right now, the mid-size segment is exploding,” said Howard Elmer, the founder of CTKC.

Toyota entered two trucks in the Challenge, with a 2020 Tacoma TRD Sport, which is more of a truck designed for street driving, and a 2020 Tacoma TRD Pro, which is the models most off-road-capable truck. Both trucks were equipped with a 3.5 litre dual overhead cam V-6 with variable-valve timing, with the Sport being a six-speed manual, and the Pro a six-speed automatic.

General Motors entered its Chevrolet Colorado ZR2 Bison, the most off-road-capable version of the Colorado. It was equipped with a 3.6L V-6 DOHC engine mated to an eight-speed automatic transmission.

Jeep entered two versions of its all-new Gladiator truck. One was the Overland version and the other was the Rubicon off-road version. Both were equipped with a 3.6L Pentastar VVT V-6 with Stop-Start mated to an eight-speed automatic transmission.

CTKC tests the trucks using real-world situations. Trucks are driven empty, with payload (500-pound barrels), and with trailers (4,000 pounds) – the way the trucks would be used in the real world. This year, the Challenge incorporated an expanded off-road course to test each truck’s off-roading capabilities.

“This ritual of back-to-back driving over the same 20-kilometer test loop is what makes the Truck King Challenge unique,” said Elmer. “This routine gives each judge a chance to “feel” the differences in each truck as they drive over the same course – again and again. Over two very long days they managed to collectively drive over 2,000 kilometers around this course.

After two days of testing, who was the winner?

The CTKC winner for 2020 was the Chevrolet Colorado ZR2 Bison, and it wasn’t that close as it won by six points over the runner-up Jeep Gladiator Rubicon. For comparison, the other four trucks were separated by a total of 2.5 points.

CTKC with the help of third-party company, FleetCarma, used data loggers to get real-world fuel economy for all five trucks. A report was created, which showed each trucks fuel economy while empty, with payload, and with a trailer.

While not as popular as their full-size cousins, mid-size pick-up trucks are seeing an increase in interest and sales. As full-size trucks are becoming bigger and bigger, many are turning to mid-size trucks to get more of a right-size vehicle.

A look at the Ford Super Duty
Around 10 years ago, one of my first truck events as an automotive journalist was for the 2011 Ford Super Duty. The event took place in Arizona, starting in Prescott, going through Yarnell, and eventually finishing in Glendale, a suburb of Phoenix. During that trip, the Super Duty was put through its paces, with towing being done in Yarnell, where vehicles would go up and down a steep mountain road with trailers attached. Also, off-roading, and a selection of upfitted models were available to test at a quarry not far away.

Flash forward to 2020 and Ford decided to return to Arizona for launch of its 2020 Super Duty. While the route was changed, the mountain road in Yarnell and the quarry used were the same, apart from a completely different off-road course. More on that later. Being in a similar location showed just how much the Super Duty has evolved.

Many of the increases in power for 2020 can be attributed to the new fuel system, the steel piston heads, the double-axle variable geometry turbocharger, and the variable-displacement oil pump. The Power Stroke has also seen enhancements to the structure for the cylinder head, block, connecting rods and bearings.

“Super Duty customers have demanding and diverse needs – from towing heavy trailers to repairing critical infrastructure,” said Kumar Galhotra, Ford’s North America president. “Productivity is their lifeblood and their truck is their biggest tool. Our new Super Duty has more power, more payload and towing capability and better technology than ever to help these customers build a better world.”

To test out the all-new Tremor off-road package available on the Super Duty, Ford with the help of quarry staff, set up an off-road course in and around the quarry. Years ago, when the event was held there, the course consisted of driving around a somewhat large hill, with a few bumps thrown in. This time, it was one of the best off-road courses on the press trip. It included rock crawling, water fording, driving up and down inclines nearing 35 per cent and many other obstacles thrown in for good measure. It really shows how far the Super Duty has come in terms of off-road capability.

While the regular Super Duty is a capable off-roader, for more intense terrain the Tremor package is a must. What does it offer? Water fording of 33 inches; an approach angle of 31.65 degrees; a departure angle of 24.51 degrees; trail control with rock-crawl mode; 10.8 inches of ground clearance; a 53:1 crawl ratio for 7.3L models and a 44:1 crawl ratio for 6.7L models; suspension updates; and 35-inch tires on 18-inch wheels. The Tremor package is available on all trims (apart from XL and Limited) for F-250 and F-350 and with 6.7L or 7.3L engines.

One other option that is all-new and available with the Tremor package is a 12,000-lb winch from Warn. This is a factory (or dealer)-installed option, that integrates a winch into the front bumper of the Super Duty. This makes it more integrated and, as an added bonus, it is crash tested. It comes with wired or wireless winching, and a clutch that can be accessed right at the front of the vehicle.

Mario Cywinski is the editor of Machinery and Equipment MRO magazine, a member of the Automobile Journalists Association of Canada, and a judge for Canadian Truck King Challenge.